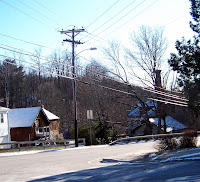 The tour does not include Water Street because in season the greenery makes the buildings on the 1856 map and Paran Creek invisible. The other 6 months of the year there is visibility from the side lawn of the Library. The Water Street side walk is also located on the west side of the road, away from what one would hope to view.

Walking up hill, west from the McCullough Library, corner West and Main Streets, North Bennington, Vermont
GREEN TOUR
In 1856, the Boot and Shoe Factory sat on the right side of West St. with the Union Store (#3) to its north, a tin shop to the west. On the left was the Hawks & Co. mill. 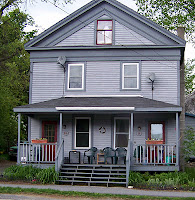 # 27 – Doty Hall, which housed tailor shop and a shoe shop in 1856, was built by Asa Doty as a private school with a second floor auditorium. While the school is a box topped by a stylish pediment, its location and its lack of detail give it much less presence than the stores at Lincoln Park.

#28 - Built in 1827 by Asa Doty, this house matches the Hammond and Welling houses. Its fan light has the same row of balls. About 1850, it was ‘up-dated’ with Italianate details: the corbels under the roof, a bay window on the east side. The Park family lived here while their summer mansion was being built in 1864. 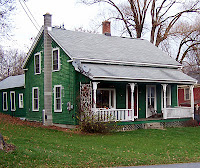 #29 – RW Bangs House, probably c.1830, as the entrance is centered on the front under the roof slope. The shape has not yet been turned so that the gable end faces the street.