how 'deep' a shadow?

This week I went to see the pilasters Jack Cadwell is building for the 1795 re-created entrance.

Of course, they look fine: shiny and new, true copies of our shop drawings.

We like them. We know they will look fine. The details that will make us wince may be glaring to us, but invisible to others. In fact, one of us will probably be aware of how something could have been done better that the other of us doesn't notice.

I will be looking especially at the shadows: are they strong enough? too deep? And at proportions: We aren't making an exact copy: we have nothing that accurate to go by. But did we catch the sense? If not, what exactly did we miss? Did the pattern and proportion put the emphasis in the right places? Does the entrance work as a whole? Does it all 'integrate seamlessly'? (How about those fancy words?!)

This something I can't gauge now because the grain of the wood of the columns is so prominent and I am seeing the parts from 20 ft away, not 200, under interior lighting. The subtlety of proportion and pattern will not be visible until they are painted, assembled with the fan and its surround, and set in place, framing the door - at which point any mistakes we made will be too late to fix...
No comments:

a reason why those old houses look 'right'

'The Country Builder's Assistant', 1797, is Benjamin's first book. It was written before the factories in Shaftsbury and North Bennington, Vermont, began to mass produce metal squares.

I am thinking about why those squares were so successful (thus my research on measuring) and how they changed how we build. (Did true squares cause square rule framing techniques to develop out of the centuries old scribe rule tradition?)

So as I read this early pattern book, I was thinking about what was normal - what was the expected training of the carpenters who used the book?

Here's a paragraph which accompanies the first plate:
Note: 'Architraves' are now 'casings', the trim that goes around windows and doors, Friezes and Cornices are added above.

Hmm, no inches and feet, just proportion: the size of the second part determined by the size of the first. Benjamin spells out what he thinks the relationships should be. No dimensions - just 'parts', parts of a whole.

So while I think I'm researching measuring and metal square, I realize I am understanding the reason for something else:
These buildings still feel right because their pieces weren't just added on as today we might 'stick' a windows here or there. Nor was the size of the window decided because someone 'liked' it and thought it 'felt right'. They, actually all the parts, were sized and proportioned to the whole. They belong. And that sense of wholeness resonates with us still. 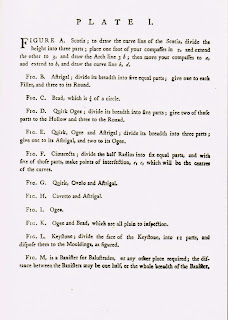 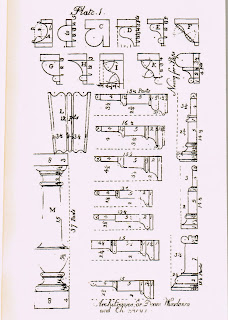 Yesterday I received a telephone call from Abbot Lowell Cummings. I had written to ask his advice. I thought I might receive a note about when he would be available for a brief meeting. Instead there he was, on the phone!

For you who don't know, Professor (Emeritus, at Yale) Cummings was at SPNEA (now called Historic New England) for many years. He is well known for his basic research on post and beam houses (First Period) in Massachusetts, pre-1715. He also has encouraged many students and researchers over the years. Often when I find some good writing on Asher Benjamin I find a note from the author that refers back to Abbot Cummings.

We discussed books. He suggested some I didn't know, and will now read. But I've only missed a few. We discussed picky points about Asher Benjamin: who trained him? Who helped him go from finish carpenter at the Hathaway House in Suffield, CT, to his first book, "The Country Builder's Assistant"? What about all that geometry and concern about structure in his books, the parts that most historians ignore?

What a delight - to share perceptions with someone I admire! And to be on the receiving end of some of that support!

Continuing to teaching myself how to load pictures (a long slow process), while working on the 1795 House's entrance.


The owners had an old picture of the farm, when 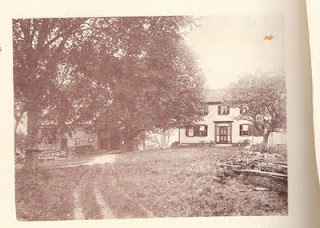 the barn was still there, the driveway dirt.
The entrance is simpler than the other local examples
-not as tall and imposing. It has an elliptical fan, and columns, a roof. But the columns stop at the fan, and there is no broad architrave (the piece above the fan) below the entrance's roof.

When I blew up the picture, it was clear the fan's curve ends with straight sides, maybe 3" high. The 'joiner' - the traditional name the millwork guy chooses to use for what he does -tells me this detail makes for an easier joint: 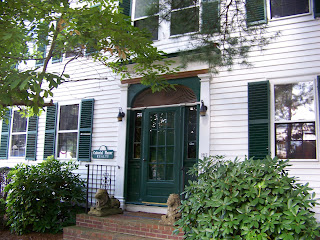 square instead of at an angle.

The other entrances in town of approximately the same date are both too grand to copy. The entrance we needed to recreate, as you can see in the photo, was lovely but less imposing.

So, what size was it? And what shape was the fan? 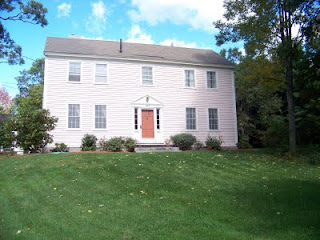 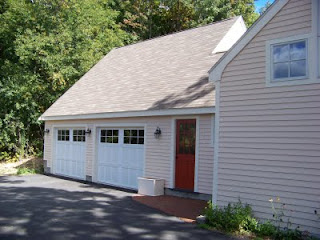 I had already added a garage, screened their back porch, and repaired their family room , a shed which was poorly attached to the house about the same time as the entrance was modified.

This was a new problem. We had an old vague photograph of the house taken from a distance showing the original entrance. We knew of two other houses in town from the same period but their entrances were grander than what our photograph showed. So what should the entrance be? Exactly how big ? What mouldings?

Luckily, I was working with a fine contractor and a millwork carpenter. We knew each other's work and respected each other's opinions.