This is the door of the Hiland Knapp House in N. Bennington, VT. 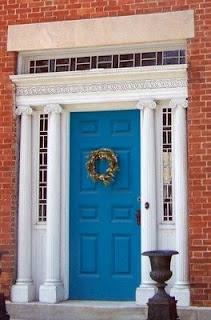 The drawing below of guiloche (paired ribbons flowing in interlaced curves around a series of voids, usually circular) is half of Plate LII from The Architect, or Practical House Carpenter, 1830, by Asher Benjamin. 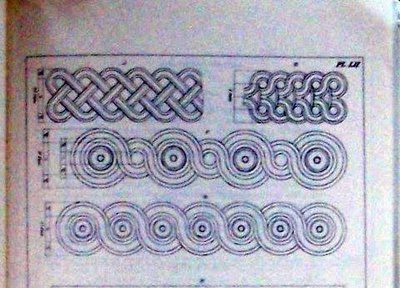 This close-up - of the frieze below the transom - shows almost the same guiloche on the door as is in the middle drawing:

But the pattern on the door is not an exact copy, and for a good reason. A 'running' pattern (like the one in the drawing) does not have a beginning or an end. But a front door is the visual focus of a house; it's not on its way to someplace because it is the place.

But, adding a curvy piece above the door emphasizes the whole entrance nicely while complimenting the Ionic columns. So what's a builder to do? A simple answer might be to put one circle of the guiloche smack-dab in the center above the door. But it's still a 'running braid': visually it doesn't stand still, it 'runs'.

The builder of this house came up with an admirable solution: the pattern starts from both sides, so that the ribbons meet in the middle, in an open circle. Now your eye traces the pattern to the circle centered above the door - and stops. Voila!

Over the past few months, I've been reading other people's writing and research on Asher Benjamin. One such scholar, architectural historian Abbot Lowell Cummings, has reviewed all the earlier pattern books (mainly English) that Benjamin copied. Yes, just copied - plate after plate. It turns out that Benjamin made direct copies from what can be found in earlier pattern books, most of them published in England. And at the time, no one seems to have said, "Hey! This is plagiarism!"

I find this interesting in light of conversations I've had about my own work and ownership of intellectual property. When I, an architect who works on old houses, design a new wing, I pay a huge amount of attention to how the existing house was designed. I am mining the existing house for visual knowledge that will help my wing compliment what's there. Sometimes I just plain copy.

But who owns the design that I copied? The original building may not have had an architect, so could it be the property of the carpenter, or the owner? Does it belong to me, because I adapted it? And should anyone even own it at all?

I'm pretty sure Asher Benjamin wasn't deliberately stealing the intellectual property of his predecessors - I doubt people even thought in those terms 200 years ago. I do think he really liked the designs he put in his first books, and he wanted to share what he saw. His own writing - like his paragraphs about light and shadow on mouldings - are so genuine and earnest, that I can imagine Benjamin choosing the plates for his book with the same passion.

So I'm glad no one slapped a lawsuit on him!
2 comments: