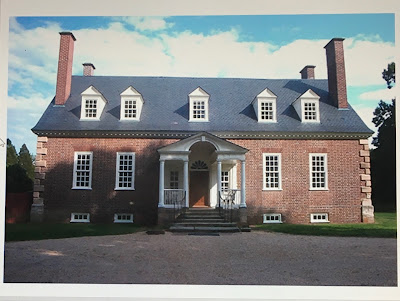 This post is about exploring Practical Geometry, getting lost, and finding the simple answer. I have used my working  drawings to show the process. Faint lines show where I erased possibility that didn't work.

Gunston Hall was the home of George Mason, a Virginia planter, with a big family, lots of land, and many enslaved people. He was one of the delegates to the Constitutional Convention in Philadelphia is 1787.

He was also a mason: he advised George Washington about mortar mixes.

When he had his house built, in 1754, he made the formal dining room and parlor (on the right side of the house in this picture) larger than the family parlor and chamber (on the left side of the picture). 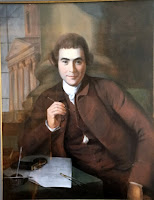 That meant that the house was not symmetrical around the door.  (To see this look at the spacing between the windows on the left and right sides.) The lack of balance might have distracted those arriving to either the north or the south entrance. However the small door and windows at the entrance were probably more jarring.

William Buckland, a young architect just come from England, solved the problem. The porches he designed are so inviting they make the asymmetry is almost invisible. More importantly they enveloped the existing entries. 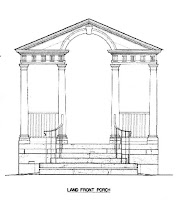 The geometry I suggested for the north porch never quite fit. I tried other solutions.  Nothing was much better. I could see the geometry of Buckland's design but I couldn't draw it.

Here is the HABS drawing of the north porch. 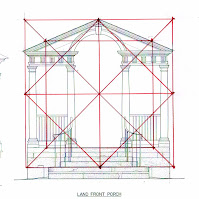 Here is my attempt to understand what geometry had guided the proportions of the design.

It's neat. It seems to work until you consider that the intersections of the lines do not tell the carpenters how to layout the porch, where the parts should go. The diagram is interesting, but gives no useful information. 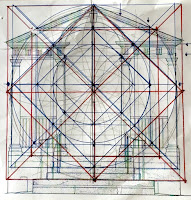 Here is a later exploration when I still wanted the diagram to describe the porch design.

Perhaps my initial square was too large, not based on the right width or height?

Would a  circle within its square work?

How about a daisy wheel ?  or an octagon?

The pencil lines, the red and blue inked lines are finally just confusing. 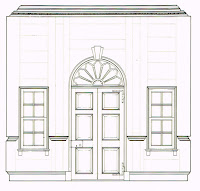 6+ years later I changed the question. Not, "What geometry did Buckland use?" Rather, "What was he given?"

I knew this. I'm an architect who works with existing houses. My first questions about a house are, "What's here? What are the existing conditions?"

The HABS drawing of the Hall show the north wall, a door with a fanlight and small side windows, a baseboard, a chair rail and an expanse of upper wall with some crown molding.  This is what existed, and seen from the outside,  just too little. 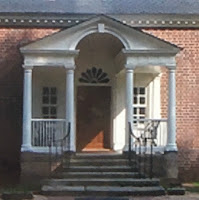 I realized that the main problem was not the lack of symmetry, it was the dinky entrance. The door and lovely fanlight are dwarfed by the expanse of brick, the windows are minuscule.

Refer to my first picture of the house (above) to see how little the windows are compared to the windows on either side.

Buckland couldn't change this; he had to work with what was there. 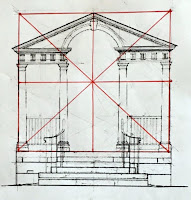 What were the existing dimensions?
One was the height from the sill of the door to the eaves of the roof. Buckland could add inches by adding a step down, but he couldn't easily go higher.

The second dimension was the width. His width couldn't be so large that it drew attention to the uneven spacing of the left and right windows. And: the porch needed to be centered on the door,to  enhance it and its fanlight. The side windows had to be integral to the design.

He used the given height for his width. He drew a square and added the diagonals and the mid-lines. horizontal and vertical. 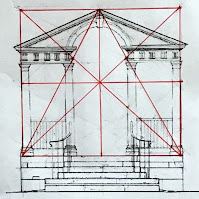 He added his Lines - upper center of the square to left and right corners.

The square was divided into thirds where the Lines crossed the diagonals. Placing the columns within the 1/3 of the width gave more importance to the door while keeping the rhythm, as well as keeping the steps wide and gracious, the porch airy and open. If the columns had been set on - not beside -  the 1/3 lines the design would have been static, staid.

The points where the Lines crossed the diagonals also marked the edge of the frieze (also called the architrave). 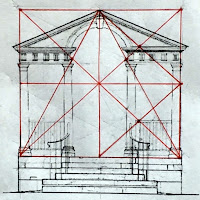 I have drawn these  Lines only the right side. The layout is hard to read  when all the Lines are added. On a framing floor. all the Lines would be marked and used to layout the frame. 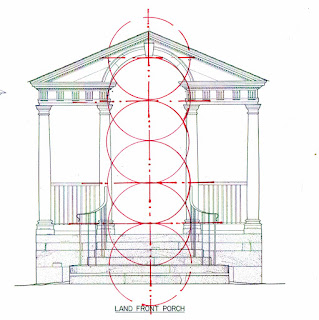 The arch draws our attention. The half-round shape makes the porch open and welcoming. It frames the main door and its fanlight - inviting you to the house.

Its diameter is 1/3 the width of the porch. It is part of the whole.

I've drawn it with its cascading circles because it's fun. I also wanted to note how the circle can be a tool for laying out a plan.

Palladio used a circle as his unit of measure: he called it a 'diameter'. His diameter was usually the column in his drawing. Although it's possible that the circle here was also the unit of measure, I think it more likely that it was one element Buckland knew how to use, one that would enhance and unify the porch with the house, especially as its diameter came from the basic geometry of the porch.

For an introduction to the Rule of Thirds see: https://www.jgrarchitect.com/2020/08/lesson-6-rule-of-thirds-part-1_21.html 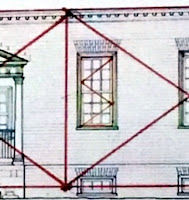