Corn Cribs for the Indiana Barn Foundation Workshop and Keynote

July 19-20, 2019, I will give a workshop and the keynote address on Practical Geometry for the Indiana Barn Foundation at the Oakwood Retreat Center in Selma, Indiana.
Their website is : http://www.indianabarns.org/ 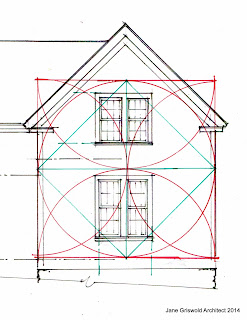 The picture they used for their announcement is the one I use on my website: It's a farm house north of Boston built about 1830 which was designed using a wonderful combination of circles and squares. I hadn't planned to include it in the talk but now think, of course, I will. 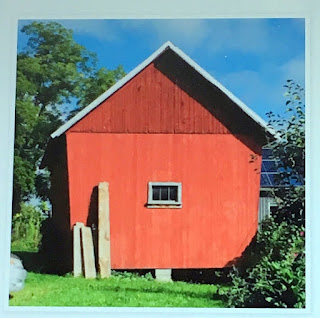 I might have chosen this picture of my corn crib as it is a barn out-building - and because it is red!


2 more corn cribs will be part of the lecture and probably the workshop.
They are from different construction traditions in different parts of the States. utilitarian buildings, built without frill, their forms easy to understand and read. They all use geometry differently.

The front of the Knight corn crib in Flatbrookville, Sussex County, NJ, shown here, is one of 3 HABS photographs of the crib. taken in 1969.

This is the quote which accompanies the photographs and drawings.
"Within this farm group that developed between 1826 and 1910, two significant structures are the corn crib and hog barn. The corn crib is an excellent example of early corn cribs in the Delaware River Valley, featuring a frame that is hewn and pegged."
This corn crib in New Jersey is therefore about the same age as mine in Vermont; they are not the same. 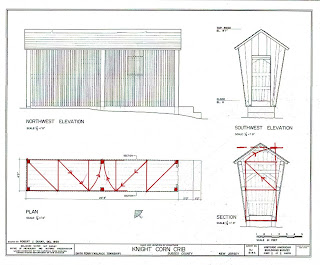 Here are the HABS drawings.

It is so different from  my Vermont corn crib that if the sides did not slant I would have thought it just a shed.

The layout is governed by its width. The posts are placed  by 2 red squares and the arc of the squares' diagonals.
The same sized  2 red squares and the arc of the diagonal determine the height of the crib and its roof.
A crew could lay out the plan on site with twine,
then layout the section of the crib on a framing floor with twine,  cut the frame and assemble it on site. 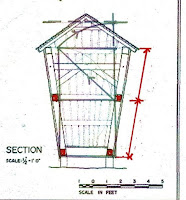 The slope of the walls is set by the square: the sills - noted in red - are located inside the lower corners of the square, the mid-plates - also red - are located on the outside of the upper corners. the slope continues up to the height of the upper square.  The red line on the right indicates that the height of the wall is divided in half by the center girt.

The upper brace in the section falls on the point where the diagonals crosses the arcs of the side of the square - noted in red.
I have seen this only once in New England. The center brace is on the line of the squares.
The lower brace is not located on the arcs. Instead it is centered between the floor and the mid-brace.

To see the HABS photographs and drawings, type the name and location "Knight corncrib... " into your browser.

This bibliography was first complied to accompany a lecture on Practical Geometry in 2016. It is now available whenever I present.

A list of books by and about builders and architects who used Practical Geometry; many are primary sources.
At the end are other sources, websites, and credits.
It does not include books I refer to in a specific post. For example: Audel's Carpenters and Builders Guide, Theo Audel & Co. Publisher, NYC, 1923, is footnoted at the end of that post: https://www.jgrarchitect.com/2018/11/lines-in-historic-and-modern.html.

A few are books on architectural history and technology which I reference regularly:  Bannister Fletcher's History and Knight's American Mechanical Dictionary.