John Haviland and James Watt with their compasses

Portraits of master carpenters and architects with their compasses are part of my presentations: how I show people that we really did use geometry and compasses for design and layout.

I collect these images as someone else might collect old maps or historic recipes. 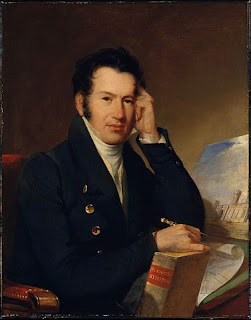 This is John Haviland, 1792-1852, an emigre to Philadelphia. He designed many Gothic inspired public works around Philadelphia.
The portrait is now in the NY Metropolitan Museum of Art. I have cropped it so his compass (which shines) can be clearly seen.

Like Owen Biddle, Haviland taught 'carpenter's assistants' in Philadelphia. In 1833, 28 years after Biddle's death, he reprinted Biddle's pattern book.
He also wrote his own 3 volume pattern book, beginning in 1818. The Met has one copy; the other is in a library in Australia.I have not yet read it. 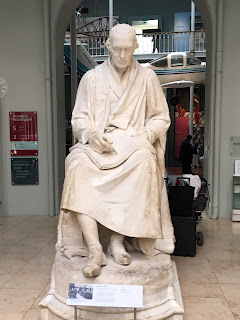 James Watt  (1736-1819) was a famous Scottish inventor and mechanical engineer.

Soon after he died Sir Francis Chantrey was asked to create this sculpture to honor him.
Watts is shown designing the double acting beam engine. a new and powerful steam engine which changed manufacturing. It drove machinery all over the world.
Note that he is designing with his compass. 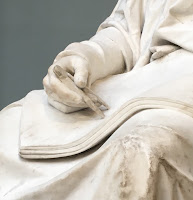 This sculpture sits in the entry hall of the National Museum of Scotland in Edinburgh. It is on loan from the Heriot-Watt University in Edinburgh, named after him and George Heriot.
(Heriot (1563-1624) was a goldsmith who left his money to educate the orphaned sons of freemen in Edinburgh.)

I had come to Edinburgh after presenting on Practical Geometry at the IPTW 2019 in Stirling, Scotland, September 5-7. I was enjoying the museum with friends, including a 3 yr old who needed to visit the sharks and dinosaurs, when I came upon James Watt.
What fun to share a 3 yr old's enthusiasm and come across one of mine in the process!

For an interesting look at James Watt and his world,  read this blog  written by an intern at the Engine Shed, the center (run by Historic Environment Scotland) where my IPTW conference had just been held.
https://blog.engineshed.scot/2019/06/17/5-things-james-watt/