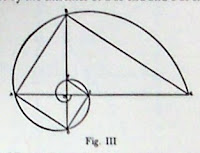 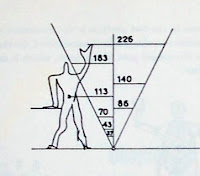 In 1815, Silas Hawes in S. Shaftsbury, VT, joined 2 legs of steel together to make a stable, true 90* angle carpenter square. Hawes patented his idea in 1819 and began manufacturing. (Iron squares did exist before this. Illustrations of them can be found in the pyramids and in medieval English carvings. There was one recorded in Plymouth in the 1620's, and another in New Haven, CT, before 1700.)

I became curious about these steel squares when I realized that there were several factories producing steel squares on Paran Creek, which runs from Shaftsbury, through N. Bennington to the Walloomsac River. Lots of factories because of lots of demand - one factory, swept away in a flood in 1852, was immediately rebuilt.

At the same time Asher Benjamin is publishing his pattern books

.
And post and beam framing systems are evolving from scribe rule to square rule. This is a change from each tendon fitting only one mortise, to the parts being interchangeable. For example, a brace could fit between the post and beam (sill and stud in the illustration) at the front of a barn or at the back.

Do these facts have anything in common?

A joiner needs to know the angle he uses will be the same each time, dependable, before he can make the same part to be used many places. He needs to own a carpenter square even if it is expensive, and it was - at least a week's pay.

Does the manufacturer of many, many carpenter squares in Vermont a play a role in the evolution away from design using 'regulating lines'?

The Eagle Square sign comes from The Shires of Bennington, published by the Bennington Museum in 1975. The illustrations were drawn by Edwin Tunis for his book, Colonial Craftsmen, the World Publishing Company, 1965.

glass for Show and Tell

These items were part of the 'Show and Tell' we assembled for the forum on windows at the Dorset Historical Society in February. Choosing the pieces made me look more carefully.

The first is the piece left over from blowing glass. Today we call it a 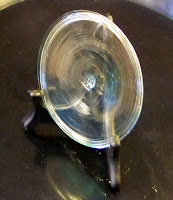 bulls-eye. It can sometimes be seen in the transoms over front doors in old houses. In the center is the closed-in hole where the molten glass was attached to the pontil - the tube the glass maker blows through. The swirls were caused by twirling the soft glass to thin it out to a plate about 5 ft. across which could then be cut into window panes. This was how glass was made before 1800. This center part was basically waste that someone found a use for. 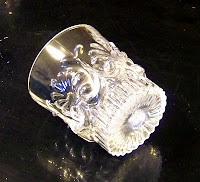 The second is a reproduction Sandwich glass tumbler c. 1830, made with a 3 piece mold. I tried to photograph it so the light would shine at one of the seams. The use of a bucket to pour the molten glass into a mold instead of blowing up the glass glob on the end of a tube was a major change. Flat glass techniques changed too so window panes could be bigger. 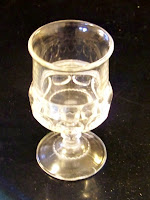 holding a seamless bowl. Wow! Compare the technology involved to mass produce this - buckets that were filled, moved and tipped, molds that closed and opened, machinery that brought the two parts together while they were still mailable - to the simple tool used to blow the bull's eye, the way of making glass for that had been used for centuries.

I also had a piece of window glass, c. 1900, with some waves in it. Extruding glass with a smooth surface was not easily done until around 1940. 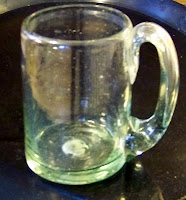 brought a modern art glass tankard because it showed the molten qualities of glass so well.
And here I was surprised at my response. This is the mug I use at home. Now I saw the air bumbles that mean the glass wasn't as carefully blown as early window glass was. It had the pontil mark - the place where the molten glass was attached to the blowing tube, and I liked seeing how the mug was made. But the piece was heavy, not light and airy. The glass was thick, not clear and delicate. The light shone through the others 'better'. The handle was just a snake, a blob of glass, crude.

I know the glass blower probably chose to make it like this - the nature of molten glass right there to see. But right now, partly because I understand the skills required to create them, I much prefer the other pieces.