James Gibbs' Book of Architecture, Draughts for a Menagery , Part 1 of 2 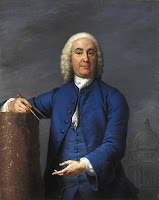 Here is the portrait of James Gibbs, British 'architect', though that title was not used. In 1722, the Commissioners of the new St. Martin in the Fields Church appointed him to be 'Surveyor of the Work'.

Note that he is holding the tool identifying his profession, a compass. His fingers hold it as if he is about to use it. *

His portfolio, On Architecture, published in 1728,  includes 150 plates: plans, elevations, sections and perspectives of buildings Gibbs had designed and built.

The Introduction - 25 pages long - describes each plate, but first Gibbs writes, "... such a work as this would be useful for... Gentlemen as might be concerned with building, especially in the remote parts of the Country, where little or no assistance for Designs can be procured." These "Draughts of useful and convenient buildings... may be executed by any Workman who understands Lines, either as here Designed, or by some Alternation..."** 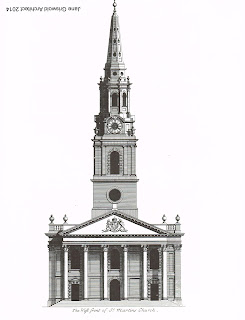 I wondered if I, like those Workmen, understand his Lines.

Could I 'read' how Gibbs used Practical Geometry?

Could I see how his manipulation of geometry could be copied by others in layout and design? Yes, somewhat. I started with a very simple design, his proposal for a building to house pheasants and their caretaker, Plate LXXXIV. ,

But first: what he is best known for:  St, Martin in the Fields, in Trafalgar Square, London. This is the front elevation. Gibbs included floor plans, sections, the other elevation as well as a perspective, 7 plates in all. 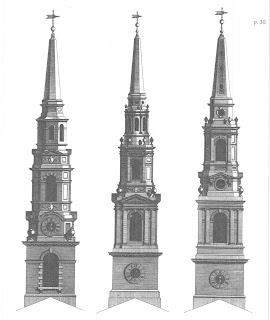 The book came here, to the Colonies. Plates 29 and 30 with  images of steeples, especially, inspired our church builders.

I am learning to understand the Lines of these. 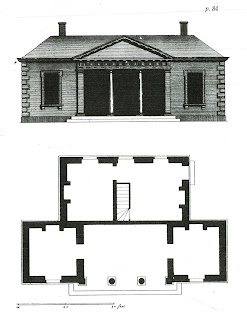 A Building for the Menagery

"Two Draughts of a Building for the Menagery at Hackwood. The Portico of the one is with Arches, and the other with Columns; having a room at each end, and two rooms behind for the person that looks after the Pheasants. That with the Columns is built."**

I looked at that building, the one with the columns. 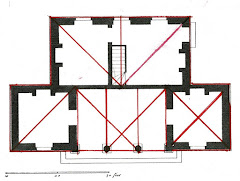 Its plan is composed of squares, all the same size. The wall thickness makes them appear to be different.

The layout is simple: 6 squares. 4 in the front with 2 crossed at their half points. Center 2 behind the front ones. Center the windows and fireplaces. Add a door, a stair, a nice front stoop.

The proportions of the center Portico is 3/2: the depth 2, the width 3. Or, one square and half of the next one. The Lines of the crossed squares locate the columns. The columns divide the portico into thirds.

See below for a step by step explanation. #

This plan is practical: the fireplaces are located so that 4 flues can be joined into 2 chimneys. The stair is offset to allow a wall to be easily set beside the centered window - if the stair had been centered on the back wing the left wall of the stair would have had to jog to miss the window. Living quarters often had a Hall - here on the right - sightly larger than the Chamber - on the left. 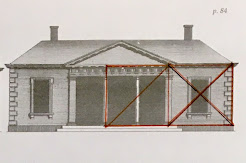 The height of the walls in the Elevation is based on the width of the square used to layout the plan.  The squares are crossed at the portico just as they are in the floor plan. 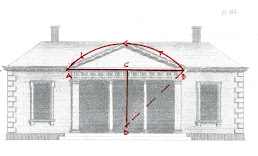 The pediment is laid out  by dividing the upper line of the cornice A-B in half, dropping this length plumb in the middle C-D, placing your compass with one point at D, the other at B, and drawing an arc B to A. " 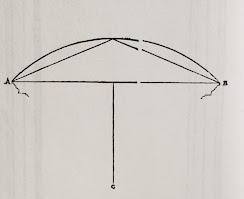 Sebastiano Serlio wrote in Complete Works on Architecture and Perspective, c.1555: "The highest point on the curved line will mark the required height of the cornice."  This sketch, almost an after thought, is at the end of a discussion about Doric proportions  in Book IV, On the Five  Styles of Buildings.

Gibbs might be copying Sebastiano Serlio. Or perhaps this way of sizing a pediment was standard knowledge, part of what Gibbs means when he writes of a 'Workman who understand Lines'.  This way of determining a cornice is  used by Wm. Salmon in Palladio Londinenses, explained in Asher Benjamin's pattern books, and seen over doors in Georgian New England. 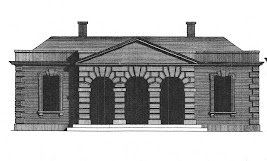 This Draught with Arches, is Gibbs' second design, the one which the owner chose not to build.

Hackwood Park is in Hampshire, UK, about an hour southwest of London. It appears to be private property and has been owned by several families since 1728.
For a picture of the menagerie in 2001 see: https://historicengland.org.uk/images-books/photos/item/IOE01/07844/01

# For a refresher on how Lines can divide a square, try this: Upper row, left square divided into 2 halves: your goal. 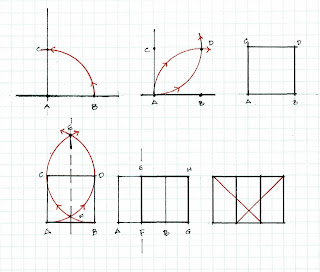 With your compass point at C and then D, swing arcs to cross at E and F. Now you have 2 points that allow you to divide your square into halves - the dashed line.  Place one side of your second square (darker black outline: E-F-G-H).

Note that the compass width, its setting,  is the same for the whole layout.

The last diagram, lower right corner: When I drew it I used 'geometric shorthand'. 2 crossed squares with diagonals to show how they related to each other.

This shorthand is very much like the notations we find when we uncover geometry on old frames and sheathing. They knew what they said. We've forgotten the language.

Note: I have found out that, of course, the design had nothing to do with the size of the pen required to house the pheasants.  The pheasants lived in a  wooden lattice work enclosure.

The menagery had a room for making and drinking tea and another for a library on flora and fauna. It would have been a destination for strollers, perambulating the gardens and grounds of the estate. So the requirements were 2 rooms, both with windows for light and fireplaces for heat and cooking,  a sheltered space for viewing the garden in sun or rain. And, yes, living quarters for staff, but invisible, ticked around the back.

With such simple requirements the menagery could be an abstract architectural ideal, a sculpture to show off the owner's erudition as well as a place where guests were welcome to dally.

*For James Gibbs and his compass in context   https://www.jgrarchitect.com/2019/10/people-with-compasses.html.

**For the books, including Gibbs' On Architecture : https://www.jgrarchitect.com/2019/06/bibliography-including-websites.html.