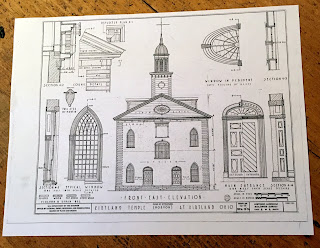 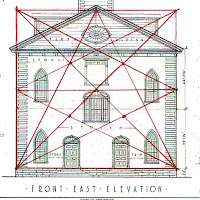 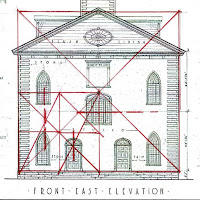 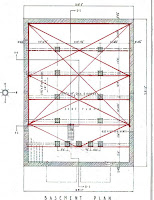 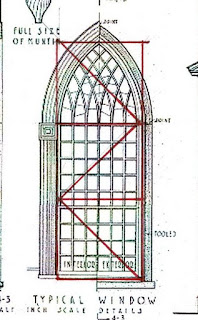 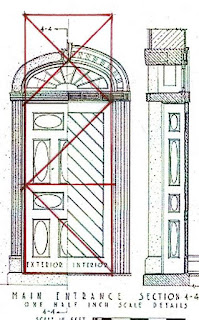 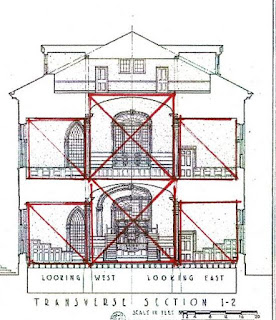 Finding a Simpler Way to Layout a Building

The builders knew how they were using Practical Geometry - where they would begin, how they would use the diagrams.
I don't.  I look at their frames, their finished buildings. I see a rhythm, a pattern. I try to discover the steps. When I can record a plausible geometry I draw it and write about it.

This year, fine tuning the power point presentations I would give 4 times, I thought that my diagrams were too complicated. Maybe not for a joiner building the main door of a church; but for the timber framers in a framing yard, I thought, "Too complex, too many lines!"

Asher Benjamin's design for a "House Intended for the Country" belonged in my presentation. My audience usually knew about Benjamin. If they didn't, I needed to introduce them to him and his designs.
As I added it, I saw how the center square was the main idea - everything else came from it. The width of the wings comes from the Arc of the Diagonal of the Central Square.  So simple! 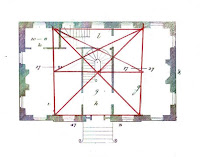 Then I drew the Central Square on the plan  - inside the walls as this was to give information to the men framing the interior.  The square, its Diagonal, and its Lines locate the entry hall width, the back edge of the curving stair and the wall for the upper left room, as well as the fireplace locations. The left and right sides of the house beyond the square are 1/3 the width of the square.


These are simple, small illustrations in a pattern book,  about 3" square, necessarily generalized. Even so, they convey the information needed by a builder to layout a similar house. 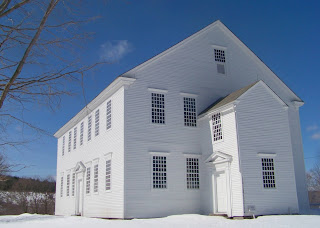 I then revisited the framing layout for the Rockingham Meeting House in Rockingham, Vermont, begun in 1780, finished by 1800.

Here is the geometry for the  plan. A center Red Square with its Black Posts  on the half and  thirds. The width is determined by extending each side 1/2 the square. The length is also extended 1/2 the square.  The Dashed  Red Lines show how the line extended located the posts on the exterior.
Note on the left how the stair wing is laid out on the opposite side of the Line. 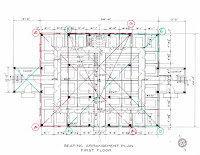 The geometry for the front elevation of the Rockingham Meeting House seems to be most easily laid out as I drew it originally.

That post is at: https://www.jgrarchitect.com/2014/04/rockingham-meetiinghouse-rockingham-vt.html
Details about the stair wings are included. 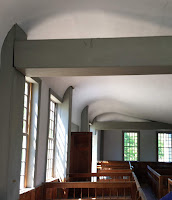 The  size of the meeting house could be seen as a 3/4/5 rectangle: 3 deep, 4 long. The post placement does not follow that pattern. Perhaps that is why the window placement on the front and rear elevations is not regular.

The post and beam placement required that the 2 windows on either side of the door be framed against the posts - a little tight.

The photograph shows hows the windows come against the posts. The exposed beams here holds up the gallery. That curved ceiling results from the slope of the floor above.


The Vail House geometry follows this pattern. I wrote about it here: https://www.jgrarchitect.com/2018/09/the-vail-house-c-1805-bennington-vermont.html


I have no name for this pattern. The previous name I used to describe this way of designing, "crossed squares",  is retired as interesting but too complex: not Practical.


Asher Benjamin, The American Builder's Companion, 1804,  Plate 55, 'Designs for a House intended for the Country'.