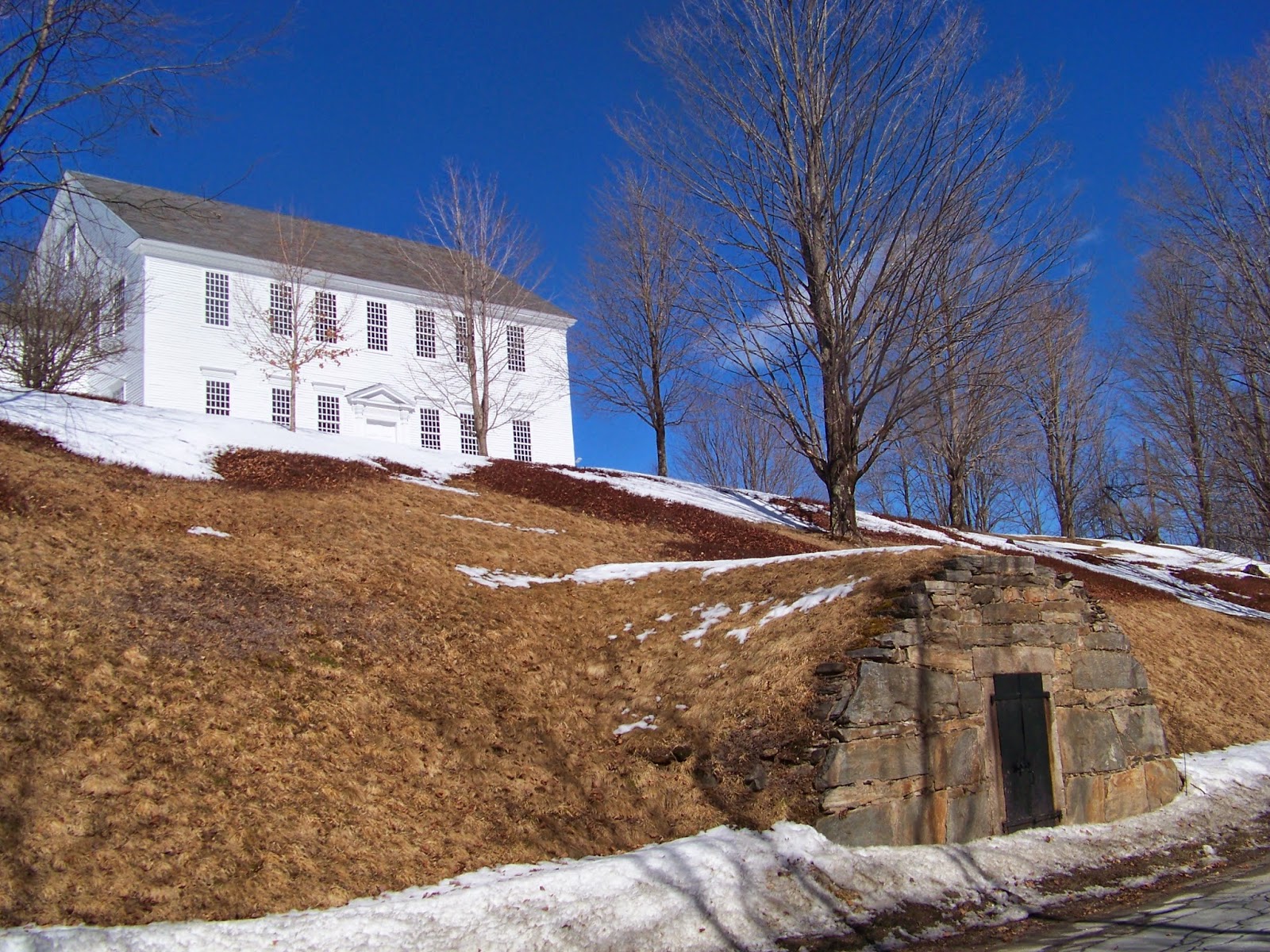 After some preliminary analysis of the design and frame I realized in 2014 I needed to see it. I wondered if it would be as spare as the Rocky Hill and Sandown meetinghouses which preceded it. 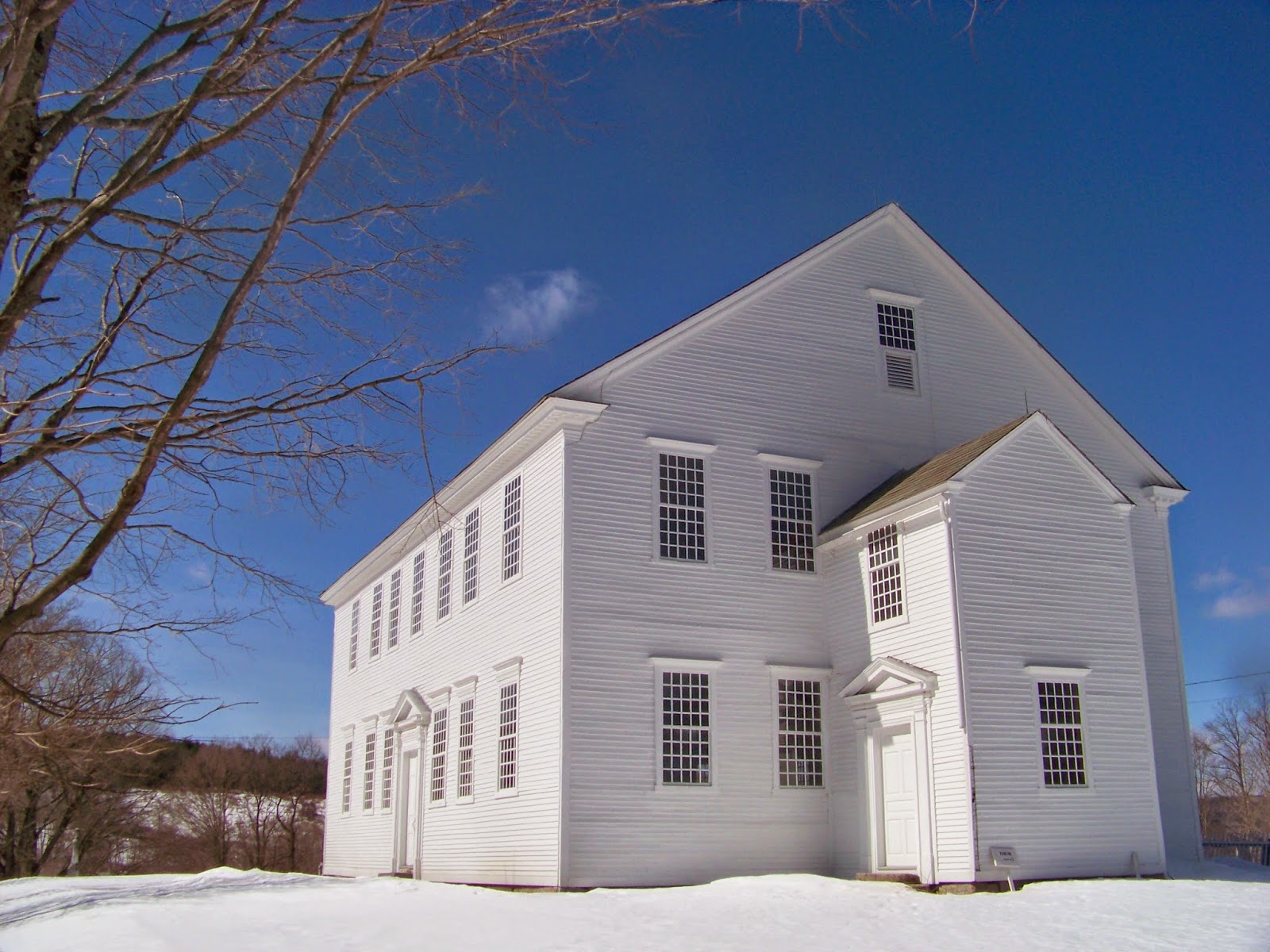 The site, on top of a hill with a view all around, emphasizes the simplicity of the structure. One can only come to it from below, and like many 18th c. New England buildings it sits upright and confident. It is very impressive.

I returned in 2018 and early 2020,  I updated the geometry as I learned more. I revised the drawings again when I gave a Zoom presentation in spring, 2021. What I first saw as a complicated geometry became simple and direct.

This is not a dramatic design created by a London architect like Robert Adam to wow his rich patrons. It is a meeting house for a rural community. It is a straightforward layout planned by master builder, John Fuller, for a simple timber frame to be erected by a crew of local citizens. 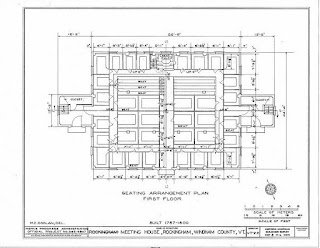 'General' John Fuller, the master builder, was also the architect, engineer, framer. He knew the meeting house required an open space in the middle so everyone on the floor and in the balcony could see the preacher in the pulpit - and be seen by him. The pulpit was centered high on one wall, a window behind,the balcony on 3 sides. 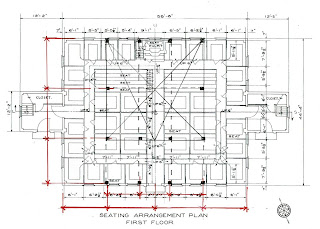 He laid out a 3/4/5 rectangle. noted here in red. Then he laid out a square in the middle which defined the open space and divided that into thirds to set the columns for the balcony and the posts for the frame. See the black square and columns.


He extended the column spacing - the dashed black lines - to place the posts on the front and rear walls.This made the balcony the same depth all the around.
The porches are squares set in the middle of the west and east walls. The exterior posts were set at the porch corners, not at the 1/3 points of the wall. This also allowed for 2 windows on each side of the porches. 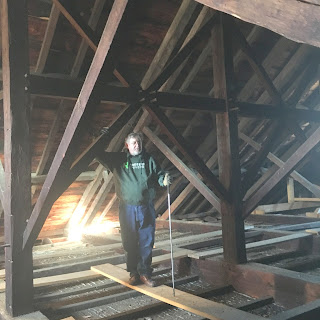 Those 4 closely spaced posts in the center support the 4 attic trusses which are braced together to span the width of the church and allow the center of the meetinghouse to be an unobstructed space.

Walter Wallace, standing in the joined trusses under the ridge, gives a sense of how big the framing is. 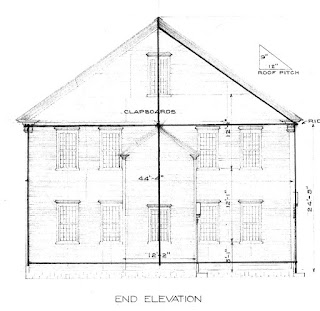 The HABS prints of the End Elevation and the Interior Section for the Rockingham Meeting House are hard to read but their basic dimensions are clear.

The End Elevation is composed of 2 squares. The roof is framed using the 3/4/5 triangle.

The notation to the right of the rafters says the pitch is a 9/12, modern language for the same thing. 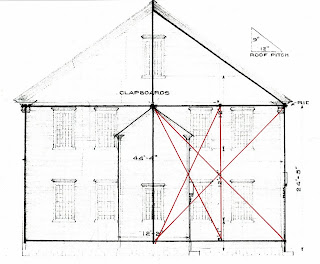 The porches, the name for the stair towers, are set in the center of the end walls. The diagram shows that if the overall width of the wall is 8 modules (each square divided into 4 equal parts) the porch  is 2 modules wide. 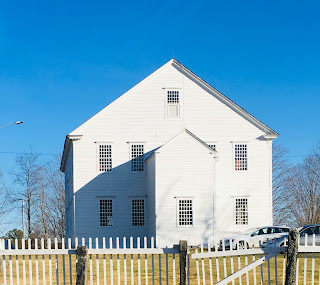 The proportions are 3-2-3, a graceful rhythm. If instead the massing had been 3-3-3 - all the widths equal - it would have felt dull.

John Fuller, Master Builder, understood how to create with those simple shapes. 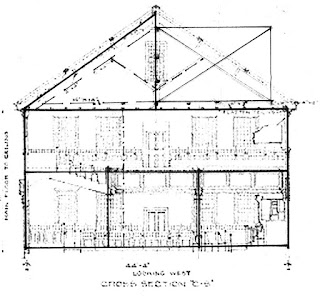 The Interior Section shows the roof trusses, all using the 3/4/5 geometry. I've highlighted them in black for visibility 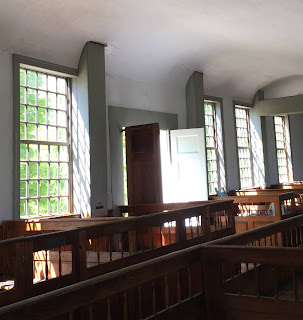 With his frame laid out, John Fuller now needed to place the windows. The 6 posts on the front elevation were fixed. To allow any visual space* between the 2 windows on either side of the main door had to framed against the posts.  Here you can see how they were placed; there is no room for casings.

* 'Visual space': the windows needed to be viewed as separate shapes, not as pairs. 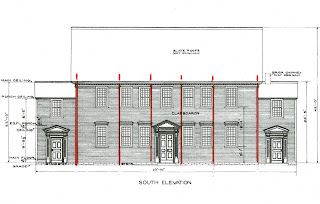 The red lines on the front elevation show the locations of the 6 bents for the meeting house.

One more window was needed on either side of the main entrance. 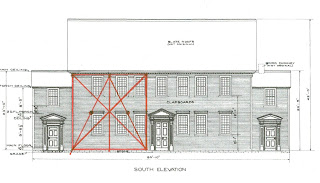 Where would they fit so that they were part of the whole, not call attention to themselves, and enhanced the main entrance ?

Fuller used geometry to place the outer windows in relationship with the others.

On the right side of the entrance is the front elevation as it was built.

On the left the outer windows are shown set in relationship not to the posts, but to their next closest windows and the left side of the elevation. The entrance is flanked, but not crowded by the windows.

The 'empty' wall to the left becomes part of the geometry. It shares the  proportions, being 1/4 of the wall. It is not 'left over'. 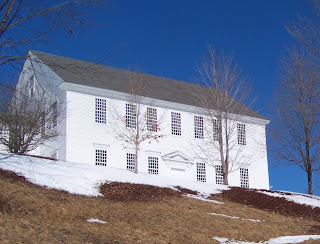 You can see the design succeeded. The uneven spacing between the windows is interesting and enlivens the facade, but it does not detract from the main door with its pediment. On either end the stretches of wall without a window anchor the meeting house to its site. 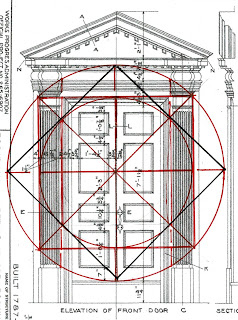 Here is the main door. Its height is the determining dimension. Half the height is the radius for a circle and its square, drawn in red. The rotated square is drawn in black. The intersections determine the width of the architrave, the columns. The location of the plinth blocks and the depth of the moldings in the architrave, over the door are governed by the sides of the smaller square to the original circle. 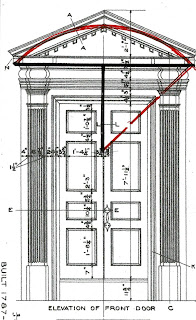 The pediment follows Serlio's instructions:
half of the width dropped below the base of the pediment - black lines - becomes the point for an arc whose radius -dashed red line - is the distance to the edge of the pediment. The dropped line is extended up to the arc; that marks the height of the pediment. 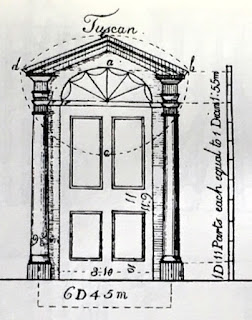 This way of laying out a pediment is shown in Asher Benjamin's 1797 pattern book: 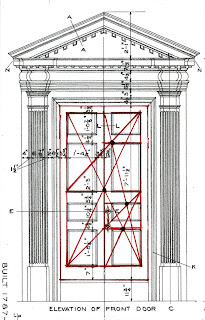 The door itself came after the frame was in place. It was built to fit the opening.

First the door's rails and stiles were laid out.

Then the Rule of Thirds divided the remaining space in half and sized the panels and the stiles between the panels.

Last picture: The windows on the sides of the meeting house were framed against the posts as they also were on the front and rear elevations.

Just as at the Rocky Hill Meeting House in Amesbury, MA, the eaves on the porches bump into those windows. Neither master builder had solved that problem. 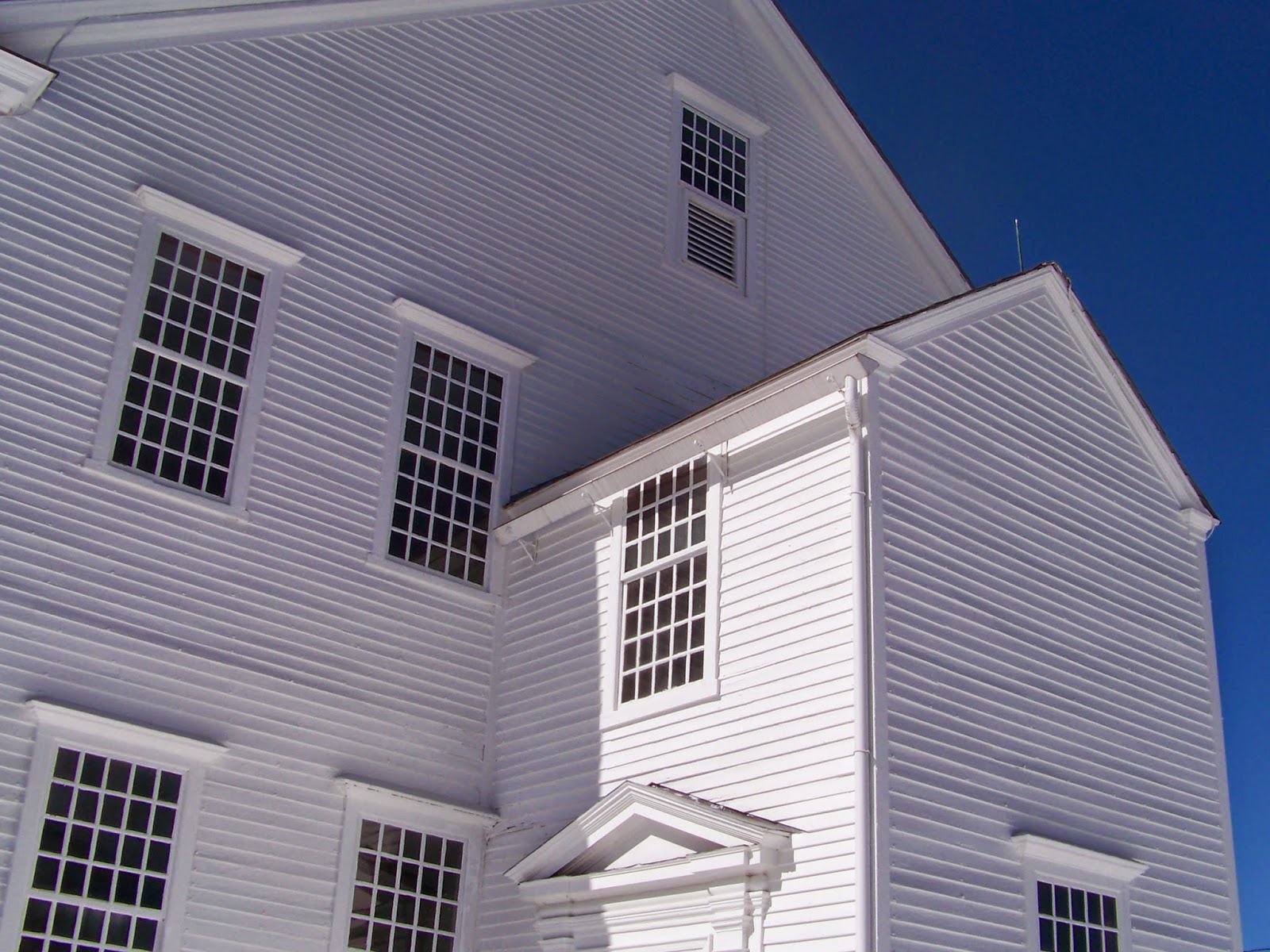 The Rockingham Meeting House is not included but the theory, practice, and evolution of the trusses used for similar meeting houses is laid out with clear photographs and Jack Sobon's drawings.