regulating lines - in this case, circles

Interesting - the place to buy a compass these days is in a quilting shop.
I wanted a good one, not the flimsy kind I had in elementary school. I wanted to see and touch it, so buying it on-line was not an option. I am still looking for a bigger one.

So, now I am playing! This morning I added circles to the sketch of Lorenzo.

The results are interesting. The radius for the arc of the fan light over the door has its center in the center of the door. The circle encloses the entry as it did for the 1795 entrance I just rebuilt.
The same circle fits the curve over the windows that unites the pilasters. The ellipse is the same curve as the fanlight coming back upon itself.

I know I like this. It is so simple, so straightforward: no wonder the house feels so right! The elements reinforce the important places. The parts speaks to each other, they're related.

It's also how architects and contractors on the job actually work. Imagine the mason thinking about the arch he needs to build over the door. He makes a wood frame to set in the opening so he can lay up the bricks from one side to the other. (Once the bricks are mortared in place the frame is removed.) Then he needs to span the spaces above, which happen to be the same width. So, use the same frame - obvious!

In 1800, masons did not have stone lintels to use over door and window openings. The brick arch spanned the distance. Here the arch transferred the roof load to the brick pilasters, leaving much less weight to be carried over the windows - structurally a smart idea. The arch, which had to be there, was not hidden. It generated the graceful design that still resonated today - art and science intertwined.

I also know I am working with a drawing based on a photograph and the scale is about 1 inch= 10 feet. Lots of margin for error. Still, it does please me.

The back cover of the brochure for Lorenzo, shows this picture accompanied by a good discussion of Vitruvius and his principles.

Unfortunately no one signed the article. I would like to discuss the ideas, especially 'regulating lines', with the author, but I haven't yet found a way. So I am posting this here. 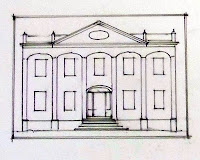 I don't think the star shows the regulating lines used to design the house. The star is not regular in shape. Shutters like the ones on the house in the photograph were not in use until about 20 years after the house was built, so those points are not important elements of the design. The pediment was also added later.

My sketch shows the basic elements of the original house: the shape of the facade, the pilasters which sit on brick pedestals that are part of the foundation, the arches which join the pilasters, the door with its sidelights and fan. The windows sit quietly between the columns. 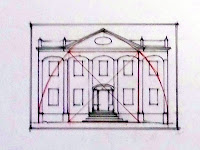 Here are the regulating lines - superimposed in red - that I think were probably used to determine the proportion, rhythm, and details of the house. These lines were easily drawn with a compass ( or dividers), one of the tools we know house wrights owned in the early 1800's. The center block of the house is a square. The width of the wings on each side is determined by the diagonal of the square used as a radius. The three bays in the center box are also the same width as the wings, and are delineated by the pilasters. The importance of the pilasters is emphasized by the pedestals in the foundation wall, the arches which join them, and the placement of the posts topped by urns in the roof balustrade. Curves, circles, ellipses draw the eye: here to the 5 bays, the door.

I played with the arch over the windows. Hmmm. It was a structurally sound way to finish the brick pilasters and create a frieze. It emphasizes the bays and formal composition. But the curve? The photograph is too small to figure out where the radius of that arc originates.