Asher Benjamin's pattern books have been an important part of my research library for as long as I can remember. My copies of his 1827 and 1830 editions, reprinted by Dover Publications, are dog eared from years of use.

I remember when his first book, The Country Builder's Assistant - originally published in 1797, in a small size that would have fit easily into a carpenter's pocket - was finally reprinted in 1989, and my family members gleefully gave each other copies for Christmas.

Initially, I used his books to study the trends - what builders and owners were thinking in the early 1800s - that I saw on the sea coast north of Boston, where I lived and worked. But I knew of only 2 actual copies of his designs, one in New Hampshire and another in Maine.

Then in the 1990s I happened to tour the Oliver Phelps House in Suffield, Connecticut, a house in which Asher Benjamin actually worked. Soon after that I moved to western Vermont; here I see direct copies of plates from The American Builder's Companion (first edition published in 1806), and The Architect, or Practical House Carpentry (1830). I've since acquired two later volumes as well - Practice of Architecture (1833) and The Builder's Guide (1839).

Want to read more? The wikipedia entry on Asher Benjamin has recently been updated and is a wonderful resource.
No comments:

A Rumford Roaster is a combined stove and oven, built out of brick with iron inserts. 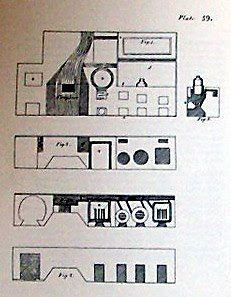 It was invented in about 1800 by Count Rumford (born American Benjamin Thompson in Woburn MA, 1753). Rumford worked for many years in Bavaria (where he was named "Count of the Holy Roman Empire" and thus picked up his trade name) and his design was most likely inspired by the German masonry stoves he saw there. German immigrants to the United States also built masonry stove here - you can see one in the German exhibit of the Frontier Culture Museum, in Staunton, VA.

Recently I was at Lorenzo (built in 1807), an estate on the end of Lake Cazenovia. The estate is a NY Historic Site, and the house has what I think is a Rumford Roaster in its kitchen. The owner of Lorenzo, John Lincklaen, was an agent for the Holland Land Company, and traveled back and forth to the Continent on business. Count Rumford had lived in England and France - where he was well known as a scientist and inventor - and his stoves, fireplaces and roasters were well received in England. So perhaps Lincklaen had seen one in his travels, and brought the idea back home to Lorenzo.

But the only other Rumford Roaster I have seen is in Lynnfield, Massachusetts (it looks just like this picture). The Lorenzo kitchen fireplace has the same lower holes for pots and flues, but I'm not sure the roaster on the side is there.

This got me thinking - why aren't there more Rumford stoves like this? Rumford fireplaces were widely built from the late 1790's until 1840, when cast-iron stoves became available. The fireplaces of many homes were retrofitted with the new Rumford shape because it threw heat and drafted so much better than the earlier fireboxes. So why didn't the Roaster enjoy similar success? Perhaps because it wasn't just a matter of an easy retrofit, but would have entailed a reconstruction of the kitchen fireplace?

Rumford's work was published in the States in 1804. In 1811, Asher Benjamin, author of one of the most popular pattern books of its time, devoted 2 plates to a description of the Roaster in his Builder's Companion, so people had to be aware of the concept. Even though the cast iron fittings (the round object in the etching) for the roaster were not cheap, the masonry stove - with holes to set pots in, fire boxes below, and a flue connecting them to the rear (the rectangles on the right side in the illustration) - would have been pretty easy to construct. But I have read of only a few Rumford stoves, and they're in grand houses: Gore Place in Waltham, MA, the Rundlet-May House in Portsmouth, NH. In all the years I've been working on old houses, I've only come across two. Are there more?

Maybe they are hidden in plain sight, like the one at Lorenzo - there, but unrecognized. Please, let me know if you see one!

Note: Both Gore Place and the Rundlet-May House are now museums open to the public in season.