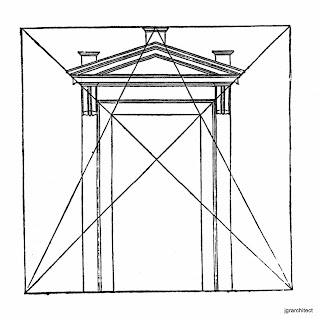 Sebastiano Serlio writes, ".... if the architect wants to build a temple door which is proportional to the place, he should take the width of the central body of the temple, that is the floor space - or between the walls if it is small, and between the pillars if it has transepts. From this width he should draw the same height which will make a perfect square.

... He should draw two diagonal lines and then the two other lines from the bottom corners to the top [center.] The "lines will form the opening of the door, and they will also enable the ornaments to be carved, as is shown... If 3 doors... were to be built in the face of a temple, the same proportions could be used in the smaller sides." *

We use this word: "line".  Usually we add helpful adjectives.

Metaphoric lines: "toe the line", "step over the line", life line; or bus and subway lines. 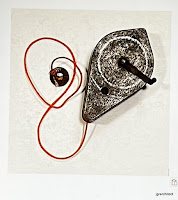 The line shown here can be either. a chalk line that can be rewound into the case, or a plumb line by hanging the line on a peg and using the case as the plumb bob.

We check that a foundation, a frame is true with matching diagonal lines.

There is also 'straight line', an oxymoron in geometry.

Serlio's definition is geometric; a line is "a straight and continuous representation from one point to another, having length without width."  Here is his diagram shown above, rotated and then all 4 diagrams overlaid to make one 'star'. 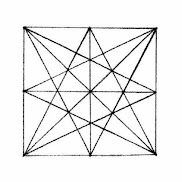 He ends Book I: On Geometry, " However, honest reader, although the things resulting from the various intersections of lines is infinite, to avoid being long-winded I shall come to an end."

Do we, in 2022, know what these words, the various intersections of lines mean? What results from them?

The easiest answer is the lines can divide a rectangle or trapezoid in half, vertically or horizontally, or in 3, 4, 5, 6 (etc.) equal parts.

Any 2 points can establish a line, so lines can create simple or complex patterns.

Here is one of Serlio's designs that begins with a square and its diagonals. Every dimension on the plan comes from that initial diagram. 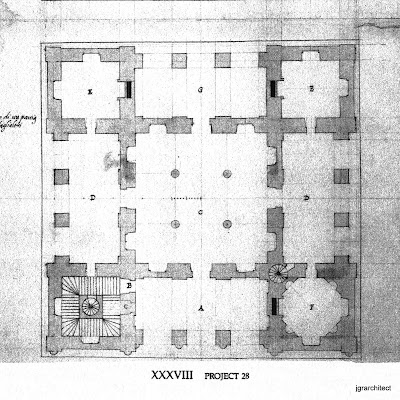 Serlio drew in the lines for his readers.They were not laid out first. The lines come from the geometry. The placement of columns, walls, openings come from the "various intersections of lines".

He also gives dimensions: those little hatch marks in the center. 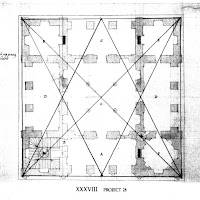 All of this can be easily laid out with Lines. The diagonals neatly cross the corners of the structure and the 4 columns in the central room.
The Lines Serlio used (shown above) to locate the door can also be laid out here. They cross at the center of the walls. 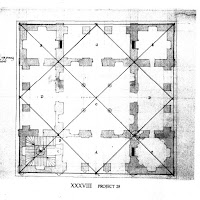 Serlio drew the lines that show the widths of walls, openings, and columns. How did he knows where those lines should be?  I followed his lead.

His design is a square: I drew squares. I located the center of each side of the plan and added the Lines from center point to center point. This divided the plan into 4 smaller squares. Now there were 4 points of intersection, plus the one in the center. 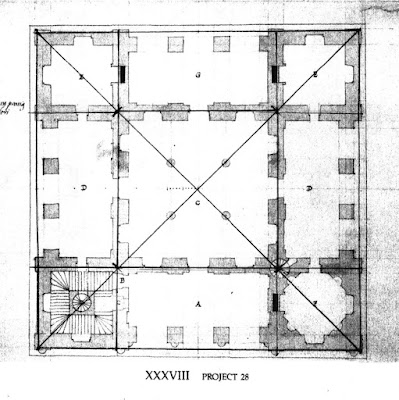 These points allowed more Lines to be added.

The Lines laid out the wall locations. They are at the back of the niches and the fireplaces. They told the mason where to begin his work. He could add the decorative niches, pilasters and mantles in front of the structure. The fireplace flues would line up.

Don't miss the wonderful details: the circular stair - lower left - is at an intersection. The main stair fits neatly into the lower left square, the octagon room in the lower right. 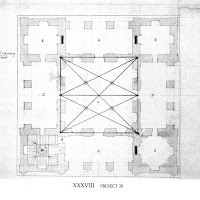 The Lines  - the diagonals that Serlio used in his drawing for locating the door  - locate the columns. They are on the 'third points'  in the space: dividing the center hall into 9 squares.

This is  a simplified version of the star I drew above. It is the 'Rule of Thirds' that we use when we compose images on our cell phones, that artists consider when they compose a painting. 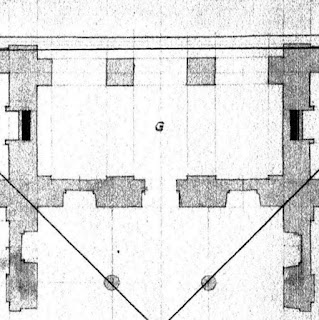 Each dimension comes directly from the first geometry, the square and its diagonals. 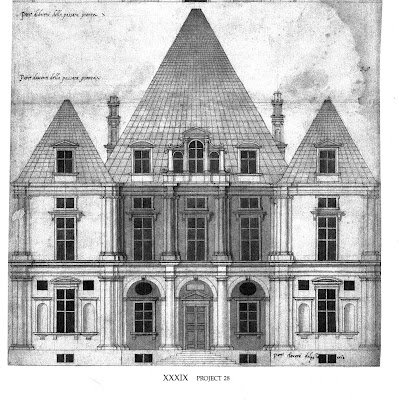 That simple layout creates the structure of the villa. Visually the walls became a backdrop for columns, arches, niches, friezes, lintels, dormers, balconies. However it is the geometry which holds all those pieces together.

Note that those square columns, here on the front of the house, have round pilasters added to their front sides, with doubled pilasters on the corners. And don't miss the chimneys!

* Sebastiano Serlio, Book I: On Geometry, See my bibliography: https://www.jgrarchitect.com/2019/06/bibliography-includiung-websites.html