"Before the Big House"

That was the title of the talk I gave for the Bennington Historical Society at the Bennington Museum  on July 16th.
The "Big House" is the Park-McCullough mansion, built in 1864. It is set on a hill: 50 ft tall, with 3 stories and an observatory, a bellevedere that looks over the countryside. The House, when built, was about 20 ft taller than anything else in North Bennington, except the church steeple. It had hot and cold running water, a furnace, and gas lighting.

Really, however, the talk was about North Bennington in 1856, 4 years after the 1852 flood that destroyed the center of the village. A title about that didn't make much sense as hardly anyone remembers that flood today or knows the 1856 map of the village. I wanted to show the resilience of the townspeople as shown by the reconstruction of the mills and houses within 4 years of the flood. And I wanted to present the village - 60 houses, 8 mills - just before the Industrial Revolution takes off.

The Society doesn't usually have summer lectures, so we were experimenting. Would anyone come?

I had power point presentation of 70 slides, a hand out and some books to share. I planned to get everyone to measure their own 'cubit'. If we got 10 people, we would have a discussion, 20 (because the museum has a/c and it was hot!) would be a seminar. With 30 I would give a  lecture.We put out 40 chairs since no one sits in the front row.

50 people came, sat in the front row, stayed to the end, asked questions and looked at the books, took the handout - a copy of the 1856 map - home. None were left behind.

People tell me it was a good talk. In the next year I hope for some comments about what people see now when they are in North Bennington. For me, that would mean success.

How I work with clients #3 of 5 Existing Conditions

This list gives you, the owner, and me a overview of your house. It helps us set priorities and gives us a record 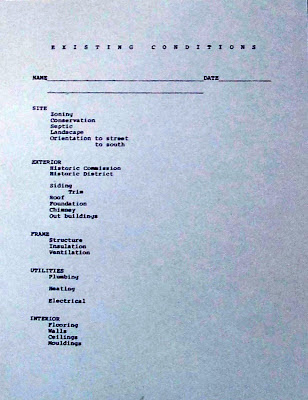 
You want a new wing that will open out to your back yard. You also want another bedroom and bath,

Your septic system's placement will determine where you can add on.You will not want large trucks driving over it during construction.
If the field should be expanded, now is the time to consider that.
If you have the opportunity to connect to a town system, now may be the time. That work and expense should be included in the job.

Despite this list when we renovate existing houses we find things. I  remember the excavation of unknown septic systems at two different jobs. Both were disconnected - we checked to be sure! - but one needed to pumped. 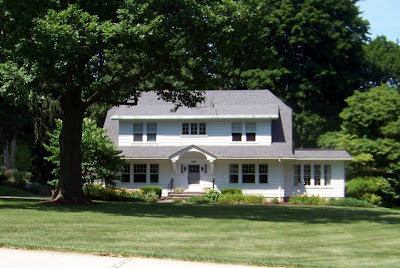