How Long Is Your Cubit?

I've found another reason for Asher Benjamin's geometry lessons and the proportion diagrams on his plates.

It turns out that in 1800, the various and different measuring systems used in the western world were quite divergent. A cubit seems to have been standard measured: from your outstretched middle finger to your elbow (about 18"). But a yard might be from your finger to your nose, (36") or to your near or opposite shoulder, (30", and 42" respectively).

I think this is great, since I have been measuring with body dimensions for years - using my own body to discretely measure an interesting space without drawing attention to myself by whipping out a tape measure, or helping a client to tell me how big is 'big' by stretching out both arms and saying, "This big?"

In 1793, Napoleon tried to create a standard, a metric system, with some success. And in 1824, the English made a standard yard, also with some success. The process took a good 50 years to take hold, and today we still have lots of regional variations, not to speak of the gulf between inches and centimeters.

Here in the States people measured cloth, grain, lumber using the system they had learned in the 'old country'. A Pennsylvania carpenter who repairs 18th century houses has told me he can tell a house built by a German from one built by a Quaker by its dimensioning.
No comments: 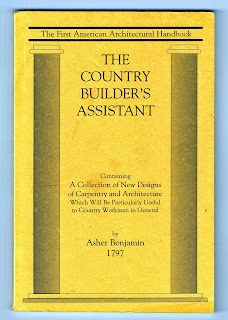 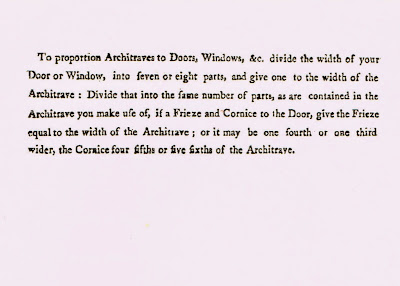 The Country Builder's Assistant, by Asher Benjamin, 1797,  shown above,  is a reprint by Applewood Books, Bedford, Massachusetts, 1992.  The originals, (worn. well used and well loved!) are often available in rare book libraries.
No comments: