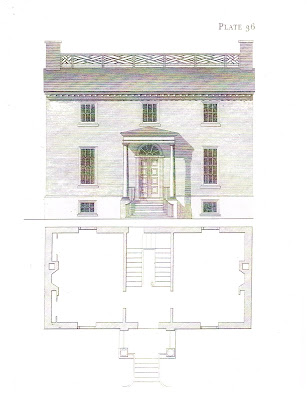 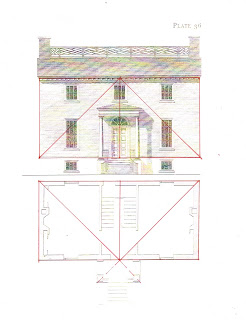 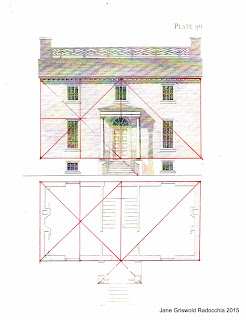 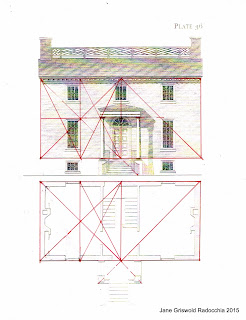 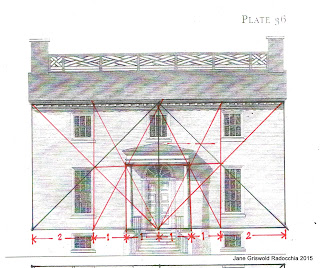 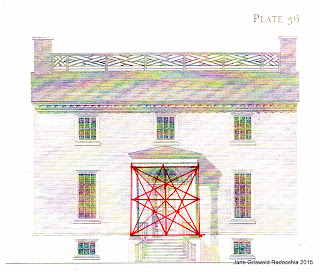 Perhaps I should let the photographs speak for themselves. 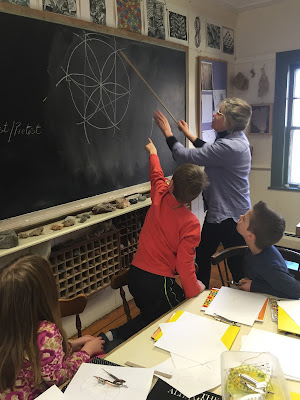 The picture is from our first class.

The teacher, Jude, drew the circle and swung the arcs you see on the blackboard when  he realized we needed to watch the circle and its daisy wheel come into being. He knew how to help each student as they learned to twirl a compass - not easy for some children. Jude was essential to our success. .

When we looked for the triangles in the circle they were with me, as you can see.

I introduced the wall tiles and carvings from the Alhambra at the end of class. Everyone knew immediately why I had brought the pictures; they was fascinated.
I showed them how carefully the craftsmen had made every joint as perfect as possible. They understood.
Jude taped them to the blackboard. He invited me to come to school earlier for the second day so that we could do more 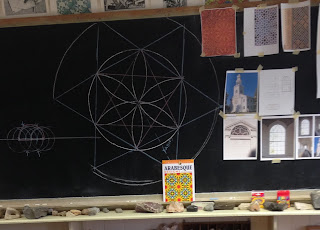 The next day we expanded the circle . That was easy. Extending the segments of the hexagon, making a new bigger star was an obvious step. 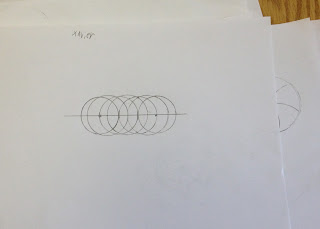 So we tackled the 'rolling circles' of the church windows.   Much harder... not making the circles but finding the muntin pattern within the jumble.

The older children were the most successful. 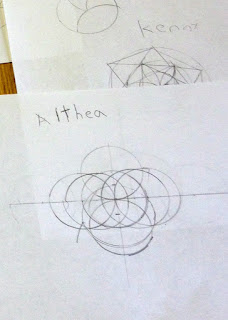 Some children explored on their own and showed me their work. 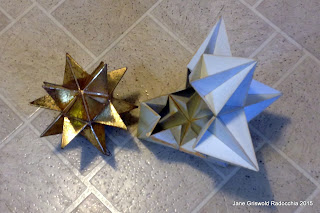 I brought in 2 star dodecahedrons* for them to hold -  a great hit.


I had fun, learned a lot. The kids practiced and understood.
And they were patient: The compasses I brought were accurate but delicate and hard to adjust. The students shared and adapted. I will find them better tools.


* That may not be the proper name  for a dodecahedron studded with pyramids - I haven't found a good reference. Please advise if you know. 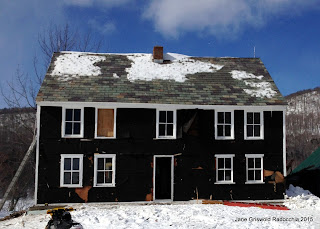 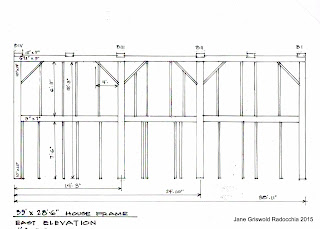 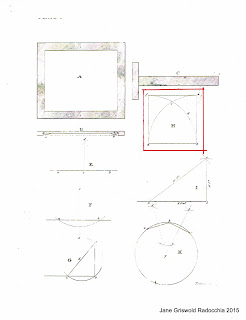 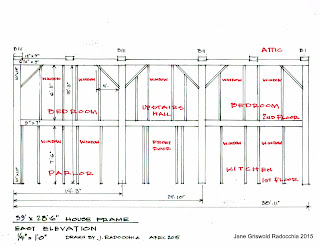 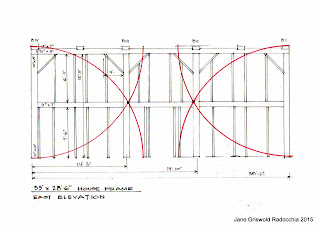 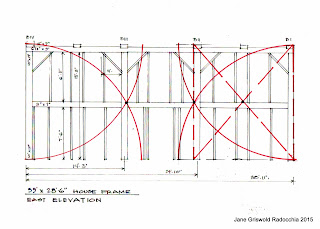 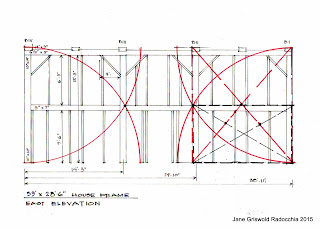 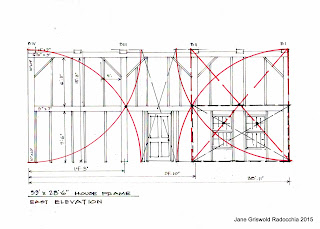 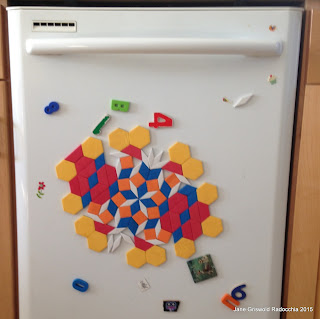 How to teach geometry.

NOT the high school class of logic and proofs that comes after algebra.
Instead the real understanding and use of form, proportion, rhythm. Or: how a circle, a square, tells itself how to divide or grow.
Sounds mythical, magical, doesn't it? No wonder people call it 'sacred geometry'.

But it's just points, lines, circles, rectangles, triangles; shapes that are part of nature, part of the earth, something our ancestors understood and used for thousands of years,

Where do I begin?

My grandchildren (7 and 9) are working with tiles and making patterns - tessellations - at their ungraded school.

Here is yesterday's tessellation pattern on their dishwasher. Another pattern, mostly in green, is on the refrigerator. I've just ordered 200 more tiles because sharing is difficult when you're working out a pattern!

I asked their teacher if I could show the class how to use a compass and how to divide a circle into its 6 parts, how the pattern expands.
I sketched some diagrams on a paper scrap using a plastic cup as my compass. He liked the circles. He liked introducing the students to the words 'radius' and 'circumference', to Islamic art through the tiles of the Alhambra.
I am invited to share circle geometry in math class next week, two 30 minute sessions.

When I told my grandchildren that I would be coming, the younger asked me what that word 'geometry' meant. The older told me that shape I called a diamond was really a rhomboid.

Clearly this will be interesting.
Whatever lesson plan I take into class may have to be discarded. So my goals are simple: practice drawing a circle with a compass; see what happens. 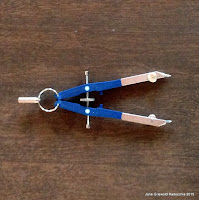 I'll start with: why a point and a lead, how to set a radius, how to turn the compass by its knob. 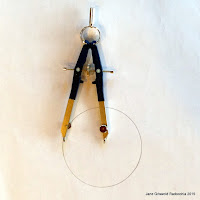 When we master that we can make some circles and then divide the circumference in parts. I want them to see that no matter where they start dividing the circle its outside edge will be 6 equal pieces. 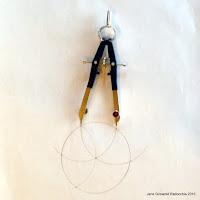 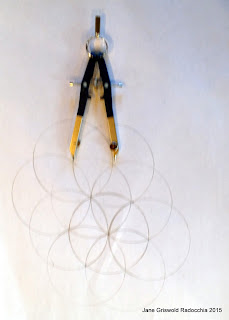 Then we can do daisy wheels - that will please everyone.


I hope we are making patterns in less than 30  minutes. 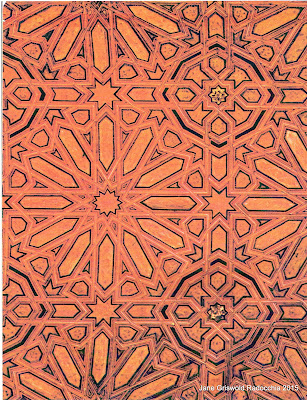 To help them see how a pattern can grow I will have this pattern  along with others and a coloring book based on the Alhambra designs.

This is the painted and carved wood ceiling of the Hall of the Blessing in the Alhambra. It uses the circle divided into 8 parts, not 6 as I will be teaching. I am prepared for a simple discussion and illustration about dividing a circle into 4 parts instead of 6! 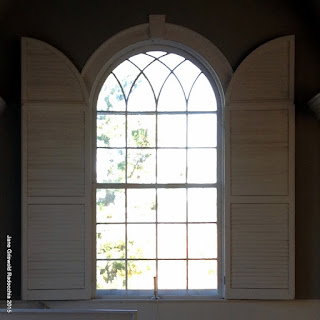 If every student has enough manual dexterity (!) in the second sessions we may be able to see how the curved muntins for the arched window at the Old First Church in Bennington come from  a circle.

I think I will have on hand my copy of Norton Jestor's The Dot and the Line, a romance in lower mathematics.
2 comments: