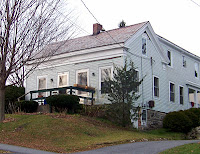 #31 – H. Hall House’s shape is similar to, but more generous than the housing on Sage St. A wide frieze board has been added at the eaves.
This house and its neighbors were a small community around the Baptist Church which sat here at the intersection of West and Park Street.
Built between 1830 and 1850 they are the beginning of the new style, Greek Revival.

#32 – W.J.Toombs House. The gable of this Greek Revival house

faces the street. Its entrance faces down the hill, to the side in the center of the house.

33 – Known as “the Lodge” because it served as a guest house for the Parks and McCulloughs whose 1864 mansion is across the street. Now a school with many wings and alterations, the original house, built by Martin B. Scott, is in the middle. 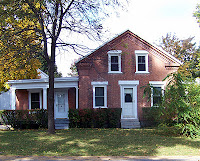 # 34 – Baptist Parsonage, 1847, brick, Greek Revival. The door and window casing are similar to the Watson House on Prospect St. The pattern at the eaves creates a frieze in brick. The frieze boards in the neighboring houses show how much easier it was to do in wood. The left wing is later. The original house was quite small.

# 35 – D. O’Brien’s house in 1856, it was built c. 1830 by Nathaniel Hall, brother to Hiland Hall, whose house was down Park Street. This house had a serious fire. The left and rear wings are 20th century. The shape of this house, gable end to the street, side wing with porch becomes the preferred shape in the village.

Take a walk through the Historic Park-McCullough House grounds. Visit the ‘Big House’ and see what Trenor and Laura Hall Park built in 1864 in their village with money from the California gold rush.

The Hall – Park - McCullough family was a generous contributor to the betterment of the village. Hiland Hall and John McCullough served as governors of Vermont.

The Hiland Hall farmhouse is beyond the Big House.

Church St was not here in 1856. This was Hall and Colvin farm land.

The North Bennington Graded School was built in with the help of Hiland Hall and Trenor Park. 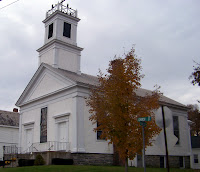 # 36 - The Baptist Church, built in 1845, sat on the corner, looking over the town. When Trenor Park wished to build his mansion here, in 1864, he laid out Church Street from here to Bank Street and moved the existing building a block down, out of the way. It has still retained its view out over the village.