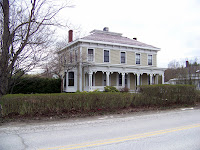 The Dyer House is no longer here.

Cross the railroad tracks, and walk up to # 50, the William Hawks House and carriage barn, built in 1855. They are not on the 1856 map. Perhaps they were not finished when the data for the map was collected.
The house has an 'old-fashioned' center entrance, room on each side, shape. Over that is the Italianate 'new-fashioned' hip roof, double front door, porch, bay window, and trim!
The Hawks mill was on the south west corner of Water and West Streets.

Return to the railroad station and cross on Depot St. which wasn't here,
to Houghton Street.

There was a depot, a freight and engine house, but not these. This station was built in 1876. Here three railroads met: the Troy and Boston, the Western Vermont and the Bennington Branch, all with different owners and differing track specifications.

Houghton St was named after the family whose elaborate Queen Anne Victorian house was here. For an extra excursion turn left on Houghton Street, continue across the tracks to Lake Paran Park on the right. Lake Paran was created by the railroad bridge over Paran Creek in the 1840’s. 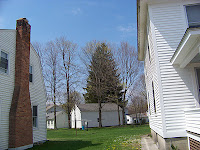 Between the houses the Robinson barn - #51 - is visible. In 1856 this land was fields, farm yard, and kitchen garden.

# 52 may be the M.B. Murch house. The D. Corkins house has been replaced by St. John the Baptist Catholic Church. picture to come

# 54 –Warren Dutcher House. Greek Revival c. 1840, with added porch. Mr. Dutcher’s house in Bennington had burned in 1849. He invented a improved temple for mechanized looms. By 1858 he had relocated his factory – which had been on Paran Creek - to Hopewell, MA.

#46a - Barn for Hawkes (Eddington) House picture to come
This side was the working side of the house: the location of the stable, dairy, kitchen garden, and barn yard. The front door was for company.

These are the main buildings which were in N. Bennington in 1856, with the exception of 11 houses, a school and an Academy (now gone), and 3 factories, all on Water Street. (Those buildings which remain will be added as a 'drive-by' tour.) Barns, shed, outhouses, and other secondary structures were not recorded.
I found it fascinating to understand physically, by walking down the streets of the village, how it would have felt to live here, how small a village it was. I hope you do too.
I welcome your comments and corrections. The internet makes improvements simple. Thank you for visiting.