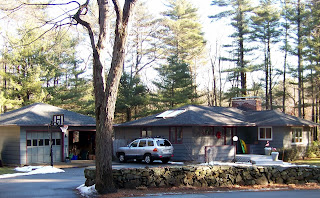 The highly respected instructor at the local vo-tec built this house for his family in the 1950's. Compact, with built-in furniture which dictated the use of every room, it felt much like the Frank Lloyd Wright Usonian houses I had visited.
His children were happy to inherit the house but wanted more room, un-dedicated, larger spaces. They had already added a garage and a stone wall to separate the house from the back road which had become a short cut from one state route to another.
They needed the front door about where it was, they wanted light but hoped to preserve their privacy. And they liked the house. The wing needed to compliment the original vision.
The original house is to the right, past the flamingos. The new wing is in the middle with skylights, next to the garage to the left. The overhang matches the existing and protects the entry deck and the walkway leading to the driveway. The half wall and the light post with its round globe at the edge of the deck help lead the eye to the entrance which was in danger of disappearing under the shadow of the roof. The flamingos and flower pots help too.