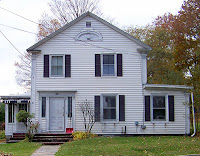 #44 – Sam C. Loomis House, Federal, c. 1830. This house is hidden by its siding – its graceful front entrance, corner pilasters, and fanlight in the gable still peek through. It is smaller, only 2 windows wide, less imposing than its neighbors down the street (#2, 25, 26). 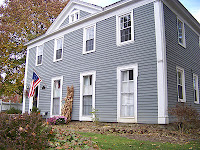 #45 -Hawkes House, c. 1830, and updated many times. Breaks in the trim indicate a porch location, window changes, and various expansions. Mr.Loomis ( #43) and Mr. Hawkes owned the market in the square (#3). 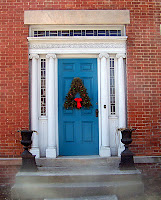 #26 - Hiland Knapp House, c. 1825. The curving bands – guilloche – at the eaves and at the entrance, slender ionic columns, a subtle brick pattern, dressed marble lintels and sills are graceful and sophisticated. The style, Federal, was inspired by the Adams Brothers, popular English architects at the time. 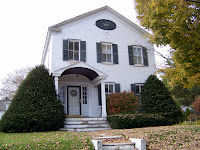 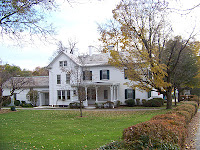 #2 –The Welling House end the Green Tour. Its Italianate side porch to the north once circled the house.