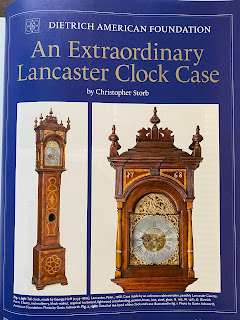 The Dietrick American Foundation published an article about a Lancaster clock case, researched and written by Christopher Storb, in July 2022.* It was forwarded to me by Craig Farrow, Cabinet Maker.**  He knew I would be interested.

The Foundation wrote that it "intended [such articles] as a type of crowd sourcing, where responses and information shared by readers can inform research."  I am happy  to respond, to try this way of sharing information, to see if it can be successful.

As my research on the use of geometry in construction - Practical Geometry - is not well known or understood, I have written this post as an introduction.

I will write to Christopher Storb when I publish this analysis. I look forward to his reply and the information from others who have responded. 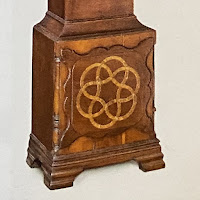 The article is fascinating with clear images and explanations.

I especially liked the the medallion at the base of the clock case and was delighted with the cabinet maker's tilt of the knot. I appreciated Christopher Storb's clear analysis of the geometry of the knot as intertwined hourglasses rotated to "create the illusion that the design is in motion, mirroring the actual rotation of the hands of the clock dial above." 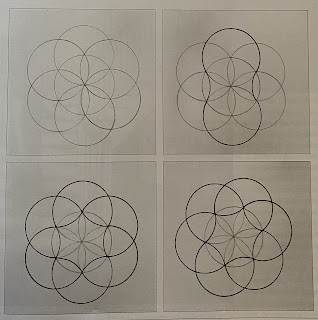 Here is the geometry as drawn by Christopher Storb: the daisy wheel and its 6 outer circles, the lines of the parts of the geometry used on the clock outlined for clarity and then the pattern rotated to fit the diagonal, upper left to lower right.

I saw that the geometry governed the design of the whole lower panel, not just the knot.

I decided to map it. 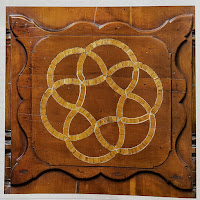 The photograph in the article is not quite square. The image of the knot and its panel is slightly skewed; the diagrams drawn over the image are not quite true. Therefore I have drawn the geometry separately. 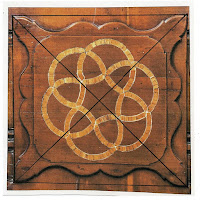 I began with the panel which is the front of the base. It is a square.

I added the diagonals. 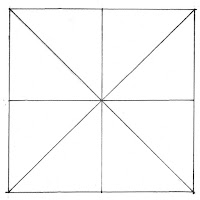 Then I divided the sides in half, vertically and horizontally. ***

Here is the geometry as laid out by compass and straight edge.

The cabinet maker did not need to use numbers. Each line came from the basic shape, that first square. 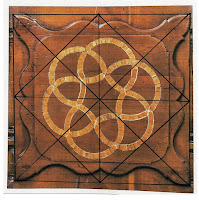 The horizontal and vertical lines bisect the scalloped edge.

Every line crosses the others in the center. 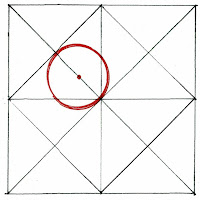 From those lines several others are easy to add. The sides of the smaller rotated square run from center point to center point.

A small circle - with a diameter the distance from the center of the design to the inner rotated square - can be added. 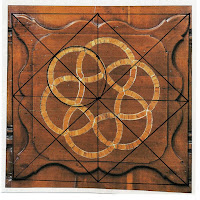 That small circle is the first circle of the knot, located by the geometry of the face  - its diameter is determined by the squares.

The rest of the knot can be laid out with a compass as shown in Christopher Storb's diagrams. 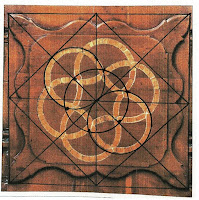 The cabinet maker did not need to rotate his diagram. The knot began on the slope of the diagonal. 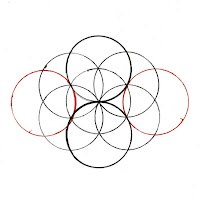 Here is the vertical hour glass image, in the center, as it is in the upper right of Christopher Storb's diagrams.  6 more circles can be added around the outer ring of the hour glass layout. I have only drawn 2.  Their arcs are the inner curves of the hour glass shape. 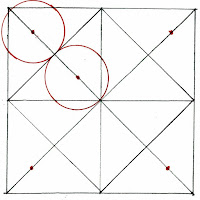 I have added the upper left circle in red, then the 3 other centers of the circles  - the corners of the square - as red points on the diagonals. 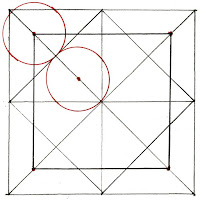 Here is the layout of all the squares of the design.

They are governed by the lines which begin with the exterior square of the clock case's base. 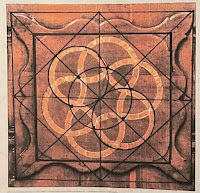 The square (as drawn here) of the shield confines the knot. It is static but the knot is fluid. 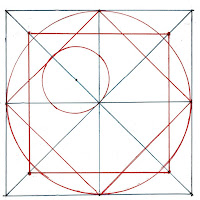 The shield's circle which surrounds the square, is also a perfect, stable shape. The knot implies movement and change while the circle is constant, never changing. The circle constrains the knot's curves just as the square does. 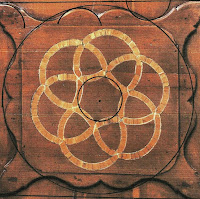 The diagrams are the forms for the design. They were the beginning. Then the cabinet maker played with the shapes.

His solution was to compliment the knot by curving the corners of the square with the circumference of the circle.  He loosened that circumference by adding the scallops and fins.

The  flourishes - the scallops and fins - are laid out by the arc of the radius of the inner circle of the knot, a smaller circle which comes from the width of the wood and pewter bands.

The shield  becomes not a constraint but a backdrop, a commentary. Both the square with its softened corners and the circle behind it with its horns and scallops present to the viewer that remarkable knot with its pewter ribbon.

What knowledge and skill this cabinet maker had! 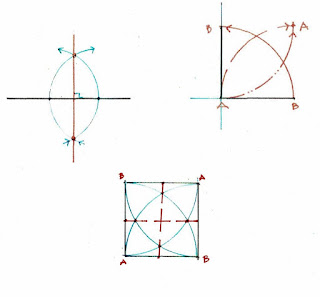 *** dividing a square in quarters using a compass:

This diagram was published in pattern books written to instruct apprentices. The square with its arcs has 2 points both horizontally and vertically. The lines of these points divide the square into quarters.