Lesson 7, How to layout a frame with Lines

A Line is a basic tool for layout and design.

Serlio, in 1520, used twine with a plumb bob as his Line. On  the frontispiece of his book, On Architecture, he drew his Line entangled in the metal scrolling. The end for tying is frayed.

Even through we now write 'line' without the capital L, we still use lines to keep our construction 'true' - straight, square, and plumb. 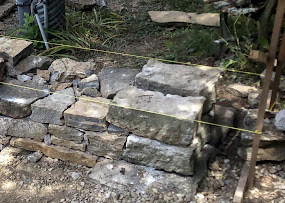 Patrick Kennedy, in Kentucky in 2020, used his line to keep his new stone wall straight. He tied his line to wood stakes. Rebar is also commonly used today. 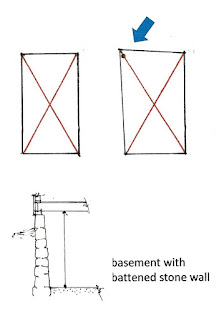 Modern examples of using lines to keep construction square and plumb:
Checking a foundation's diagonals will ensure its rectangle is true. A square frame is easier to erect than one which is crooked.

A rectangle will have 4 square - 90* - corners if its diagonals  are equal. Here the far rectangle is not true. The diagonal is too long. It  should meet the corner at the upper spot.

Plumb lines ensure that walls are true or plumb: straight up and down,

If an existing wall is not true the framer must know in order to compensate for the discrepancy. Here the plumb line with its  bob on the bottom shows that the foundation wall slopes. 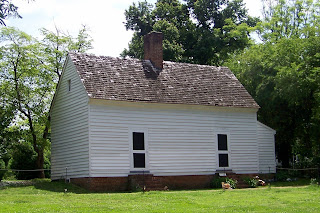 How lines were used historically in construction can be seen in the frames of buildings built for utility. No one was showing off - just getting the job done - using what was ordinary. 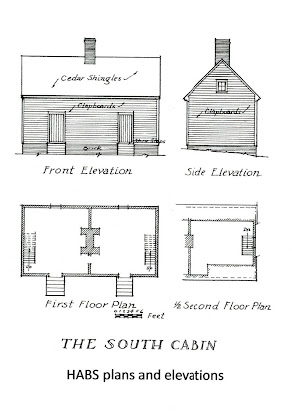 This is minimal housing. We are lucky it survived. 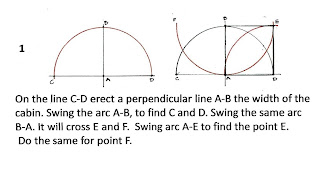 1)   A line - a length of twine - could have been used to layout the 2 square units.
Lesson 5 and Owen Biddle's Figure H show the steps. ,

The builder could have been laid out the foundation knowing only where to site the cabin and how big it would be. He didn't need drawings. He could set his foundation and lay the floor using only his Line and some pegs. 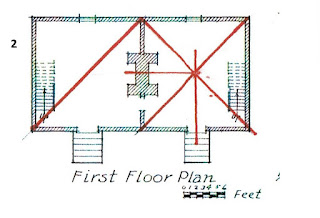 2 - The Lines measured the diagonals: if they matched the 2 squares were true. The diagonals also crossed at the center of each unit, locating the fireplaces, doors and windows. 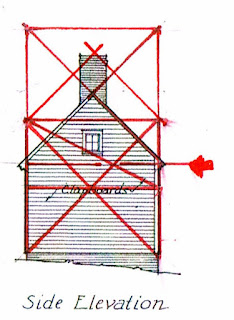 The cabin floor could have became the framing floor. The Lines necessary for framing could be marked with a chalked line.

Carpenters today build this way: they use the floor of whatever they are building as their framing floor. When the frame is ready it is lifted into place.

The square and its lines determine the wall height (red arrow). The 2nd floor is set at half the square. The roof begins as a square set above the wall. The roof pitch is the diagonals of the 2nd square. The chimney is 1-1/2 squares tall. 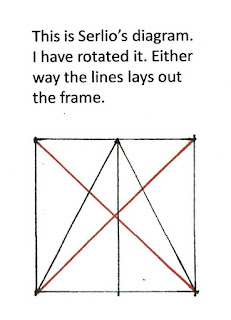 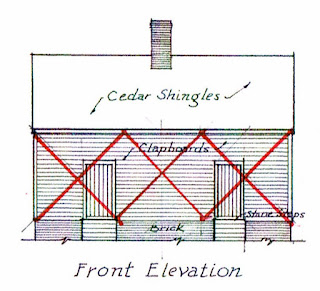 The front elevation is an after thought. The plan and end elevation have already determined all locations. 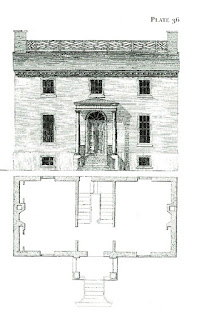 Carpenters use center lines to locate windows and door. They then frame on either side of the opening.

Masons, however, need to know where to end the row of bricks. The lines for brick or stone construction often end on the side of an opening.

Owen Biddle's simple town house is a good example. It has 2 rooms up and down, plus a basement and entrance porch.

This layout could be drawn on the first floor just as the cabin could have been. A drawing might have been necessary for the front entrance with its fan light.  I have seen such drawings on wood which - when no longer needed - became roof sheathing. 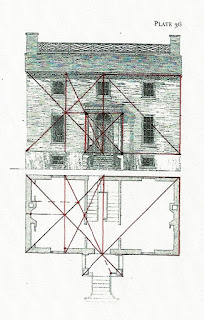 His floor plan uses the Lines to locate walls and the fireplaces.

The illustration was a guide for the 'carpenter assistant' so it is quite straightforward. It is the proportions that give the house presence.

Still, the house would be bare, spare as farmhouses are, without the details: the fanlight, the porch columns, the fretwork.

Other illustrations in his book use more complex geometries.

My introduction to the Tuckahoe Plantation cabin is here.\: https://www.jgrarchitect.com/2014/06/cabin-tuckahoe-plantation-goochland.html

When I teach Practical Geometry, we often lay out the Tuckahoe cabin with a line. The floor plan appears as we swing the arcs and mark the intersections.

Owen Biddle's town house is elegant, and very simple. A step by step analysis of the geometry is here: https://www.jgrarchitect.com/2015/11/owen-biddles-plan-and-elevation-for.html

These "lines" are so critical to understanding proper architectural design, layout and facilitation. They are too often overlooked today in modern construction and/or only a "machine/technology" is relied on to make them true..

Teaching now and having students watch and learn to build without a tape measure or "modern" measuring methods as the primary system is rewarding to see the old crafts being kept alive and still interest in by the next generations...

michellejoseph said...
This comment has been removed by a blog administrator.
September 26, 2020 at 12:22 AM