The participants at the hands-on sessions I taught on Practical Geometry  at the 2016 PTN Workshops, asked me to post the diagrams for the basic geometries they worked with.
Here is the first.

How to divide a square into thirds:

We used graph paper for the first geometry so everyone could see the lines develope into a pattern. Everyone could count the squares to be sure they were following directions. 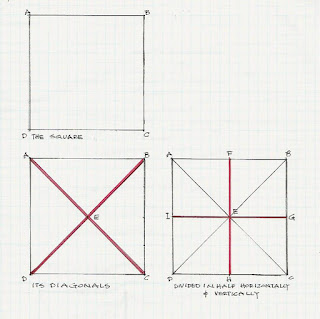 This is the basic pattern. The square can now be divided into 3, 4, or 5 (or more)  equal rectangles as needed. 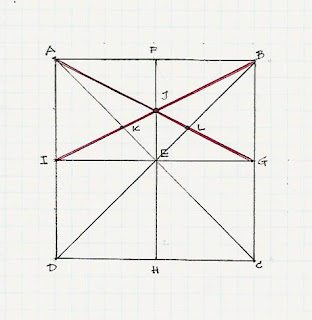 2. To divide the square into thirds:
Add a line from each corner to the middle of the opposite side. A to G and B to I.
These lines cross the original pattern.

K and L, if extended parallel to A-B, would define a rectangle that is 1/3 of the whole square.


A rule in geometry is that there must be 2 points to establish a line.
Below is a diagram of  how the diagonals from the corner of a square to the middle of the opposite side give 2 points for the lines which divide a square into three rectangles of equal size. 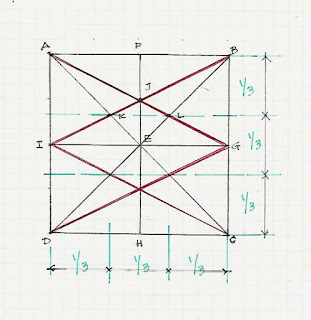 This division of the square into thirds is often found in pre-Industrial Revolution design.
I do not think framers drew out the whole diagram on a sheathing board or a framing floor. Rather because the diagram was common knowledge they just drew the parts they needed. 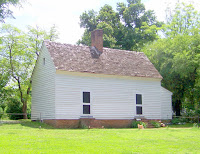 At the workshop I taught the application of this geometric pattern using the plans and elevations from a cabin at Tuckahoe  -   http://www.jgrarchitect.com/2014/06/cabin-tuckahoe-plantation-goochland.html.

The end wall of the cabin is  2/3 of a square. The roof  begins on the 2/3 line. Its pitch follows the diagonals of the upper square. the windows, doors and fireplace are centered on the square. That's all. 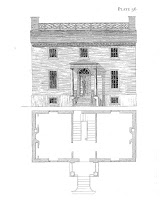 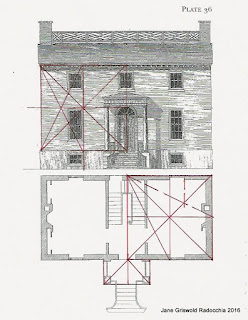 I then showed the group how Owen Biddle used the same geometry to tell a mason where windows and doors were to be placed.
The  elevation and floor plan are both composed of 2 squares. On both the window placement is one side of the center line. The  diagonals from corner to center call out the window width ( on the elevation and the interior partition on the floor plan.
In the floor plan I have used a dashed line to note the lines dictating the window width.
http://www.jgrarchitect.com/2015/11/owen-biddles-plan-and-elevation-for.html 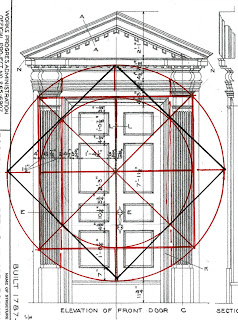 I did not include diagrams showing how master joiners laid out squares bounded by circles, bounded by squares to set out the dimensions and relationships  between parts of doors and architraves for Georgian meeting houses.
Shown here is how the surround of the main door for Rockingham Meeting House, Rockingham, VT, may have been laid out.


The carpenters and masons called these geometries 'lines' They would have have been explained verbally as a master taught an apprentice.  Sebastiano Serlio and James Gibbs both refer to 'lines' - see my post  http://www.jgrarchitect.com/2017/04/serlio-writes-about-practical-geometry.html