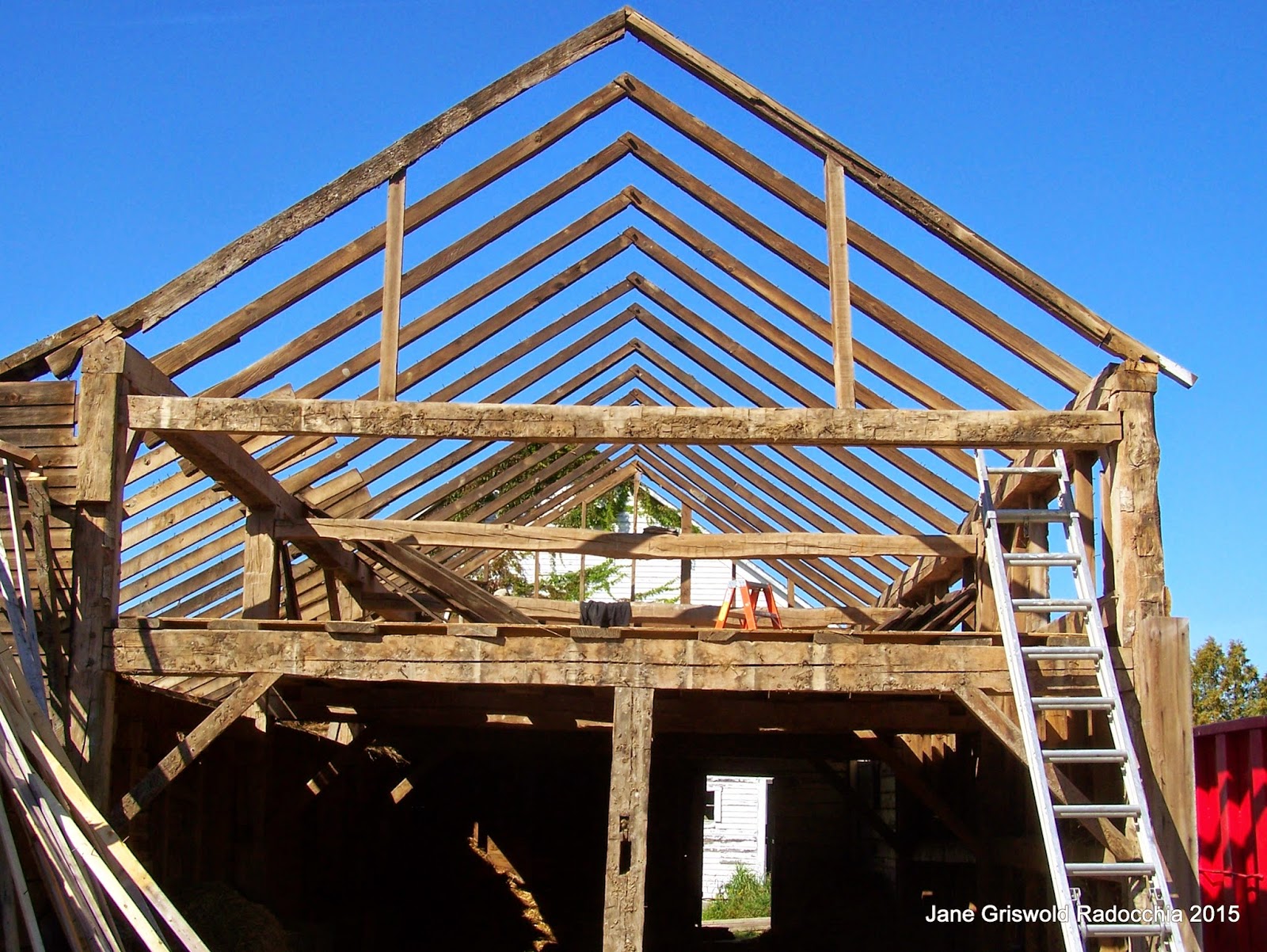 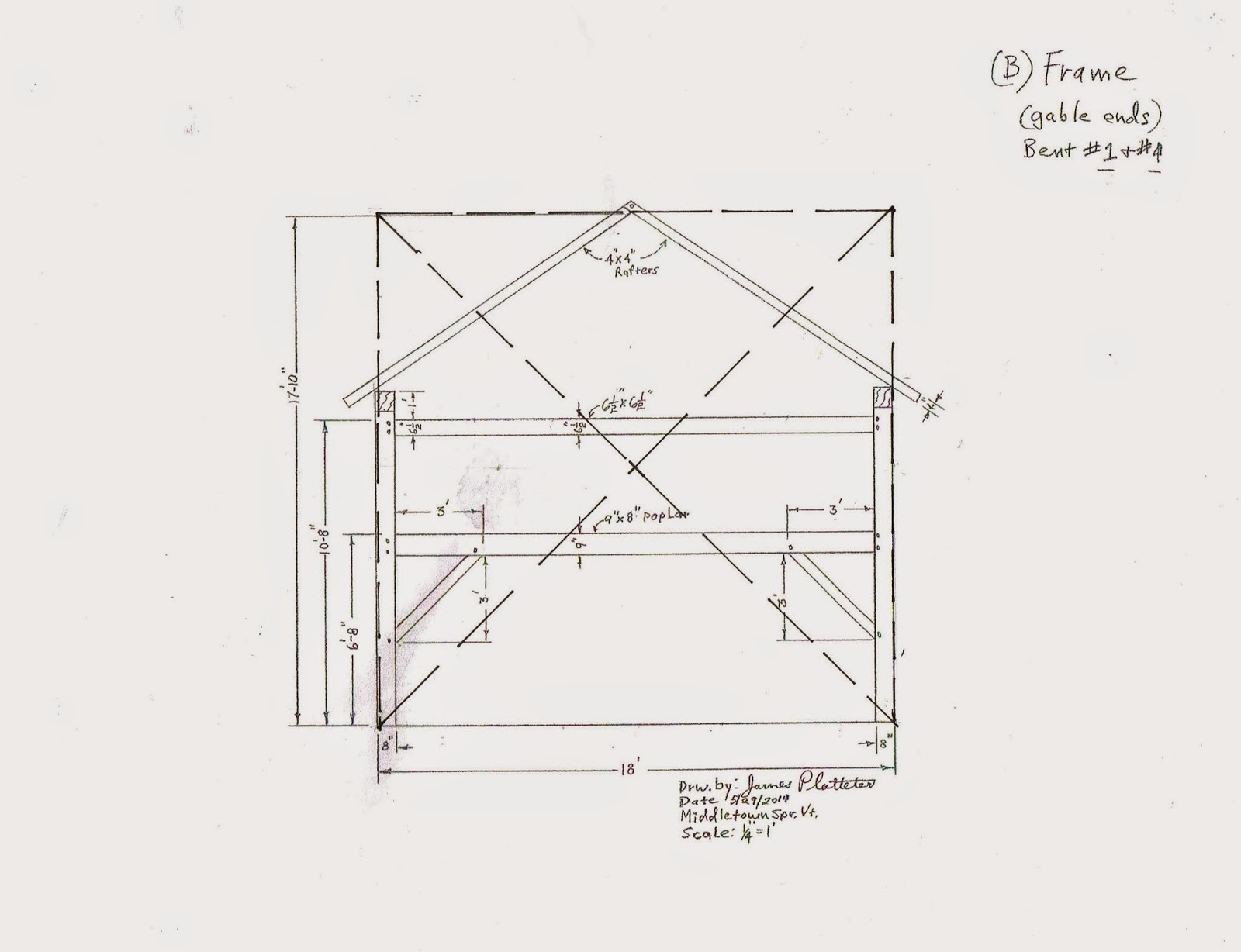 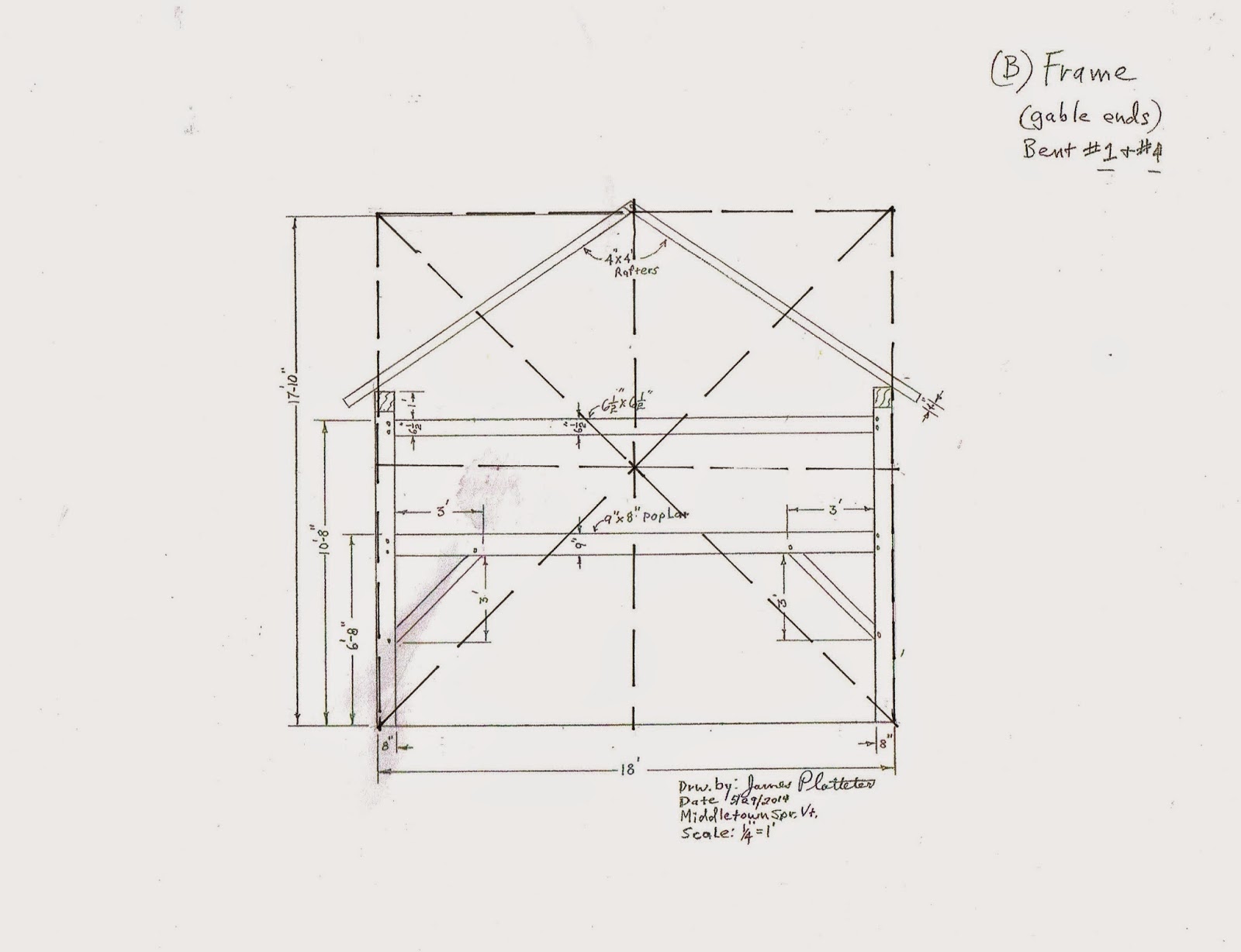 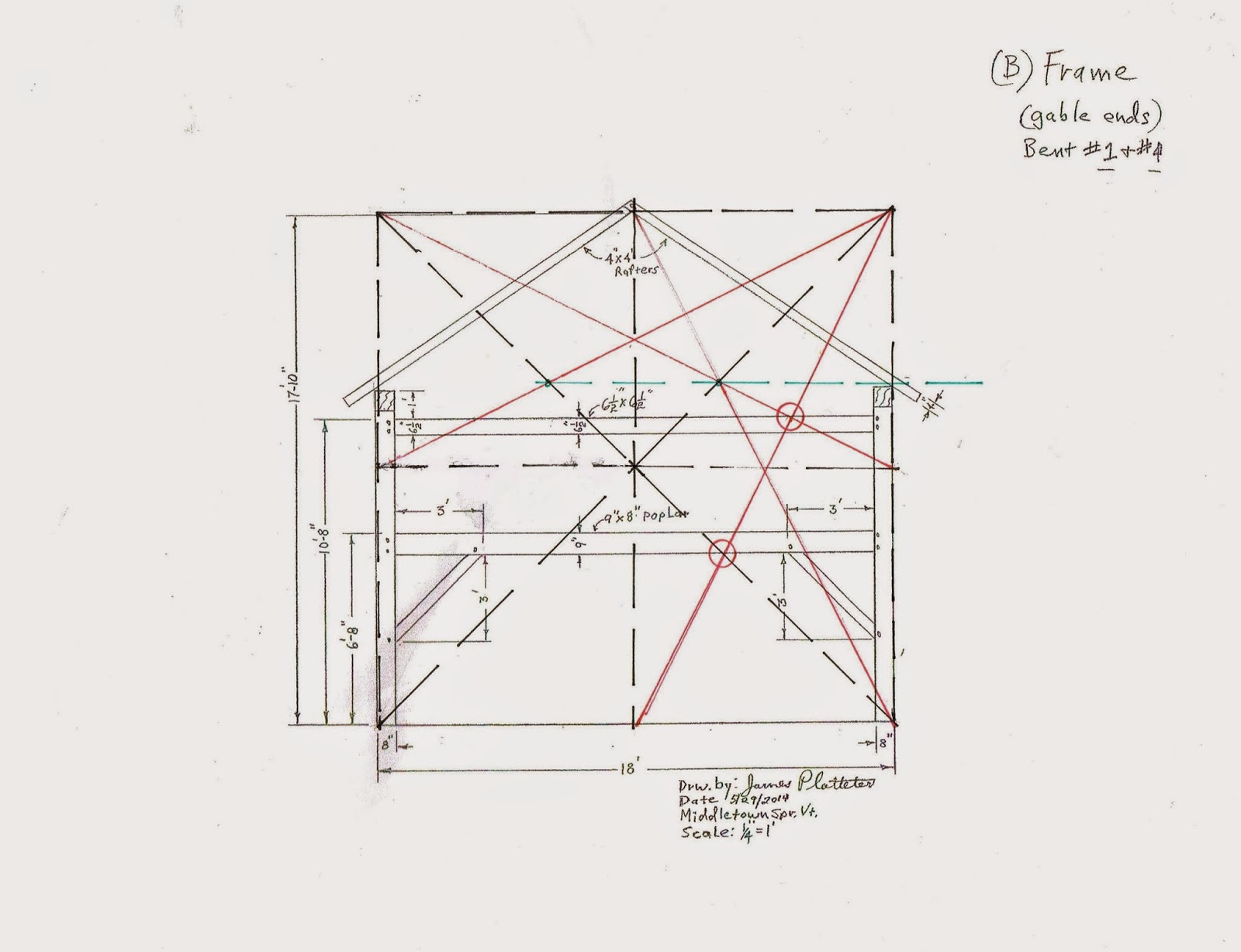 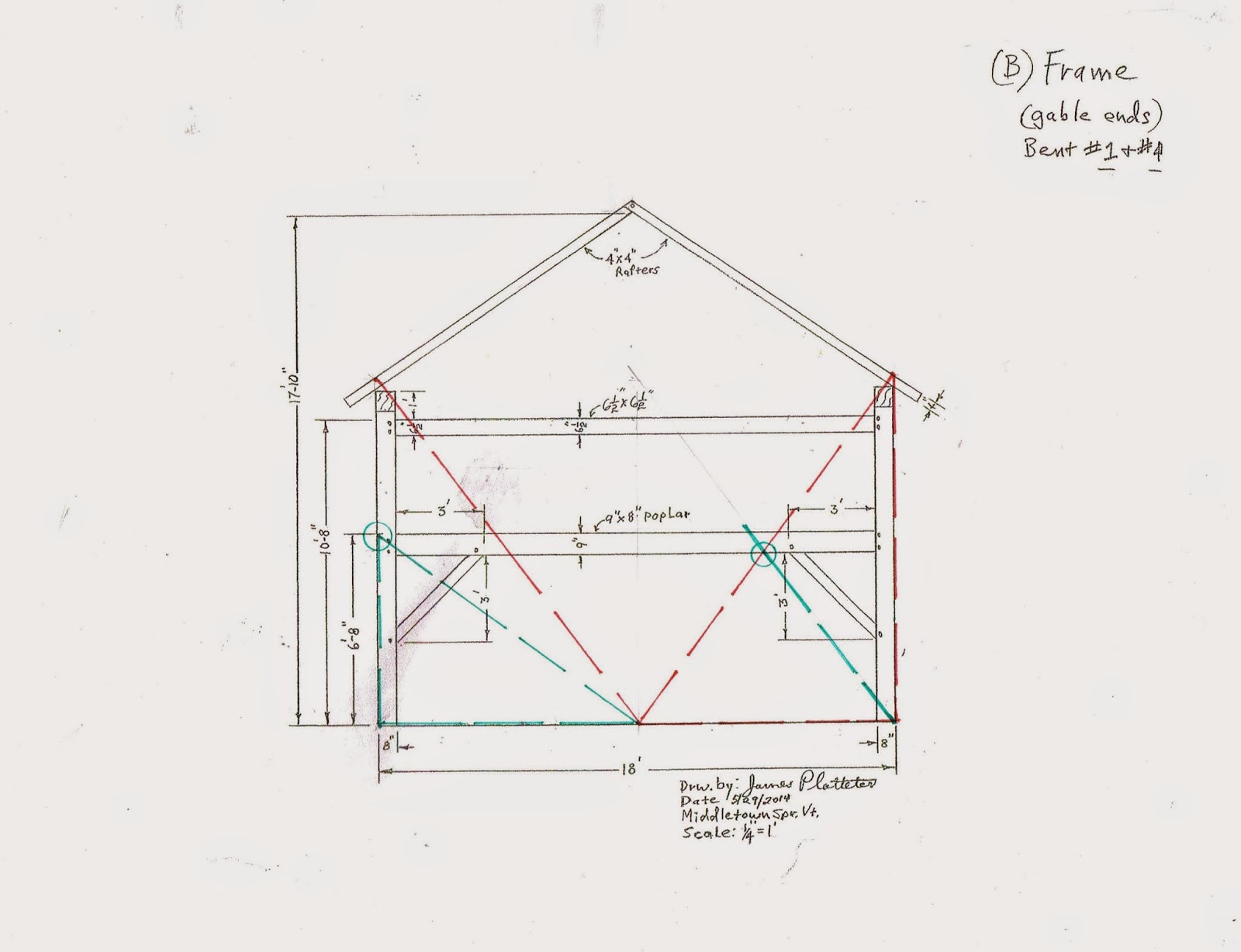 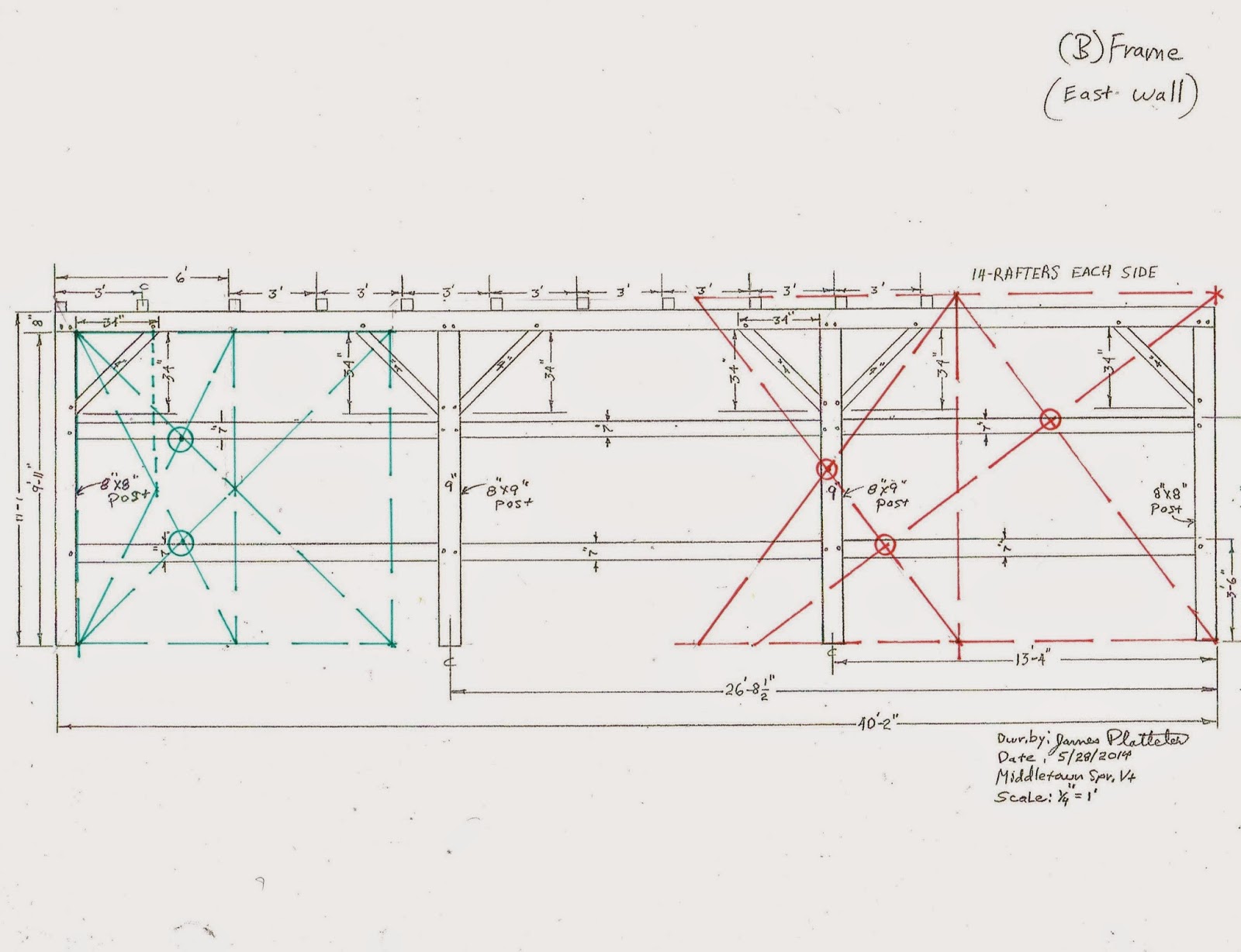 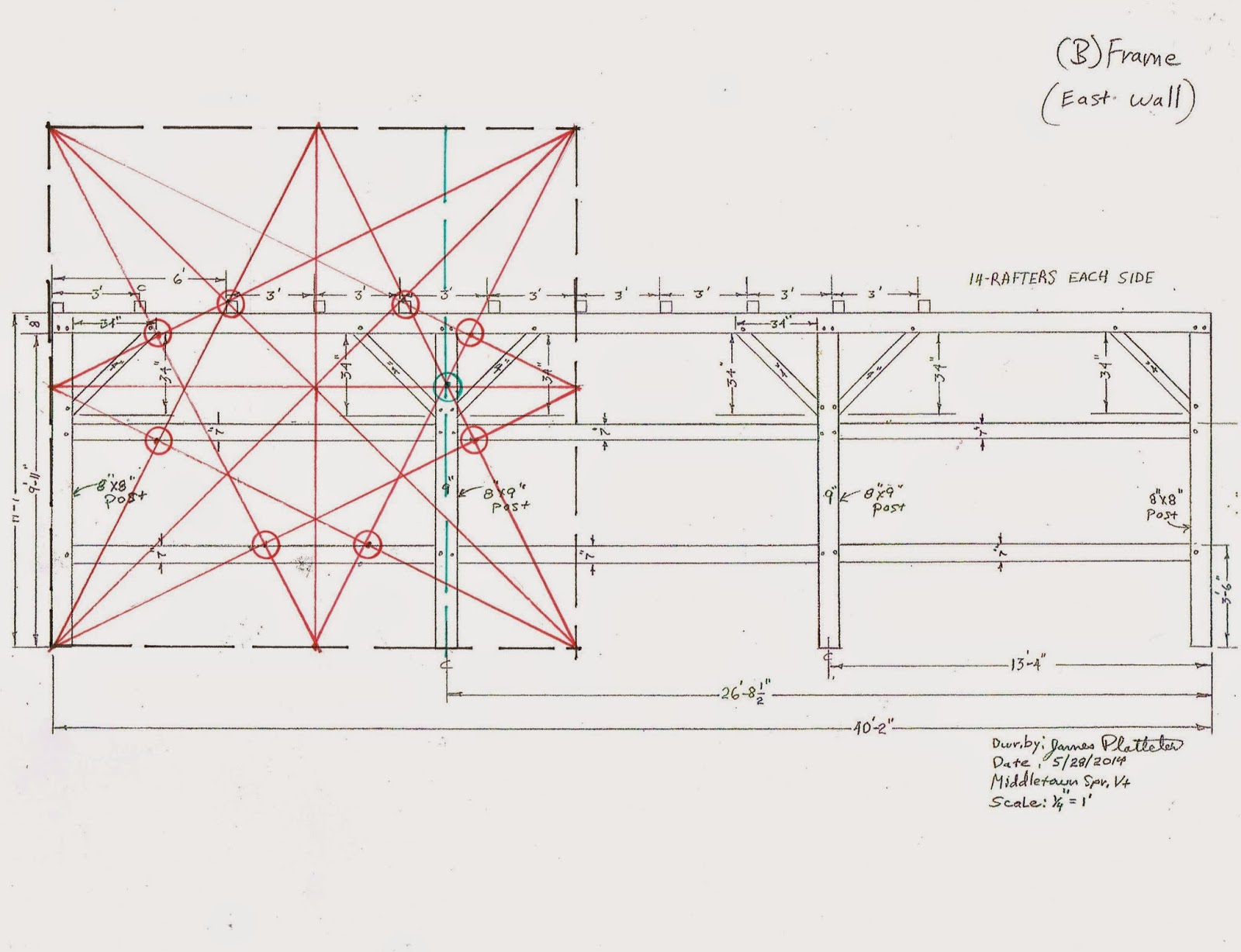 As a traditionally trained Barnwright, I think you do a marvelous job "interpreting" these vintage timber frames. It is hard to say if this was the farmer that did the work of a near by apprenticing Timberwright/Barnwright. Often the Master Wrights of a region would become too in demand to fill all the orders and would facilitate (let) those he may be training take on such commissions.

It appears this frame is more a Dutch/French influenced frame than English, or as you put it "American." The English systems did come up here yet there is debate over whether they or the French-Germanic systems dominated.

The "inch" of 1830 was whatever the Barnwright or local Sawyer said it was, and not standard at all...but more a rough approximation. I work in metric so find many of these frames actually fitting that system well even though it did not exist. Though some Barnwrights may well have used a 10th system of measure in their layout over a 12th system. Squares too where locally made by either a Smith or more commonly by the Wright themselves and out of wood commonly.

Hope to catch you down at Dan's sometime...We could have a coffee and just talk.

I like your idea of the framer being an apprentice.
Yes, the frame is Dutch/French influenced, but the geometry is English. The last barn I blogged about used the daisy wheel. This one doesn't.
I don't know why the framer used a 'divided square'. I wish I did!
When I did the math I saw that the 2" difference between 18' and 17'-10" was so small - about 1/10" per foot! And yet the framer used that dimension consistently. It was not a mistake - it was his length, as you said, his standard.

It is well possible that the Farmer, a Son, or other relative, was an aspiring Timberwright. Just as those that taught me took on the young folk around them with an aptitude for such endeavors. Many farmers and their families had additional skills that was part of the family business, and network of community Artisan/Crafts People.

Hmmm....I am not sure I would call the geometries used in the barn and other architectural layout modalities necessarily "English." Labeling it such suggest that the British Isles is the "root orgin" of these layout methods, and it is not.

I am, very much, a student of the roots of vernacular architecture...particularly that of timber framing. I love the many different styles, and early on became fascinated with its evolution and root forms. Historical architectural geometries and awareness of the "golden section," as well as, all the other dynamic forms of geometry used in the layout of timberframes (be they ship or terrestrial architecture) appears to have its roots "squarely" (couldn't help the pun) in the Middle East. From this region it appears to have spread East millenia before spreading into Europe. From the "Zafimaniry timber framing traditions" to those of the "Kath Khuni" the root methods and their distribution are Middle Eastern with a focus on the Nile Valley and Eastern Mediterranean. In very convoluted and roundabout ways, the methods present in the U.K., today and historically, are mostly Germanic/French in origin of there refinement as applied to timber frame traditions, with many of the vernacular root forms we recognize today coming with the Romans when they occupied most of Europe and the British Isles. Prior to the Romans, with their advanced mathematics and architecture, we only had the Celtic and Hiberni cultures. These cultures did possesses a solid understanding of the use of stone and celestial geometry, yet the forms we see take form later in their timber frames and other architecture appear to take a foundational root in vernacular form of development from Europe via the Eastern Mediterranean and the Middle East.

The "daisy wheel," "square" and many other forms where first used by the Roman and other Middle Eastern Cultures, perhaps thousands of years before they spread into any organized fashion of application in Europe.

Other than the 3,4,5 the "divided spare" is the most common and basic forms. This is why I think (and you picked up on also) this was probably a 'beginning endeavor' for the Barnwright that designed and facilitated the frame in question. I can also suggest that often "on site" discesions for layout became pragmatic in orgin and once applied to the "story pole" it became "rule" for laying out the frame.


Jay, I don't disagree with you at all.

But in my research I have found that the English settlers in New England used the divided square ( see my posts on the Parson Capen House and the French Andrews House, both First Period New England) while the Dutch in the Hudson River used the daisy wheel (see The Van Alen House).Both used the 3/4/5 triangle for expansions.

I do not find framers using the Golden Section - that surprised me.

All the geometries cross, have similar proportions at certain intersections. I look for the ones that are 'spot-on' - the simplest thing the framer could do. In this post I drew how the 3/4/5 triangle could have been used. I think it wasn't - not neat enough, easy and clean enough.

I agree, the English settlers did use the divided square, what I am suggesting is...its not English in either origin, use or application...


"Square layout" is a root form in itself, with the Daisy Wheel, Pentagram, and other forms all fitting comfortably inside it. Even the 3,4,5 is inside the Pentagram, which in turn fits inside Square Layout accordingly. I also feel that the further we get away from the more refined designs of the House Wright's craft and into Barn Wrighting, often the more pragmatic the designs become. In this, the "geometry" is a guide and not often as stringently followed.

The lack of close adherence to the Golden Section within barns and other agronomic structures further reflects the more pragmatic drive behind these structures. Yet...if the 3,4,5 is present, then the pentagram is there as well, and so too the elements of "square layout," which all hold within them the golden section... it is just more obscure in application and not a focal point in the design. More there out of coincidence than intent.

What we see in this barn appears to be a guide that the Barn Wright employed in the initial discussion with the farmer, et al, as they perhaps scratched around in the soil or ash of some hearth. Then perhaps a riven board or piece of rare paper or parchment, or even piece of dehaired rawhide may have seen additional refinements to a graphic representation of the structure to be built. From here however, the design becomes affixed to perhaps a few dividers (if present at all) and most assuredly to the "story pole." The "story pole" in barn and house Wrighting is one of the most invaluable of tools during planning and construction, and often used for an entire career...if not longer. Having carried and used some from allegedly the 14th century, I know how precious they are to the Barn Wright doing the work. This tool, perhaps beyond all others, is the focal point of the project. What is recorded on it becomes the "truth" of the frame and its bones...

P.S. Sorry about the deletions...just me being a bit silly about my editing...