Gunston Hall was built from 1755 to 1759 by George Mason as a home for his family on Mason Neck, Virginia.

Gunston Hall in February, 2014,  photograph by Justin Wilcox, through Wikipedia.
The drawings are from the HABS collection.

Gunston Hall, Return to Splender, the 50 page booklet published by the Board of Regents in 1991, came to me from a friend who knew I would like the pictures, the excellent recounting of the history of the house and its restorations, and the HABS drawings. She was right.

The booklet relates how George Mason began the building himself and then had his brother find and send  William Buckland from England to help him finish the work.

I was intrigued by the fact that George Mason, a very well educated man, realized that he needed help. I wondered if I could see why by looking at the drawings. He knew enough about construction to begin. What happened? Would the expertise William Buckland brought to the work be visible? 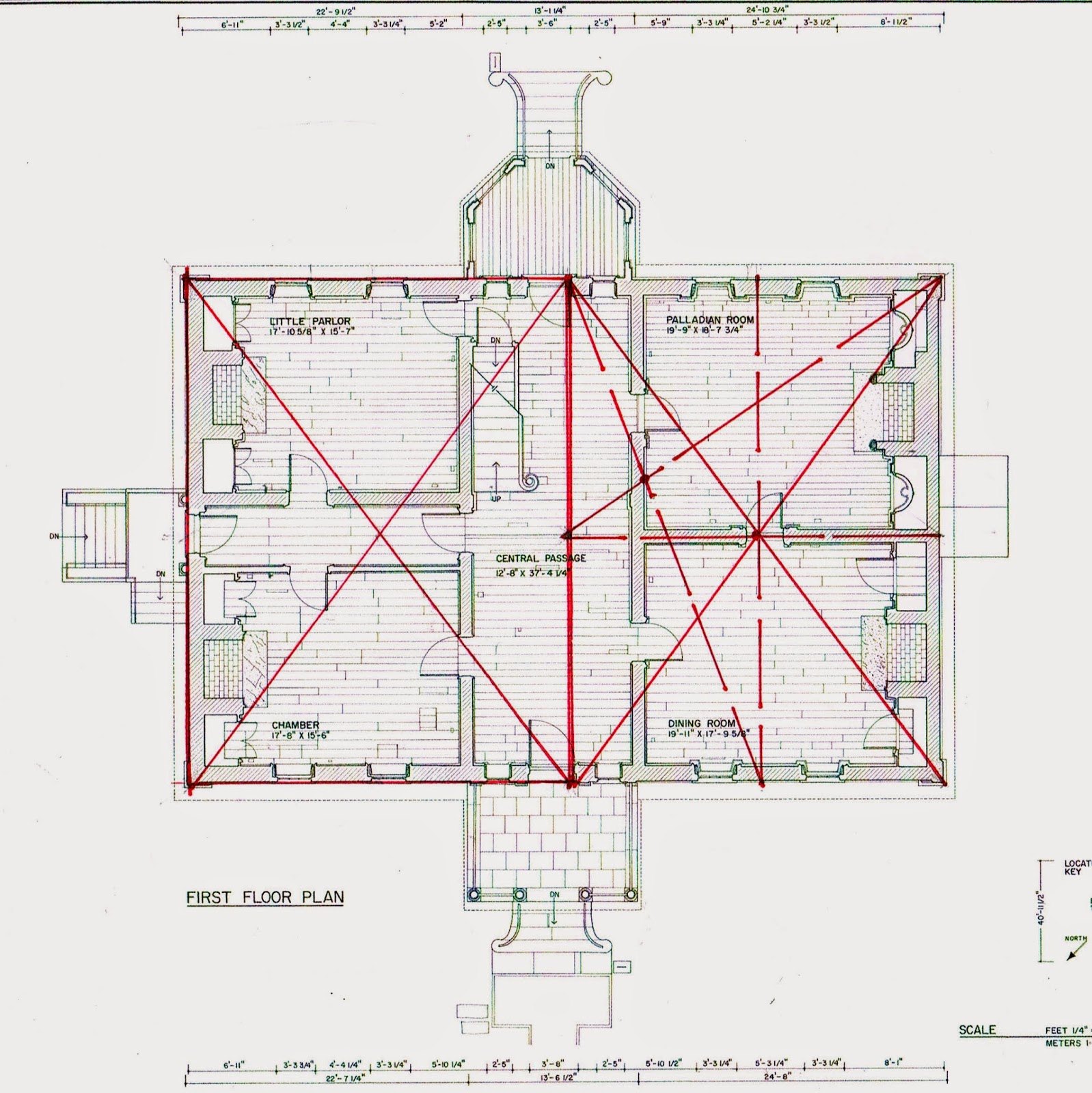 George Mason knew about what kind of  plan would fit his family and their life. He knew how to build with stone and brick, how to set a foundation, cap a window, taper a gable, frame a roof. He knew enough geometry to use 3-4-5 triangles and their permutations.

Remember that the diagrams can be enlarged by clicking on them.

The plan  is 4 triangles, or 2 rectangles with 2 sides 3 units long, 2 sides 4 units long. On the right side he has divided the rectangle in half to make his two formal rooms. He has laid out the diagonals of both smaller rectangles. Where they cross he has placed the wall at the edge of the hall. 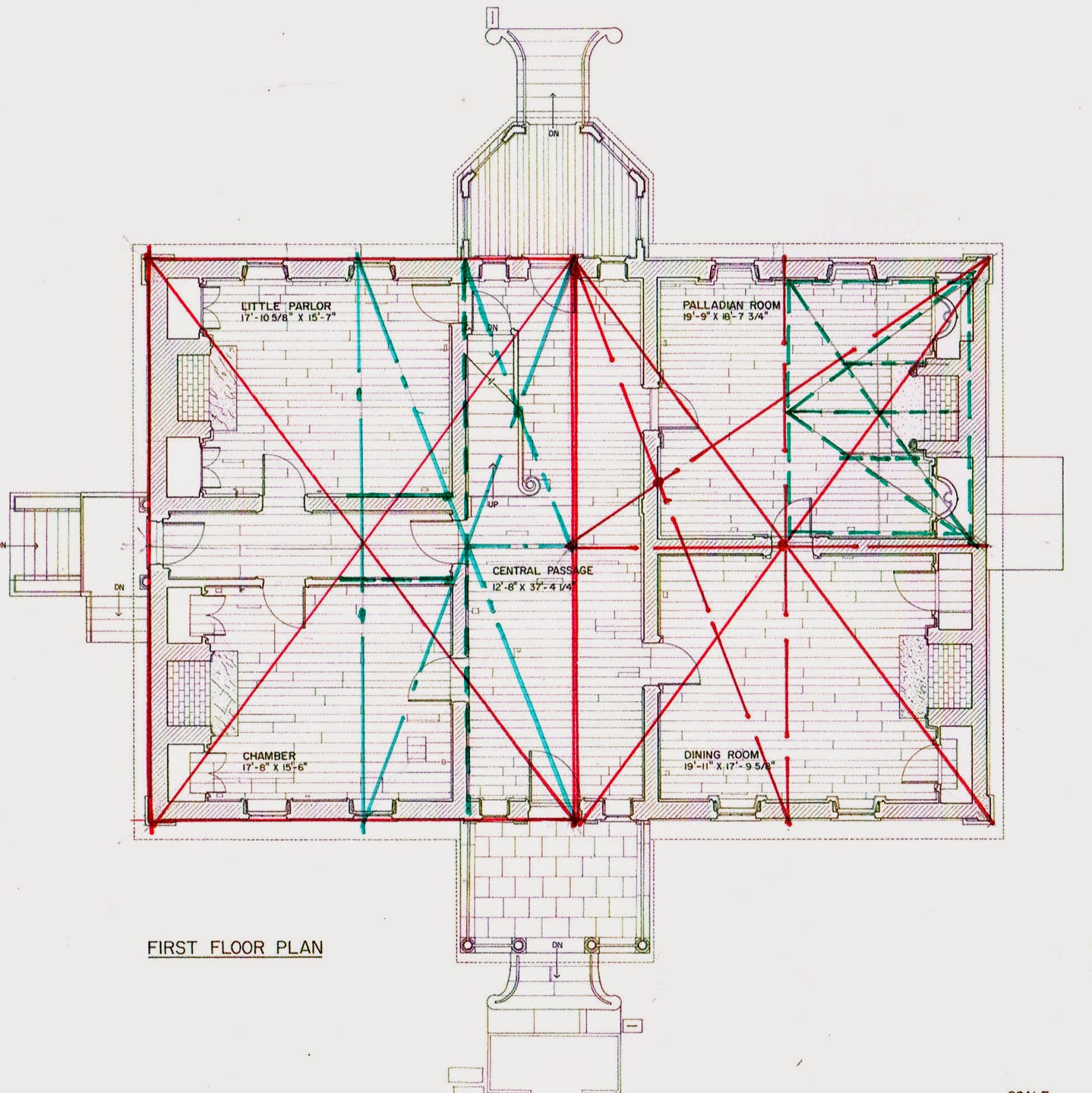 Note that the rectangles do not meet at the center of the main doors, but to the right side.

The left side of the house was the family dining room and the Masons' own room which Ann Mason also used as office as she managed much of the plantation.

Here a hall separates the rooms.To determine the width George Mason divided the rectangle in half lengthwise and then added the diagonals. The center point is the location of the inside of the wall to the hall. Where the  diagonals cross to the other side of the brick wall, the corridor walls begin. Note that the stair width is also determined by another division of the rectangle and its subsequent diagonals.

On the right side the inside space is divided - it would be smaller than the outside space - into thirds to place the fireplaces in the center of the rooms. I think it is possible that this is one of the changes Buckland made.
Understanding that wall thickness can throw off symmetry comes from experience. Buckland had training as a finish carpenter (a joiner), but he was young, just 22. Mason was 30; he knew brick and mortar, not perhaps not the finer points of symmetry. Proving this supposition would only be possible if the chimney stack was opened and taken apart - not very likely! So this is truly conjecture on my part. 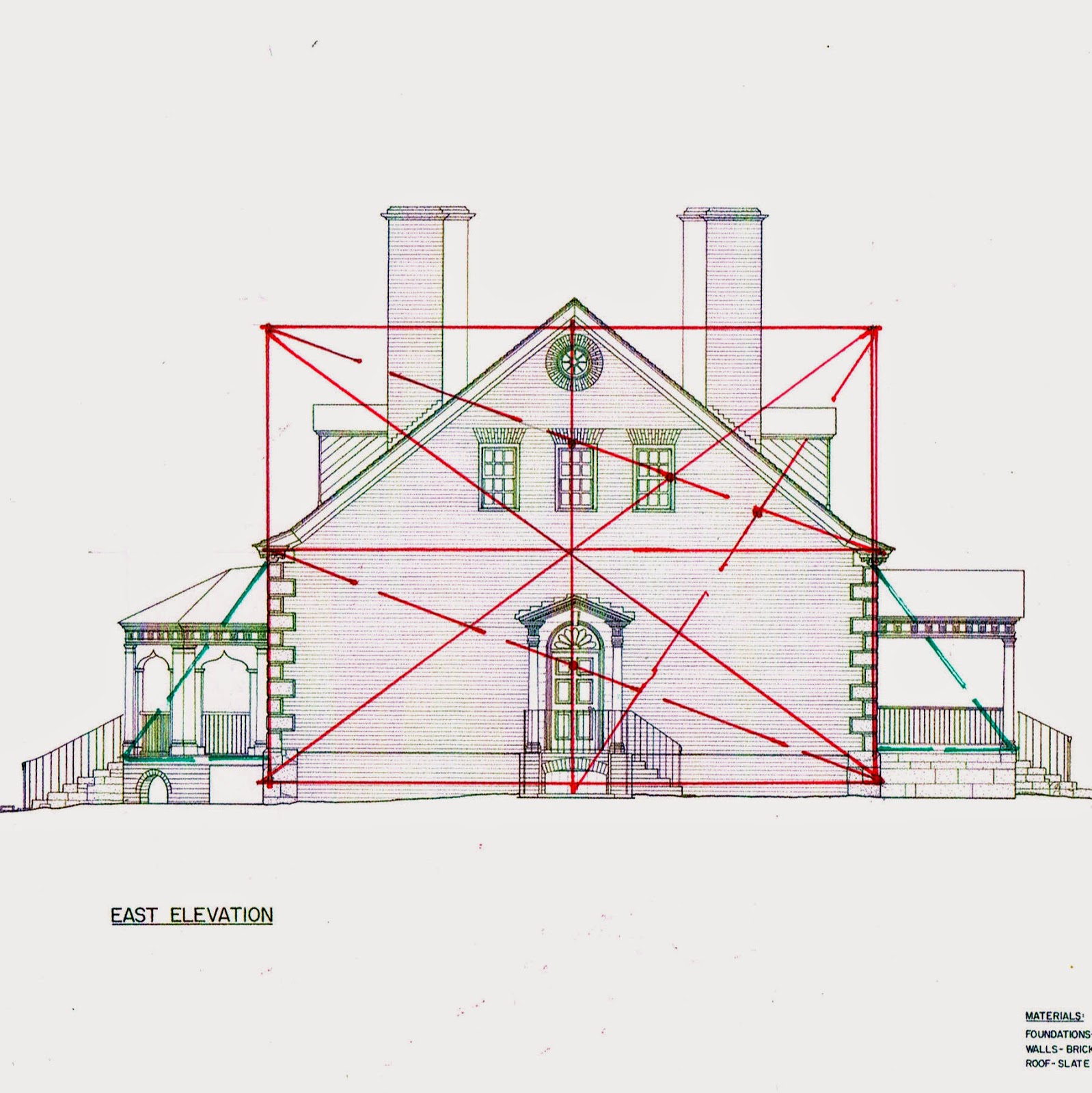 The end elevations continue to use the 3-4-5 triangle for its proportions.
The door is centered. The top of the brick walls is the top of the rectangle.  The gable repeats the triangles. The bricks end on the upper edge. The shape is square and sound, made possible by the 3-4-5 90* triangle which is always true.
I have noted with a strong dot on the upper diagonals how the window height and location are also determined by the diagonal intersections.

Note that the depths of the porches are also 3-4-5 triangles -  drawn in green. 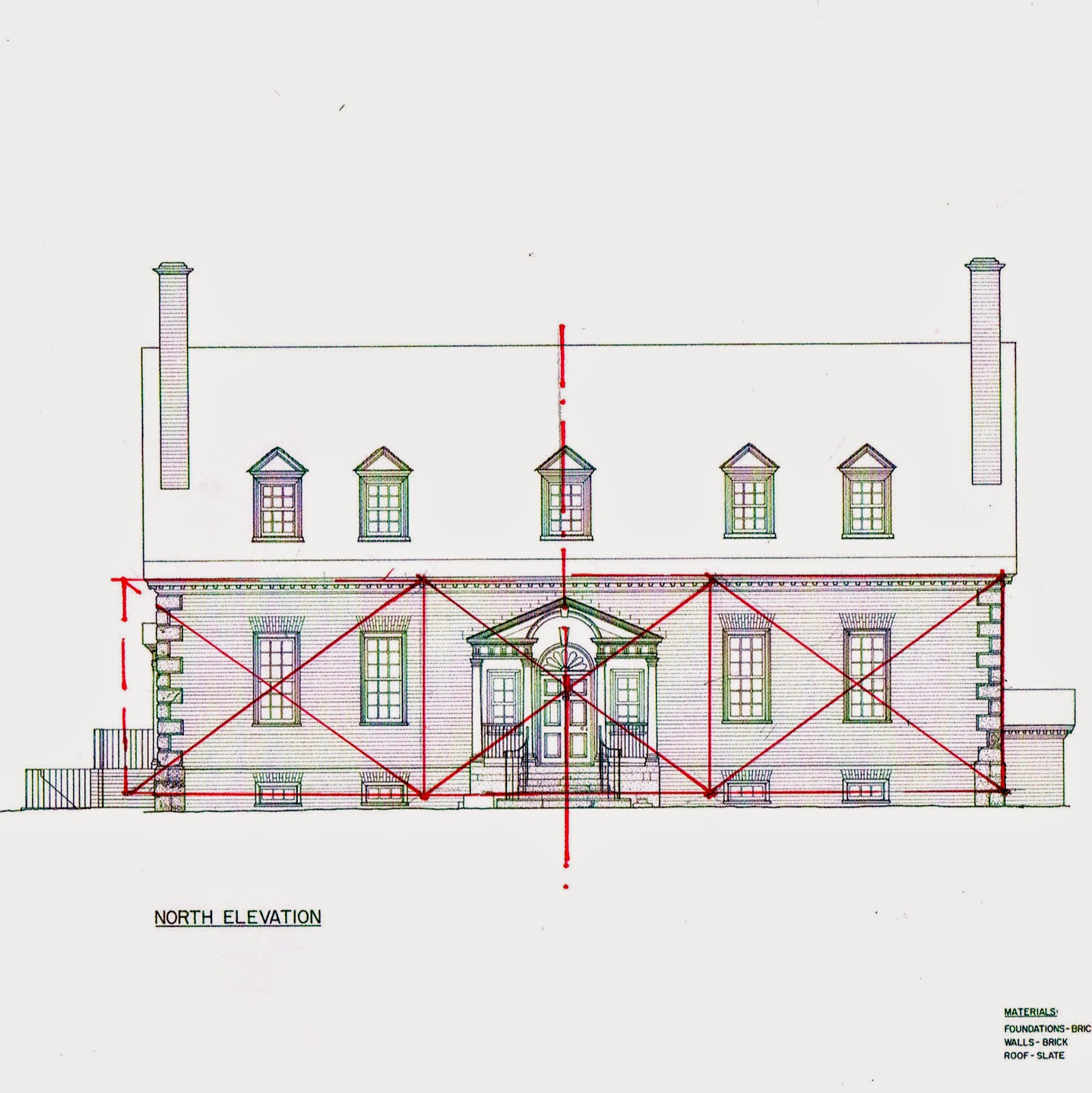 So then to the main elevations, one facing the water, the other the road.

We already know that the left and right sides of the house are not equal as George Mason wanted larger formal rooms on the right side.

Here is where I think he got himself in trouble: the left side is truly not as long as the right - see the dotted red line. Look carefully and the dormers: they are balanced but not symmetrical, nor evenly spaced.

Perhaps Buckland stepped in here, adding the windows on either side of the front door.
What he really did was divert the eye - he added the Gothic porch to the river front: inviting, decorative. with half circles and Gothic curves. We are drawn to the porch and ignore the symmetry. 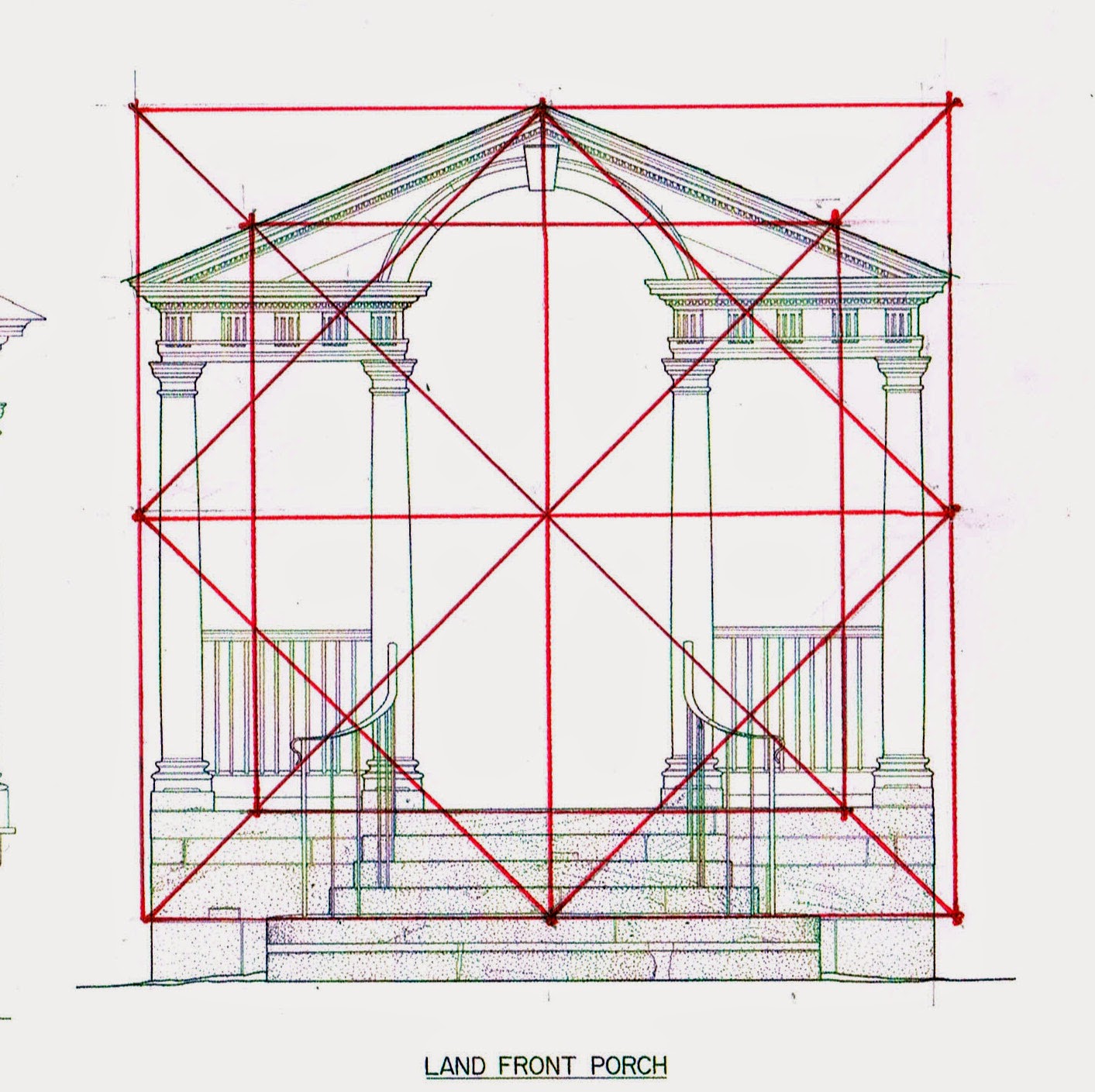 Here and in the house his knowledge of Palladio and what was fashionable in England is obvious. William Buckland knew the classic vocabulary. The booklet shows how plain the walls were without his embellishments. His  use of geometry was also much more sophisticated than George Mason's.

The road front porch which we see today came later, after the Revolution. As roads and bridges improved visitors arrived by carriage, as well as by boat.
The center arch within the pediment, flanked by openings marked by classic columns and lintels, comes right out of Palladio's Books.
And it creates an inviting porch. It is scaled to people - we would like to standing there, hand on the railing, welcoming a guest coming down the drive.
This layout that we now call  'Palladian' was already widely used in Virginia churches where it was referred to a 'Venetian Window'.

I have drawn the first square - set on the diagonal -  that comes from the height. From that comes the outside dimensions, the outside square, and the square turned 45*. The lines regulate the roof pitch, the floor, the line for the lintels. No doubt he adjusted the size of the square to fit the space. 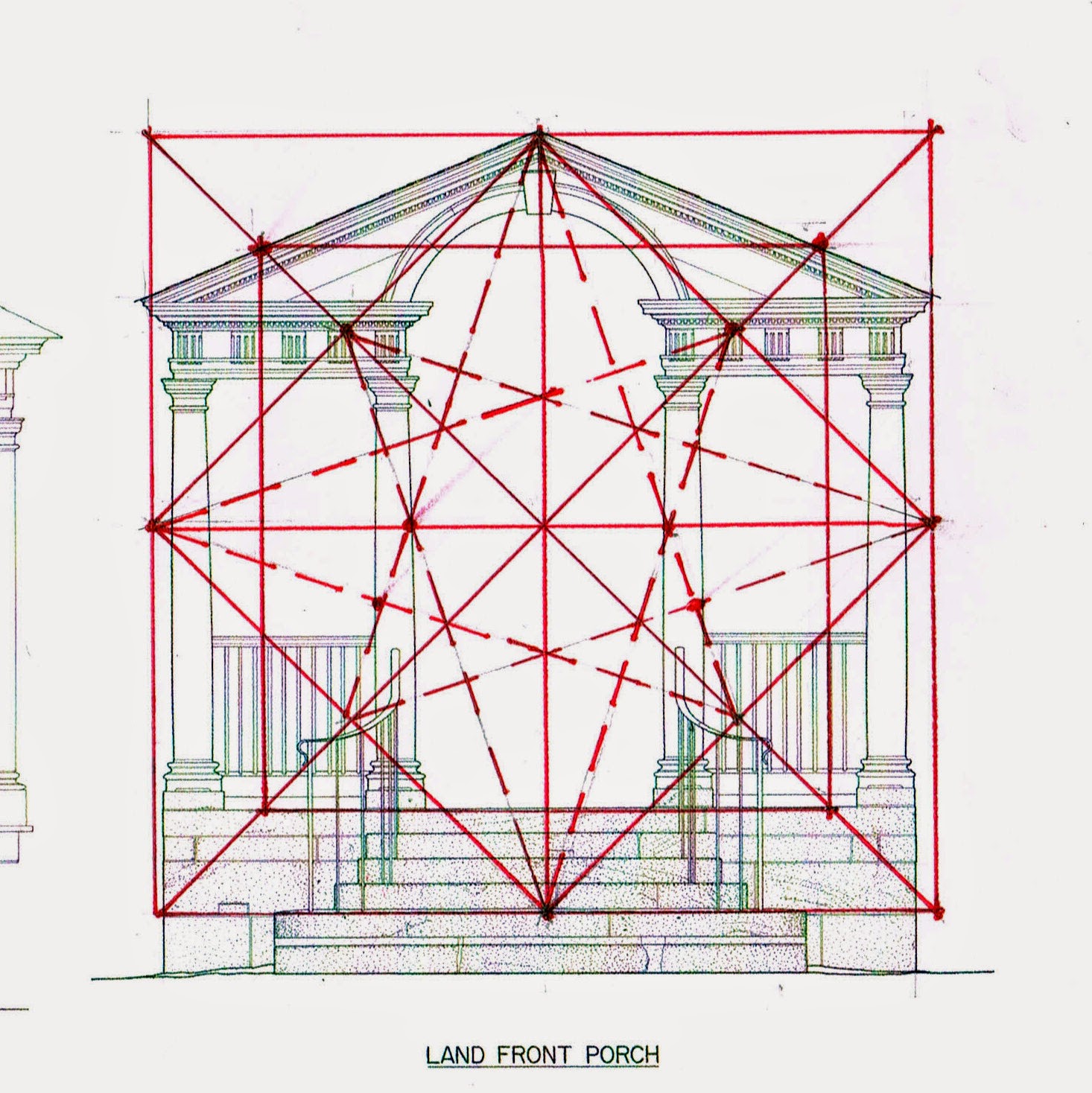 Then the squares are divided in half and the diagonals added. Now the placement and the width of the columns is determined. 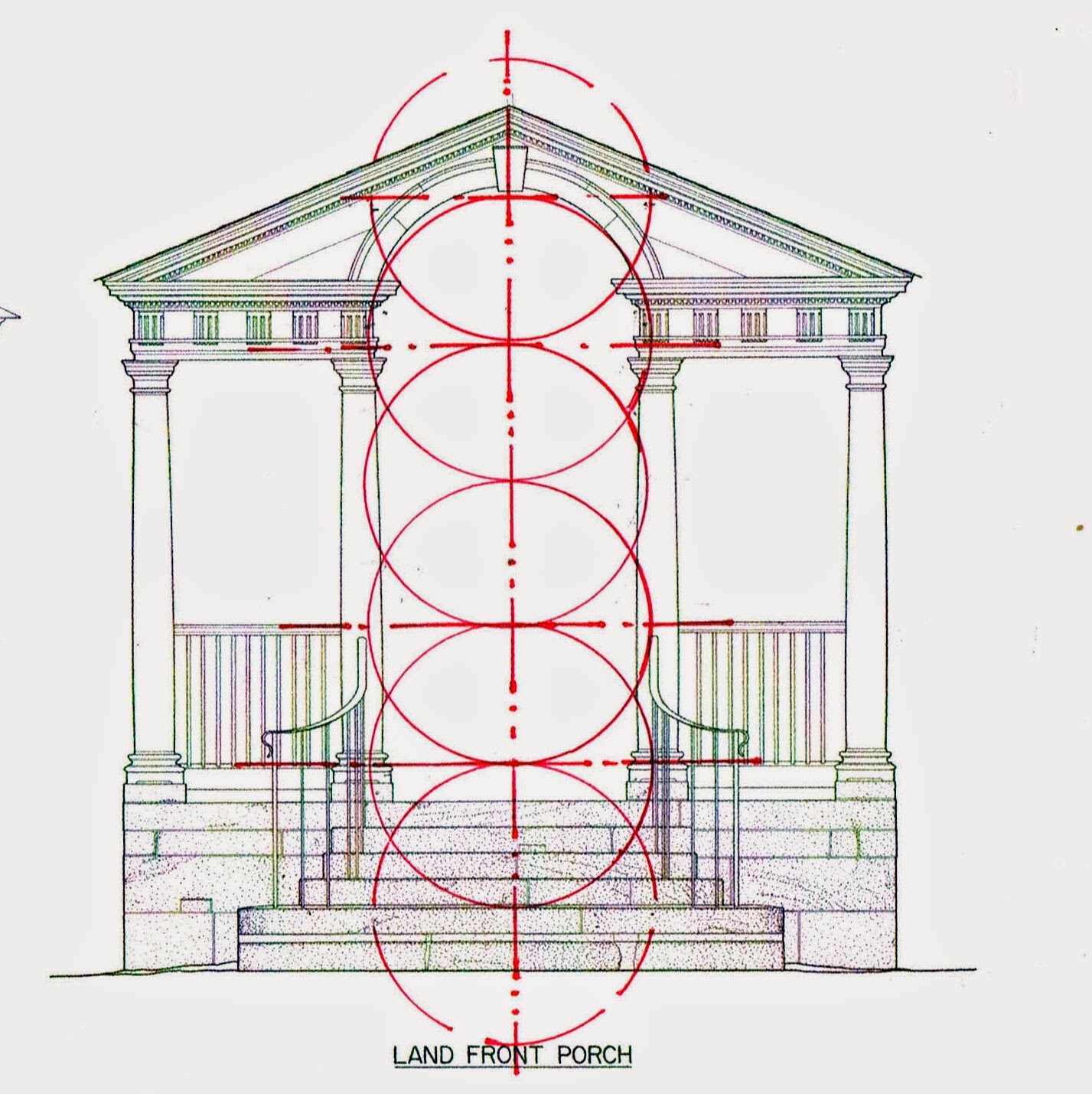 I add this diagram to show how the semi-circular arch in the pediment unfolds down the center of the porch to mark the top of the columns, height of the railing and lands on the first step above the foundation.