Please see 18th c. Virginian Folk Houses, Part 1, where I describe why I am looking at Henry Glassie's book, Folk Housing in Middle Virginia, 1975, U. of Tennessee.

NB: These 2 posts have been updated with new posts as of November, 2022.

I am using Dr. Glassie's drawings. I am thankful for the chance to look at the geometry to the houses, many of which no longer exist. But I can't verify when I have a question. For example, "Is the window right there or maybe a few inches over? That would fit the symmetry.... " "The drawing isn't quite square. Is that caused by
the printing or was it real?"

I would really like to have been there as the houses were built. Then I would know. I need Dr. Who's Tardis.

So, between now and the loan of the Tardis, I have decided to make some assumptions for this next house.

It is the Lesser Dabney house, figure 45, Type 3, House V.Dr. Glassie's book includes a photograph and several other drawings of the house. It was probably built after 1770. 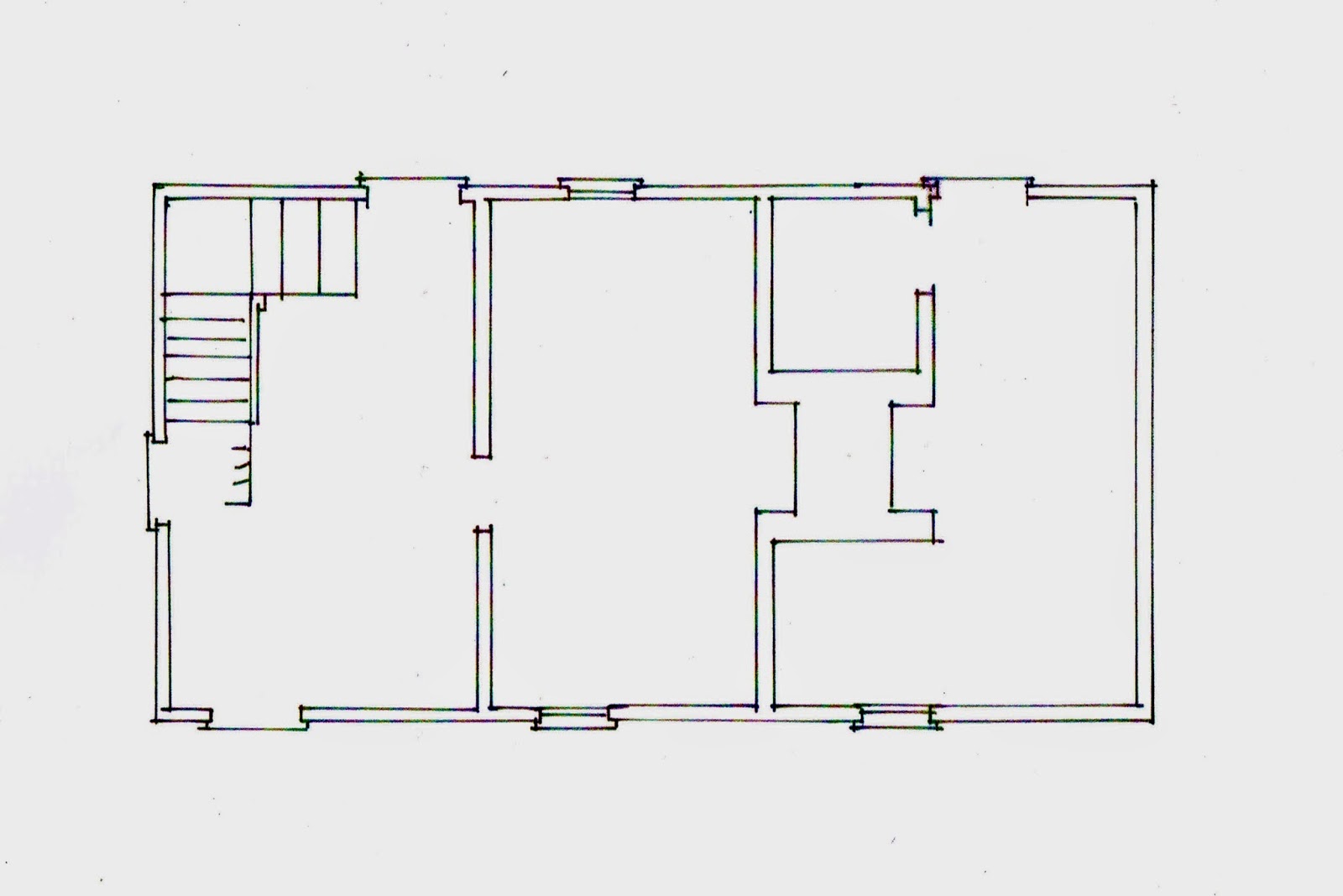 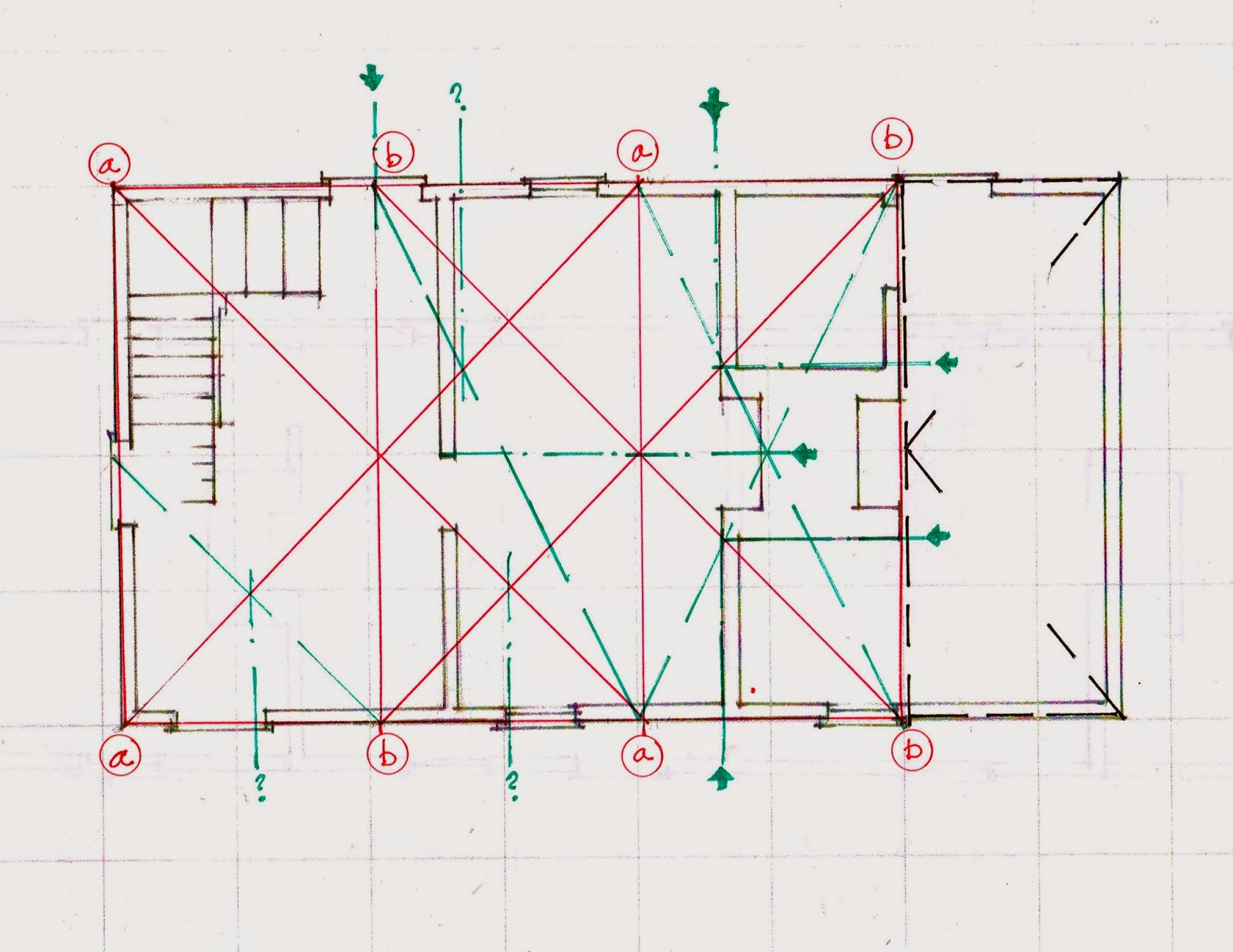 The original house included the chimney, but not the shed on the right.

I have outlined the house in red.
There are 2 overlapping squares -'a-a-a-a' and 'b-b-b-b',  or 3 equal rectangles made up of 2 small squares each - 'a-b-b-a'. or half of the large square. This is where I am taking liberties - Dr. Glassie's proportions is not quite as true as I have shown them. The parts do not line up as neatly if I scale on his drawing. But when I make them neat - a couple inches either way, they fit in a simple pattern.

I have drawn the diagonals that determine placements with a green dashed line. The determining lines are a green dash and dot line. At the end of the ones I think are where they belong I have added an arrow. Where it doesn't quite work - but so close! almost! - I have added a question mark:'?'. The shed's dimensions are determined by the width, divided in 8 parts, and the length, the extension made from 3 of those parts. This results in 2 3-4-5 triangles and assures a square fit of the wing to the house. 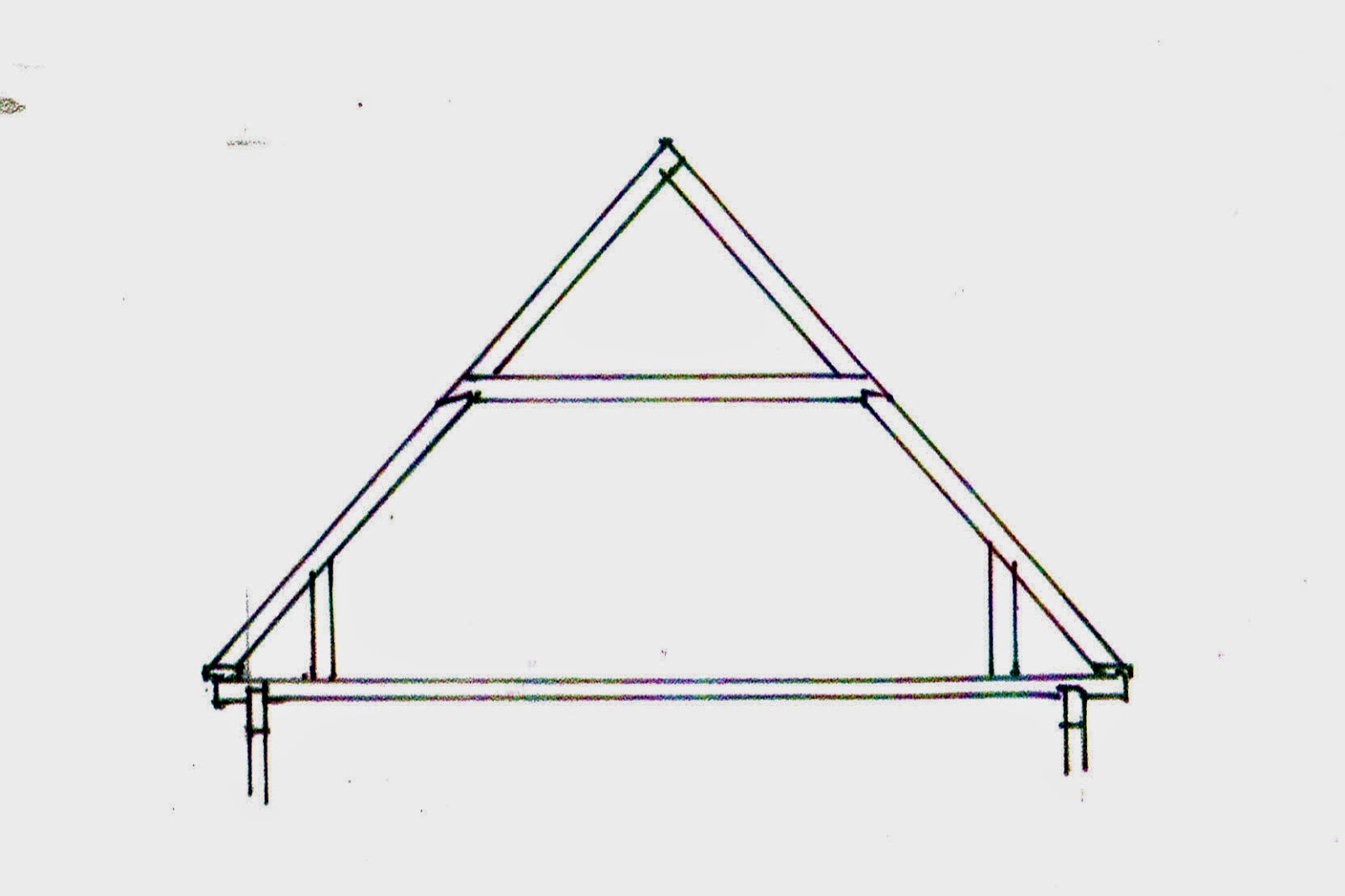 Here is the roof frame of the Lesser Dabney house,
Figure 69, The Loft, a section through the frame of house V.
Dr. Glassie included the interior wall finish (I think). I have left out that line. 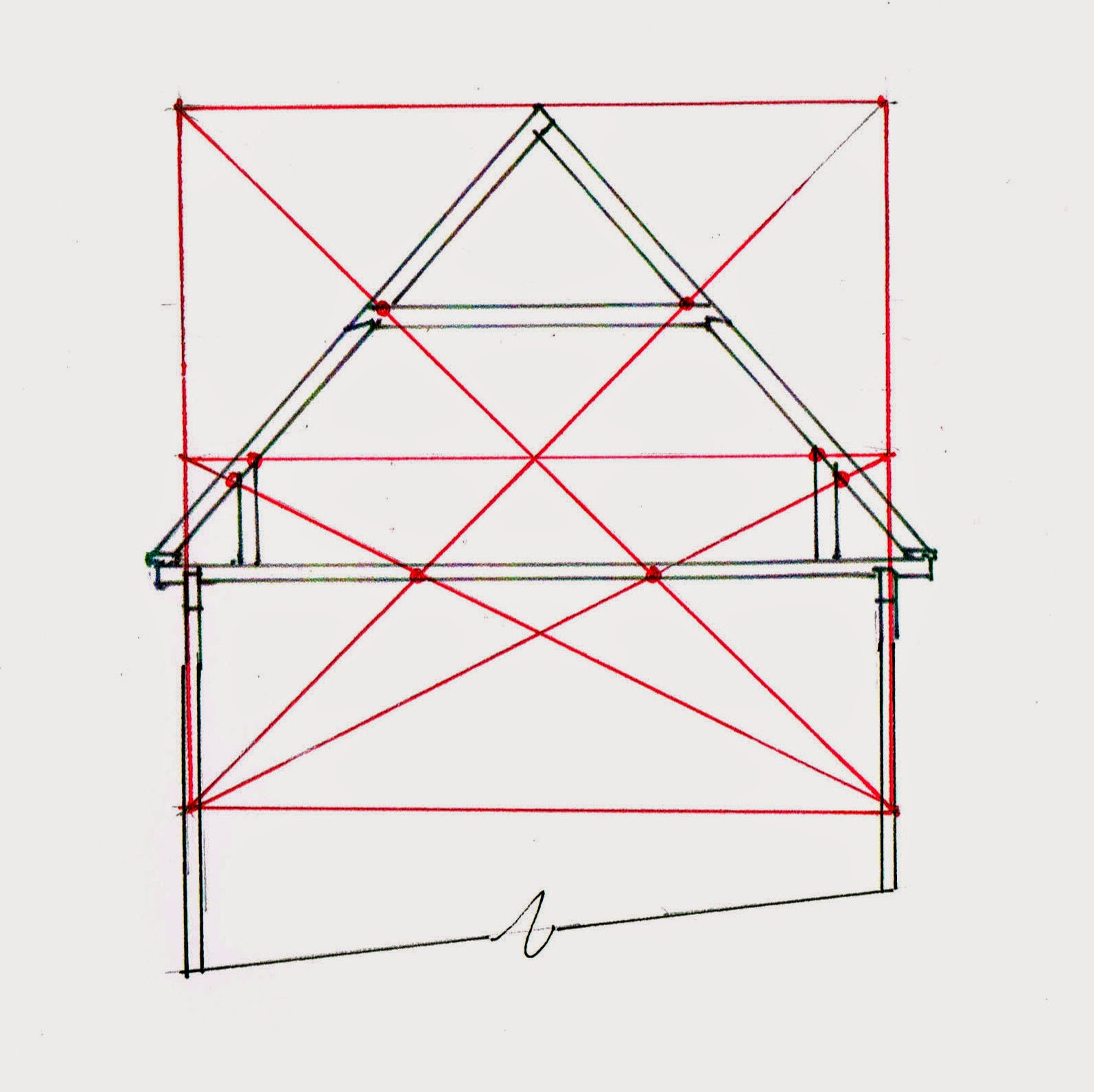 Thinking about how the roof would have been framed to sit on the walls below, I extended the line of the posts as high as the peak. Then I crossed the diagonals to make the square, and crossed the collar ties at their juncture with the rafters. The center-line of the square crosses at the top of the knee walls. the diagonals of the half square cross the diagonals of the full square at the ceiling joists.
I am sure there were other considerations: reinforcing the eaves where they kick out, and tying together the rafters at a point where they will adequately hold the frame, but leave enough head room to make the attic useful.

Both of these two houses are they were printed in Glassie's book, Folk Housing in Middle Virginia. I didn't adapt anything. The geometry was obvious and easy. 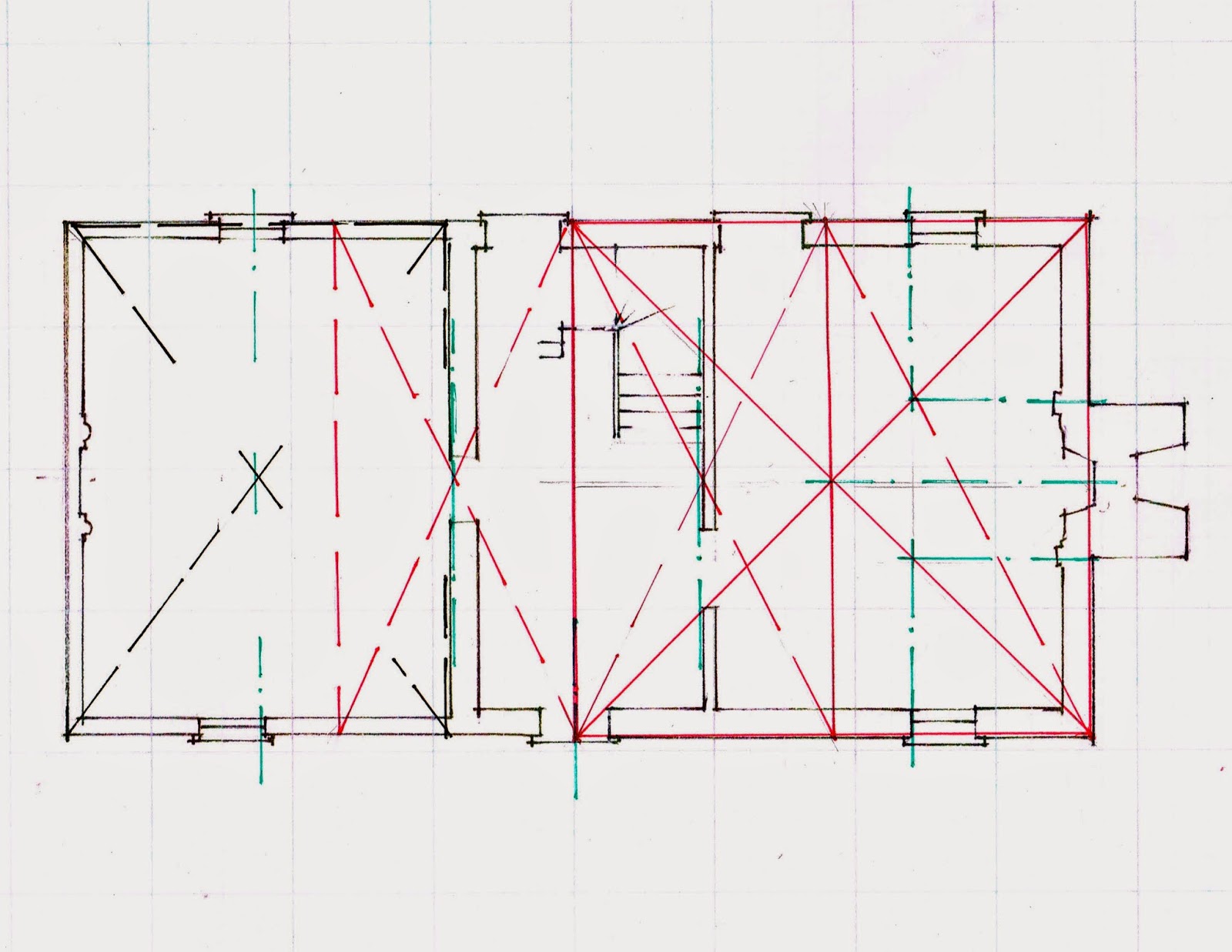 This is Figure 39, The Central Hall I House, West of the Blue Ridge. A.
It is in the Valley of Virginia. The right side, through the entry hall, is built with logs. The left side added later.
The pattern of the original house is familiar: the square - red solid lines - and its half squares - red dashed lines - with the intersections of the diagonals marking window openings, chimney width, placement of the wall between kitchen and entry hall, and the  1/4 width added to the square to give the entry hall enough space for a turning stair- green dash and dot lines.

Then the left wing was added. Its dimensions are the 3-4-5 triangle - black dashed lines - with the existing wall designated as '4'. Its center-line locates the windows - green dash and dot lines again.
The windows on the front wall are not quite equi-distant from the corners, but close enough to read as balanced. 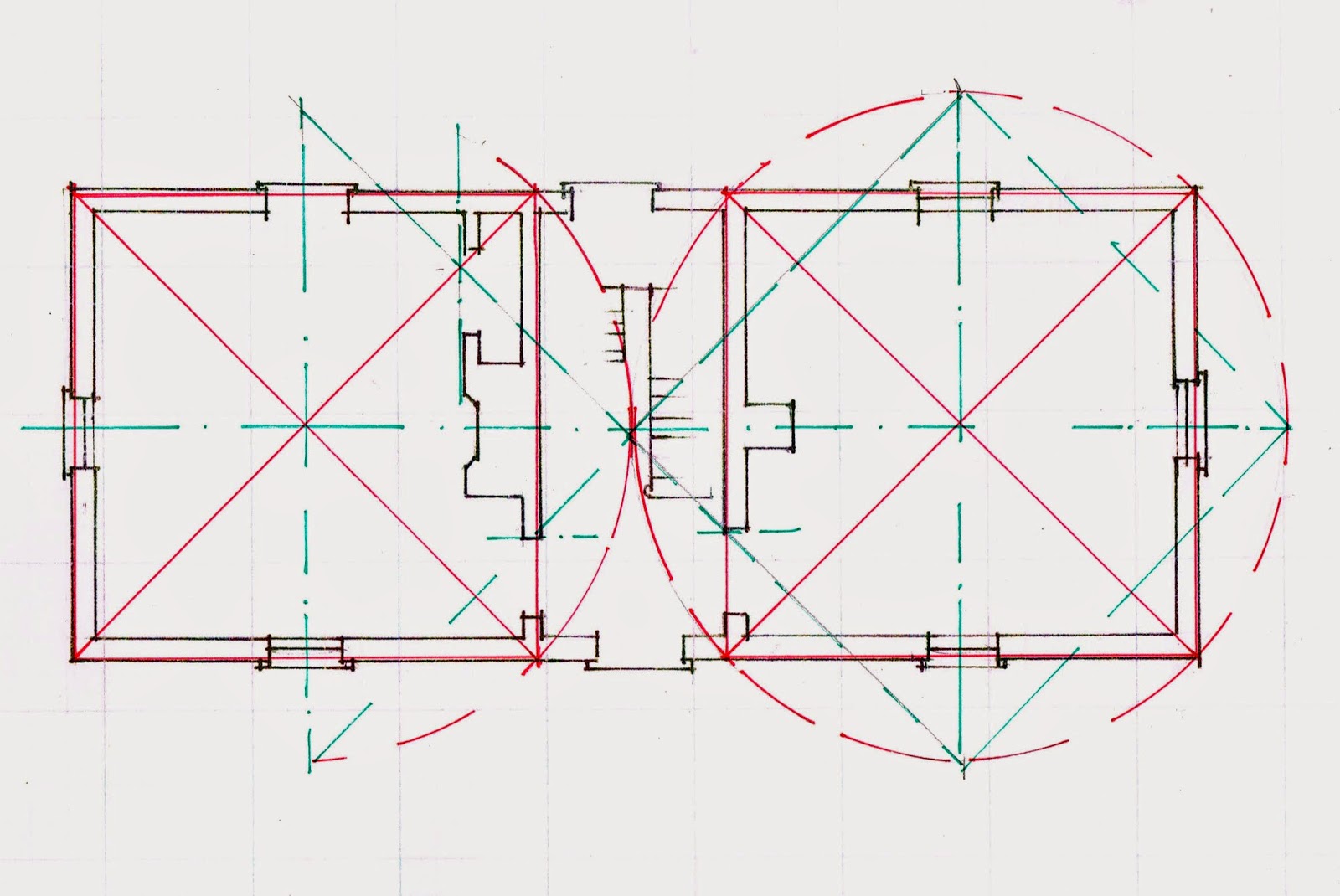 Finally,  Figure 39, The Central Hall I House, West of the Blue Ridge, B. A house in Falmouth, Pendleton County, Kentucky.

Both rooms are square - red lines, their windows, doors, and fireplaces are on axis - green dash and dotted lines. The circle around the square - red dashed line - determines the width of the hall, the relationship between the 2 rooms. It could also be found by turning the square 45*. Those intersections also place the doors into the hall and the fireplace and closet in the left hand room - green dashed lines for the turned square.
This  house, if its chimney in the right hand room for a cast iron stove was built with the house, may date to the 1830's.

Nice post! Where you show the framing for the roof, do you know the overall height of the lesser dabney house or how to determine it? I've looked around for more photos of the house, but I can only find the image included in Henry Glassie's book. Do you happen to have more details on the framing (timber size, corner posts, bracing)?

Thanks in advance,
Brandon

Thank you for your comment. I am sorry that I have no more information to add.
The information I presented in this post came from Henry Glassie's books. That is all that probably exists. When Henry Glassie recorded these vernacular houses few people thought they were important to record or save. When I visited the area I saw similar houses, but none that I could easily visit and explore, let alone record.
The geometry of the building gave the builder the height. He did not need a number, a dimension.
For more information on timber framing in that era you might look at regional historic house sites where similar buildings are now being repaired. For example, Mountpelier - Madison's home - has rebuilt a slave dwelling where foundations were found. The frame was probably well researched.

Thanks for your response, Jane. Shortly after I posted the comment above, I found your PRACTICAL GEOMETRY - Lesson 4 and used the procedure detailed in 'The end elevation of the house laid out' and it looks right to me. I came up with 14.25-12 for the roof pitch based on your diagram.

I will see what I can find locally for examples of construction, Montpelier is just down the road from me.

Your comments were the catalyst for a beginning rewrite of these posts. I have been researching some simpler forms, ones more likely to have been used in vernacular housing. I applied my new (to me) understanding to Henry Glassie's plans, and found easy layouts that would be much more appropriate to folk housing. As always the question is, what would rural timber framers have known and laid out for basic living spaces?
Please check the first update. I have not yet finished the drawings for the second.

Any comments are welcome. I hope you will post about what examples you find locally.