Folk Victorian, in a great neighborhood 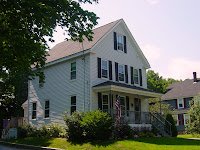 The family of 5 who lived here liked their house, their yard, their neighborhood. They just wanted one big space for all of them and their friends instead of two skinny ones almost too narrow for furniture. And how nice a fireplace would be!

The solution was to removed the wall, making those two little rooms one, and bump out a bay for a gas fireplace with window seats on both sides. The fireplace is direct vent, so no chimney.

the house before the bay - above
the house with bay - below 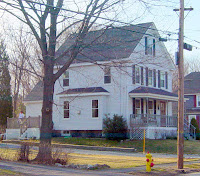 While the wall between the rooms was not structural, the outside wall which was removed to add the bay, was. Rather than carry the part of the house above that bay on one beam that spanned the entire opening - an expensive option - we placed a column on either side of the fireplace. The spans then became like those of a window or door, easy to frame conventionally. 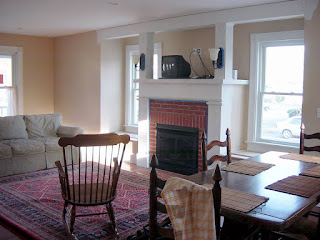 Now, instead of a too little space in the living room to place a chair across from that couch and a dining room almost too small for a table, there is space for both. Invisible here is the library space between the couch and the front wall with the family's antique desk. As the house had a simple c. 1905, Late Victorian/Colonial Revival interior, we added just enough molding to let the posts read as columns and pilasters.

The photograph shows the room before the painting is complete. I do like those sunny window seats!
Every client has a budget. Providing a solution within that budget is the challenge, a good challenge that required creativity and communication to make sure the solution answers the client's problem. This design was possible because the family agreed they did not need a separate dining room.