This picture of a 1854 construction site had me hoping, even if it was idealized. 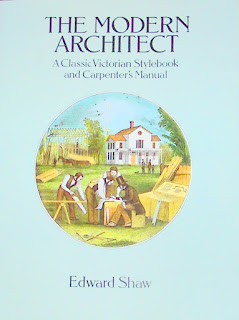 The architect - wearing the stove pipe hat - holds dividers as he measures something on the drawing for the observant and expectant carpenters. In the foreground on the grass is a carpenter square, a hammer, and a large compass.

Maybe Edward Shaw's pattern book, The Modern Architect, published in 1854, would mention geometry! Maybe I'd find mention of proportions in a paragraph about something else!

Well, he does say that a main floor window's height should not be more than double its width. Room length, breadth and height and height are mentioned in relationship to each other. But then he states that 10 ft is the desired height... There is great advice for the carpenter and homeowner about foundations, lath and plaster, and 'warming'. Fun, but not what I hoped for.

Shaw's life (1783-1859) spans the change from custom to repetitive parts in construction. The picture shows a building being balloon framed with 2x's , not posts and beams. The drawing in the illustration is being measured and scaled up by dividers, an ancient tool, not a modern architect's scale with regular increments. Almost anyone can draw circles with a compass. In the time Shaw practiced master carpenters and architects knew how to use compasses for design, layout and framing of rectangular buildings.
The book includes extensive explanation of how to lay out columns, scrolls for hand rails, and molding details that would require a hand held compass. The large compass shown would have been for stepping off foundations and wall locations based on the drawing made by the small compass. Or it is possible that the 'compass' is  perhaps a level, folded up.

The picture is the cover of the Dover Publications reprint of Shaw's book. Inside is a reprint of the etching in black and white. It is too dark to reproduce well. For a look at the original print try: http://www.historicnewengland.org/preservation/your-older-or-historic-home/articles/pdf149.pdf . It is part of a good article on a mid-19th century Maine builder in the SPNEA journal, 1967. SPNEA (Society for Preservation of New England Antiquities) is now Historic New England.