The Compass in Construction

Compasses are regularly portrayed in construction images, and are also regularly ignored. 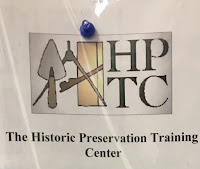 I gave 2 presentations on the use of compasses in historic layout and design. More than 30 participants practiced their geometry - with enthusiasm. They asked good questions. 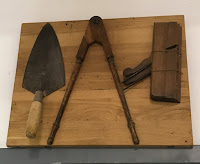 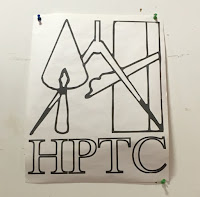 PTN workshops were held in the shops, the yard and storage bays, and an office of the Training Center. Around us were the HPTC logos.
They all included a trowel, a plane, and a compass.

As posted here:
top: on a brochure
middle: real tools mounted on a board hung on a wall
bottom: an image posted on a bulletin board

I asked the staff who came to my presentation what they knew about using a compass. They told me: not very much. 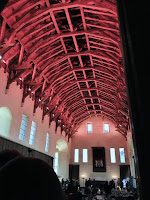 The image of  a compass is there, along with a trowel for plaster, masonry, and stone work and plane for wood working. The compass as an equally important tool for layout and design. The understanding of how and why to use one has been lost.

In September, 2019,  PTN joined with Historic Environment Scotland to hold the International Preservation Trades Workshops (IPTW) at the Engine Shed, Stirling Scotland. I gave 3 presentations with slides and hands-on practice drawing layouts and elevations without numbers,  using only a compass, a straight edge, and a pencil.

Our final evening we dined in the Banquet Hall of Stirling Castle, historic home of Scottish kings, including Mary, Queen of Scots, and James VI who became James I of the United Kingdom.  (No, the roof trusses were not this pink! just what my camera saw!) 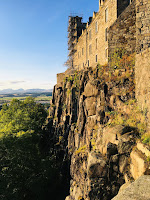 Before dinner we toured the castle which is set high above the land and the river.

It is beautifully cared for; the rooms used by the royal family furnished with fascinating furniture and tapestries depicting the time when Mary Queen of Scots and James VI lived there. The signage is excellent: clear, colorful,  with historically accurate graphics and information. 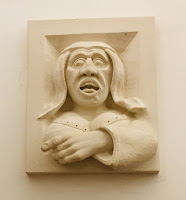 Even jokes were in period dress: These plaques were beside the  restroom doors; a medieval beast which might be a griffin was watching from the newel post. 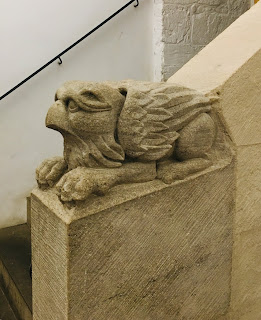 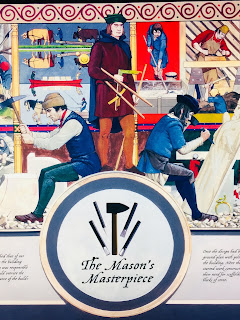 This poster was in the courtyard. I liked the images:  the tools in use, the appropriate clothing, and surroundings. visually interesting and easy to understand.


The text explains the work. Except for that compass the master mason holds under his arm.  It is perhaps 24 inches long, with brass fittings and an armature to set the span. This is a serious instrument.
No explanation is given for its use. 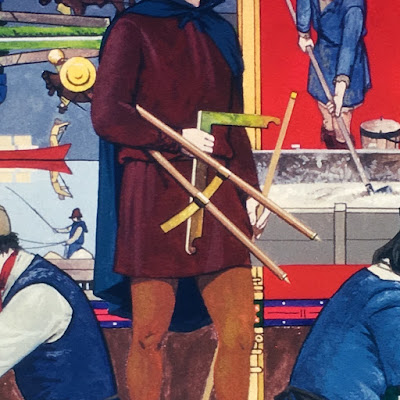 I think people simply don't understand how a compass was used. No one  asks how the project was organized, how it was planned and set down so that all the craftsmen  could reference what was to be built.

How did they share their understanding of the scope and detail? The master craftsman laid out the design of the work.
He used his compass to accurately draw and explain his plan to  the other workmen.
I looked on the internet for the proper name of the 'armature' on a compass used in construction. 'Hinge' is sometimes used but that refers to the part where the legs join.  In the 1920's the 'arm' had become a bar with an adjusting screw; the compass called a 'spring bow".
Because there is so little written about compasses used in construction I may need to revise this post as I learn more. 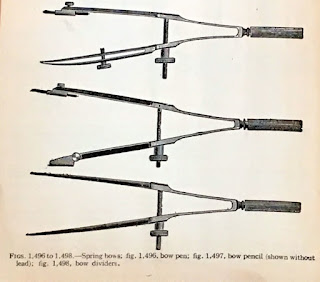