A report from this summer - when I first explored the house - to accompany the geometry of the previous post. 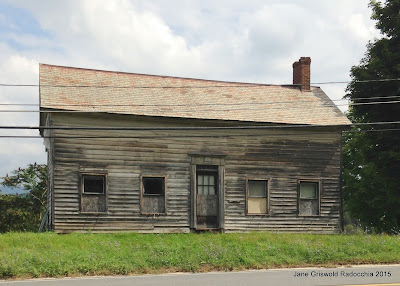 Today the house is being dismantled, piece by piece - see the end of this post -

I have watched this small house for more than 10 years, hoping its Dutch framing and Federal style would endear it to a new owner. Its shape and proportions, its entrance, frieze and rake are beautiful. I am delighted it has been purchased.

I explored it twice inside and out, basement to attic framing, and herein share what I saw. 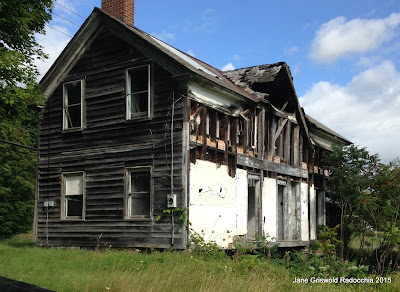 The house was added to an earlier home, now gone, which then became the service wing.  The stone foundation for the first house exists as does a partial roof and ‘ghost marks’ and well as doors connecting the new and old wings.

The original home, which faced south, included the kitchen and bath.
The frame on the east side is exposed. Brick nogging used as fire stopping and insulation is visible as is a solid post and beam system, approximately 3 ft. on center, with intermediate studs. 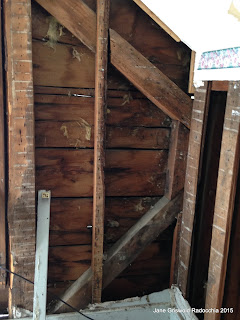 The southwest corner of the 2nd floor  appears to be an H-bent – a traditional Dutch method of framing.  The roof frame is pegged common rafters.  Dismantling will show more.

The wall and ceiling plaster was applied to split lath:  ½” wood planks forced apart with a hatchet so that the spaces in between would hold the plaster. 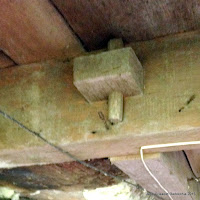 The foundation is local stone. There is no basement fireplace, just support for the one above. The photograph shows the mortise and peg on one end of the beam supporting the stone hearth in the living room.
The north side of the basement, beyond the stair, is a crawl space. Some floor joists have been somewhat compromised by the intrusion of plumbing and heating systems. These will be repaired. 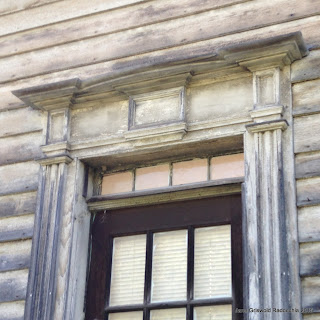 In 1790, the house faced the main road between Lansingburg, NY, and Rutland, VT, 2 growing commercial centers. Many people would have passed by, traveling about 5 -7 mph on foot or  in a wagon, 12 mph if on a ‘Trotter’, a fast horse.


No one traveled so quickly that they would  not have noticed and admired the front door with its entablature and columns, its frieze and rake at the eaves, and even the ¾ rounding of the corner boards. 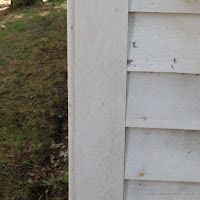 The bead on the corner boards is a typical detail in this area when the house was built - here shown on another house. Those on this house are too worn to be salvaged. The original door has been lost. 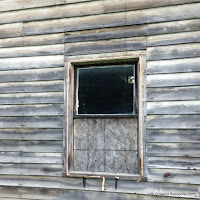 The windows were once the height of the front door. The short sections of siding above the modern windows indicate the original size. The exterior window casings would have been flat boards with banding. The header protruded to shed water and protect the window. The sills appear original. The sash was double hung, maybe 8/12 or 12/12 panes. 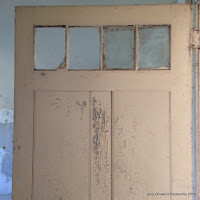 The interior door’s lights and the transom window’s proportions will help determine the right pattern. 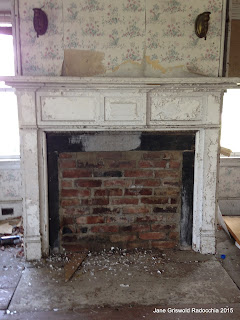 The fireplace has a stylish Federal mantle like those seen the patterns books of Asher Benjamin and Owen Biddle. The marble surround is typical for the area. The bricked-in firebox is a Rumford – modern for the time - designed to radiate the heat of the fire into the room.
By 1830, cast iron stoves were widely used. The chases for stove pipes are visible in the bedrooms.

The cupboards on each side of the fireplace were for dishes, herbs, spices and medicines as well as books and writing supplies. Notice how the modern, short window is an uncomplimentary shape.

Dismantling the house may uncover traces of a wall separated the living room from a front hall with its stair case anchored by a graceful newel, well scaled to the small space.
The oval rail fits well in the hand.
Square balusters march up the stairs and around the hall above. To turn 40 balusters by hand for the railing and have them all match would have been a tour de force in 1790. However a cabinet maker could readily turn one newel post.  It, like the front entrance, is Neo- Classical, the emerging style c. 1800. 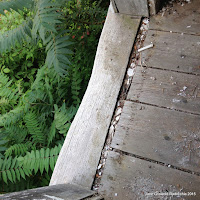 For over 200 years people have lived here, loving the house, adapting it to their needs. Their footsteps have worn away the door sills.

The house itself is still strong.  I am happy to help send it to a new owner. Here it is coming down, board by board, brick by brick. 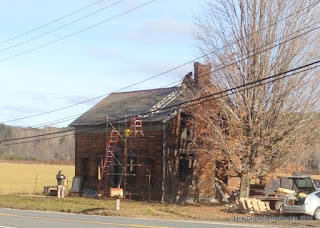 What a perfectly splendid project. And what a charming vernacular house.

I'm fascinated by it and can't wait to see the finished product as reconstructed.