An addition to a modular home

My first job after MIT was with a company which built modular homes. So I was quite interested and curious when a family called about 8 years ago, asking for help expanding their modular home.

The house was set on a hill with a garage under the kitchen wing. It was sturdy, as I expected: frames which have to travel to their destination are usually built to withstand jars and jolts. However, the garage had no space left for the cars, and the house did not adapt well to company, or have good access to the backyard. 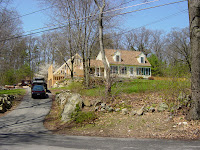 Could I help design a wing?

This was one of those times when the owners knew quite a lot about what they wanted in a wing: how big it needed to be, what spaces were required, where it should go, but not how to make it look "right". They had some sketches - which they didn't like.

The first picture shows the existing house as the framing of the wing commences. The second shows the completed wing. 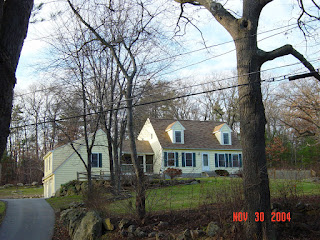 The right look was an addition which did not overwhelm the house, a roof line which made the wing subservient, a style that complimented the traditional cape with its center entrance and balanced dormers.
In eastern New England houses were (and are today) often expanded in a rhythm: main house block, a smaller wing or two, a barn. Here the family room wing with garage and mud room below are detailed as a barn - at least from the street - lots of blank wall, only one window, simple lines. The slope of the roof - the same slope as the main house roof - brings the eye down to the land, in this case the driveway. The roof running above the garage doors cuts the height of the 2 story space, making the 2nd floor family room appear as a dormer. As the house sits quietly on the land, so does the wing, not above it. The wing is in scale with the original modest house.

The expansion rhythm is often quoted as " Big House, Little House, Back House, Barn" an old jump rope rhyme as well as the title to an excellent book.