The Old First Church Windows in the Lantern 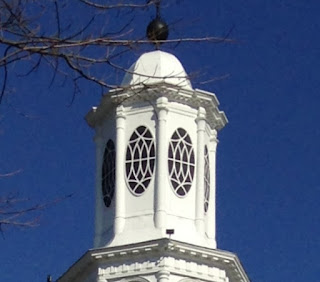 The windows in the lantern of the Old First Church in Bennington, VT, are pretend,  a frame with black paint in between the  muntins.

This part of the church steeple has a small trap door, 14 ft above the platform, not an easy access. The post which supports the weather vane is in its middle. Repairing broken windows would require scaffolding. 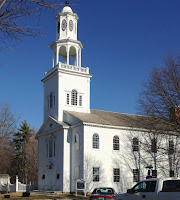 Look up. Does it matter? Would the effect be different with glass? 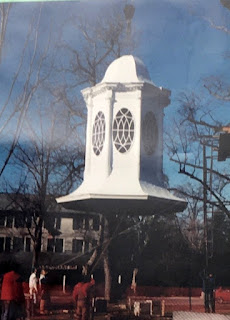 In the 1980's, the church steeple was repaired. In order to replace the rotted frame the lantern was removed. It sat in front of the church for several months. The photograph shows the lantern, suspended from a crane's hook, being lowered onto a base. 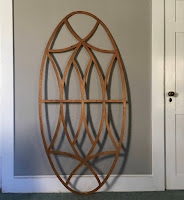 Charles Dewey, a local historian and skilled joiner, created  a wood replica of the false windows' layout for the painters. On it he wrote: "SAVE" and  "template for steeple lantern false windows, 1984 restoration". The template is 33" wide x 72" tall.

This pattern is big enough and simple enough to be a clear, final statement at the very top of the steeple, complimenting the 6 columns, their corbels and capitals, and the lantern's curved dome.

What was the geometry?

The first diagrams are the pattern used for all the windows in the church*.  The circles are laid out on a line. Every time a circles cross the line it makes 2 points which can define a new circle - one on either side here.

The next circle crosses the original circle at 2 points,  making a vertical line, bisecting a shape with 2 curved sides - a 'vesica piscis' (Latin for 'fish bladder') and give a new point where the new line cross the center line. The new point can become the center for a new circle.

The 2nd floor arched windows and the Palladian windows of the church use half of this pattern for their muntins.

If the whole circle is used it looks like this.

Here is the center half of the pattern. This is the shape of the 6 faux windows. 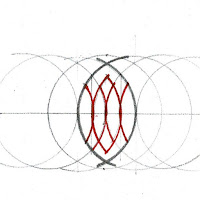 Note that in the diagram above the red arcs cross the underlying circles twice, at the top and bottom. Given 2 points a straight line can be drawn, crossing  the center line, giving a new center for a circle - or here for arcs which outline 4  smaller vesicae piscis. 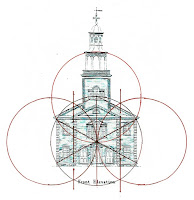 The curves at the bottom and the top of the window frame come from the geometry of the church design, As seen here the chains of circles which govern the plans and elevations of the church are both horizontal and vertical.

Here are the horizontal circles in my first diagram above turned vertically. 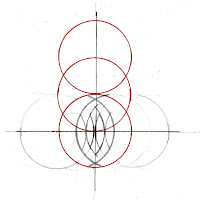 The vertical series laid over the horizontal series of circles with the interior muntin pattern shown. 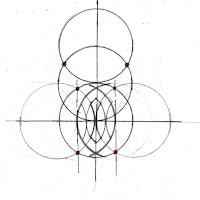 4 points marked where the horizontal circles cross, allowing connecting lines to be drawn - light dashed vertical lines which mark the edges of the muntins. The points above mark where the vertical circles cross. 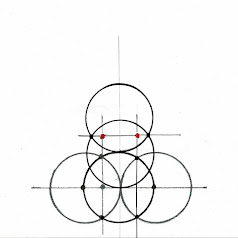 Extend the vertical lines and the horizontal lines so they cross.  The points where they cross are the centers for the circles whose circumferences edge the lantern's vesica piscis faux window.

I have not extended the vertical circles nor drawn the lines for the bottom of the window. It is identical to this pattern. 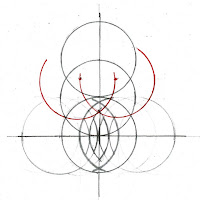 Those circles, added here in red, form the lower and upper muntins.

If fully drawn and continued they would add  horizontal chains of circles above and below the original center chain and intersecting that chain. 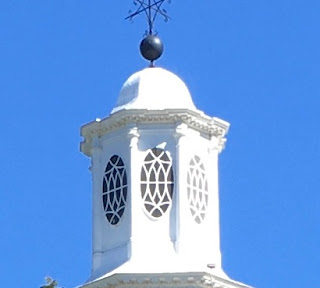 These patterns were difficult to draw accurately by hand at a small scale.  I plan to lay them out again, full scale, on a framing floor to see how easily they come together.

*Links to those blog posts will be added to this post.