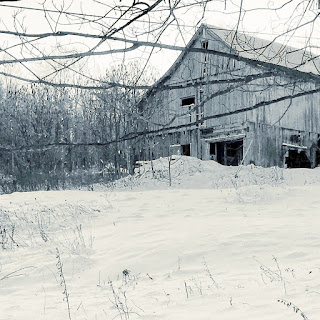 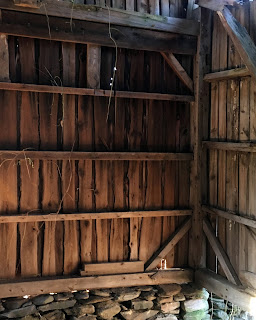 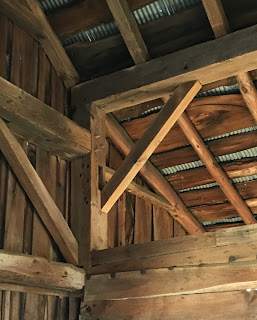 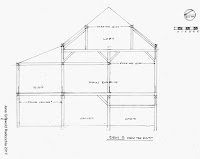 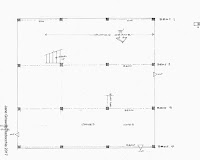 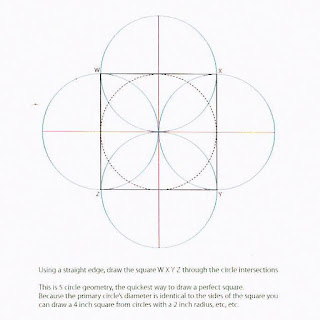 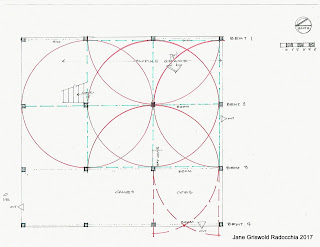 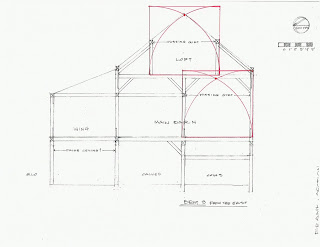 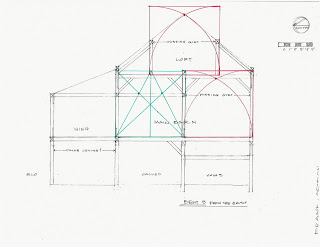 How Practical Geometry is practical

This is a sequel to my previous post: http://www.jgrarchitect.com/2017/11/the-tuckahoe-cabin-geometry.html

Do I think the carpenter who laid out the small simple cabin at Tuckahoe actually drew the arcs on the  ground? or on the floor  - once he had squared the foundation and set the sills?

No, I think he knew the geometry. Someone had already taught him what I drew.
I think he swung the arcs but marked only the foot or so where he  knew the crossings would be. He knew that he wanted to locate the center of each wall, and  - by basic geometric rules - he needed 2 points to draw a line perpendicular or parallel to the wall in question. 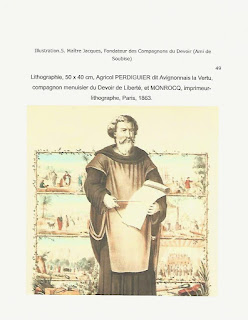 Here is a lithograph of le Pere Soubise, patron saint of the Campagnons, French carpenters who have finished their apprenticeships and begin traveling from town to town, from job to job to learn new skills. (In English an Apprentice becomes a Journeyman at this stage of his training because he 'journeys'. When he has gained enough experience he is then eligible to become a Master.)

le Pere Soubin is probably mythical. But the date of his portrait is known: 1882. Click on the print to read the attribution.
In 1882 a portrait of an important man included the tool of his trade: le Pere Soubise holds a compass. 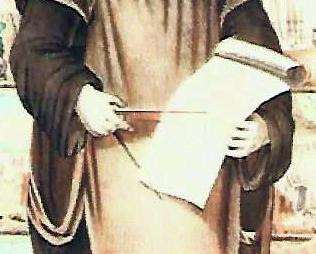 I have enlarged that part of the image. He holds his hand in  a way that he would if he were using the compass to measure a distance based on the drawing held in his other arm. Or as he would to  mark joist pocket locations on a beam, stepping off from one to the next.

Today a carpenter marks stud spacing with a tape measure that has multiples of 16" highlighted in red. The carpenter doesn't count 16" each time, he uses the tape's marking as a shorthand.
Similarly the framer in 1860 did not need to swing the arc from one point to the next, he used the compass to keep his spacing consistent. 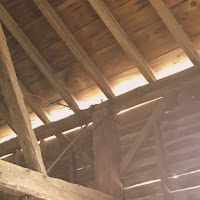 As I was writing this a timber framer who did a lot of repair of old barns mentioned that he often found common rafters laid out at 39.5".
I laughed and told him he had given me a challenge: Why 39.5"?


Here's the  geometry.
The framer knows he will use  3" wide rafters on each end of his 40 ft long  barn, so he will have 474" in between for his rafters.
He wants to figure out what distance will work so he can tell the men working with him where to set the rafters and cut the pockets in the plate. The plate is sitting right there in his framing yard -  which might be the floor of the barn he is building.

He could make a scale drawing on a board and scale up to the plate using his compass, like this: 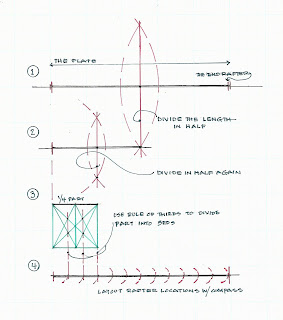 Or he could stretch his line the length of the plate between his end rafters. Then fold the line in half and and then half again. Now he had the length of the plate divided into 4 equal Parts. ( #1 , # 2)
He thinks 12 rafters should do it. That means 3 rafters for each Part. But what's the spacing? On the framing floor he draws out a square using the Part as the side.  The handy Rule of Thirds quickly divides the square into 3 equal rectangles and the Part into 3 equal lengths. (#3)
4 parts x 3 divisions = 12 rafters. Good to go.
He doesn't care that the length of each is 39.5". He cares that he has divided his plate evenly. (#4)


Note that the framer does not add, subtract, multiply or divide. He could show this system to someone who spoke a different language. Neither would need know how to read words or compute. They would need to be able to think logically and reason visually.  Geometry is a language in itself.

By the 1860's  - the time of the Pere Soubise portrait - both France and England had standardized dimensions (meters in France, feet and yards in England). Tape measures existed  but were not widely used. Wooden folding rules were popular after the Civil War,  but carpenters still understood and used compasses for layout and design.

I have met young timber framers who journey as Compagnons.
For more information about the French Compagonnage historically and today:
http://www.historicalcarpentry.com/compagnonnage.html
And note the compass leaning against a beam in the first engraving.