A Cabin on Magnolia Plantation, Louisiana 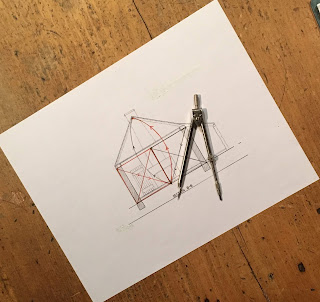 May 14, 2019. I have rewritten this post. The new one is based on being there.
I will leave this one for a while  since so many people have read it. The comparison between  analysis by HABS drawing and an actual site visit is worth noting.  The italicized notes were added as I saw what I had mistaken.

I will be in Natchitoches, Louisiana, April 23- 25, teaching Practical Geometry, in a full day workshop on Thursday, and 2 hr. workshops on Friday and Saturday.

This image - the cross section of a cabin, built c, 1830, on the Magnolia Plantation, its geometry and a compass - is my on-line poster for the Thursday workshop. It and a description of the workshop is now posted on the Preservation Trades Network website: www.ptn.org

uiul
I have the HABS drawings for this cabin, but no picture, as I have not seen yet it.
I hope to visit when I am at the conference. It's too easy to miss something essential when I work on the geometry of a building I have not be in and around. On the other hand, including local buildings in my workshops and power point talks is important, and researching their geometry will help me see them more clearly when I am there.

This cabin has brick walls. It has 2 rooms with back to back fireplaces in the center. The floor plan begins with a square space and its diagonal used as a radius to draw an arc. Then another square space was added on the other side. The space created by the arc is for these fireplaces - possibly including their foundations.
Follow the  black  line and arc with arrows and the red line and arc with arrows.
This layout is possible. The layout inside the brick wall (see the new post) is simpler and would have easier to to build. 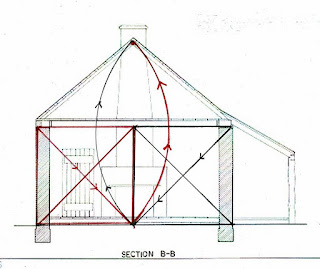 The squares could be moved up; base on floor, top on the rafters. But then the arc would be above the roof line. 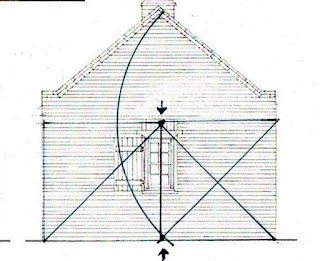 The end elevation matches the section and locates  the window - see arrows.

The side elevation continues the pattern: 2 squares on either side of the center partition, the windows centered on the double square. The red square shows both the partition location, left, and the window location, right. This geometry is not consistent with the construction that I saw. I redrew the elevations.

There are 2 issues I can't resolve without more knowledge of the building and its construction.

1) The window locations on the floor plan do not match those on the end elevation. Which should I use for my analysis?  Most were added later. I can ignore them when I look at the geometry.
Most of the brick houses I have studied use geometry to mark where an opening begins rather than a center line. This is why I think my geometry here is wrong and that in the new post is right.

2) I do not know enough about brick construction in Louisiana to make educated assumptions about framing.
How do the floor and the walls join? Is there a sill?  There seems to be a plate. How is the roof framed? What is the reason the end walls are higher than the sides? Some of this I could not see. People could tell me about details that they had worked on.
The site appears level in the drawing,  with brick footings maybe 18" deep, slightly wider than the walls. Is that the whole foundation? Yes The footings are about 12" deep.Is there a foundation for the chimney? I did not find out about the chimneys.
All the buildings whose geometry I've analyzed have been no farther south than Virginia. Their geometry begins at the place where a flat base, a foundation, can be set true and level. Where is that here? Has this to do with climate or topography? Topography.

I look forward my visit.

The NPS has several articles about slavery in Louisiana including this: https://www.nps.gov/cari/learn/historyculture/african-american-history.htm

The HABS drawings call this a "slave cabin".  I refer to it as a cabin.
The first people who lived here probably were enslaved. They were people first, with skills and families. Maybe their names have been recorded, possibly connected to this cabin. Later free blacks and Creoles lived in these houses at the plantation.
Maybe a mason or a brick maker lived here and I am studying his skill and knowledge.
I have learned that on some plantations tutors and overseers who were not enslaved often  had similar housing.
This is a "cabin".

Email ThisBlogThis!Share to TwitterShare to FacebookShare to Pinterest
Labels: c. 1845, cabin, diagonal of the square, Louisiana, Magnolia Plantation, rule of thirds, square and its arc 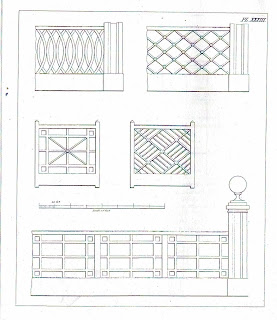 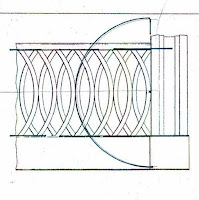 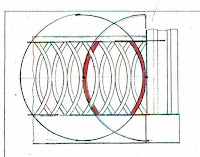 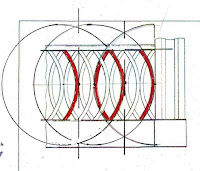 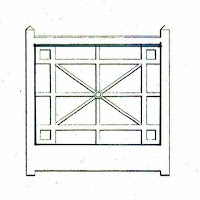 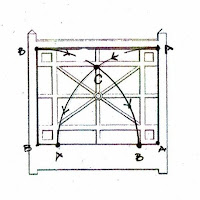 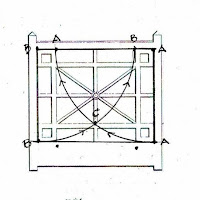 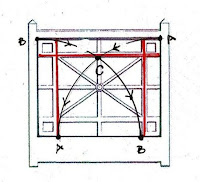