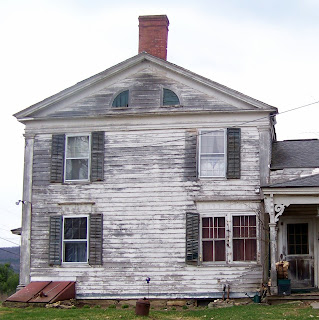 The Vail House was deconstructed this past summer for repair and reconstruction in another town.


It was once one of the most stylish houses in Bennington, its architraves and columns more complex than most local houses, its fanlight and surround unique to this part of Vermont.
Similar details exist on a few houses across the border in New York.

The Victorian updating can be seen here - the double windows on the first floor, right, and the porch with curly brackets   Well executed at the time and then let go.
I measured and photographed it about 4 years ago. I wish I had documented it more carefully. I have no image of the front of the house! 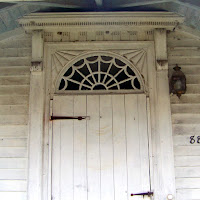 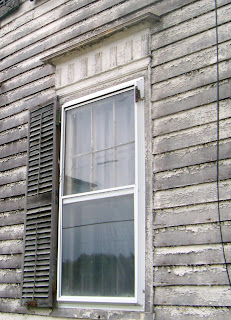 On September 16, I will include its  geometry as part of my presentation  'Practical Geometry' for the Bennington Historical Society lecture series at the Bennington Museum. 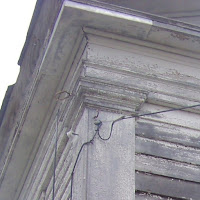 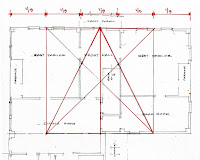 The family wanted a broad front hall with space for a sweeping staircase. This was the new style. The framer's answer was to  add 1/3 of the width to each side. The red square in the center shows how this worked. It was divided into 3 equal parts using the Rule of Thirds.
The house was to be 3 parts  deep and 5 parts wide. 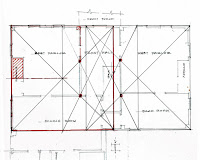 As you can see the division into 3 is not quite where the posts and beams are.
While the size was set by an addition of proportional lengths, the rooms were set by a different application of the Rule of Thirds . I call it 'Crosses Squares' .
Each side is a square, the Rule of Thirds applied to each side makes the front rooms square, the back rooms long and skinny, The posts and beams are set where the walls will be.
Usually the front hall will be the width of the extra third. Here you can see that it is wider.  Or perhaps the house is wider... slide those
squares on each side towards each other about a 12" and the  crosses squares would mesh.

The floor plan is traditional for this part of Vermont: 2 square front rooms, a long skinny space in the back divided into smaller rooms, the plan of a salt box. I wrote about this in an earlier post:  http://www.jgrarchitect.com/2016/06/the-persistence-of-saltbox-floor-plan.htm 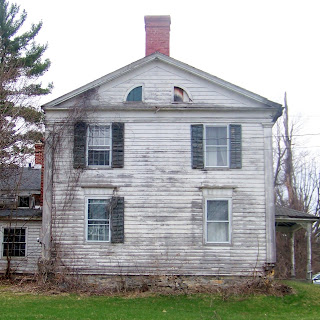 This is the west elevation. The shutters are a later addition.

Here is the Practical Geometry: a square in the middle, with the left and right sides 1/4 of the whole. The Lines locate the windows' size and placement. The sash themselves are squares, which is in keeping with the layout. The  decorative architrave's height is determined by the half of the square.

As I did not measure the exterior extensively I have not tried to layout the geometry of the corner boards or the frieze.
The photographs show that I have not accurately located the quarter circle vents in the eaves.  They are farther apart than I drew them, The proper location is probably on the 1/4 line of the square.
I think the roof pitch matches the Lines which divide the square into quarters - or the dash dot line I use to call out the left quarter of the house. This would be a logical choice:  a natural choice, using proportions the framer already is working with and also complementing the design of the house. 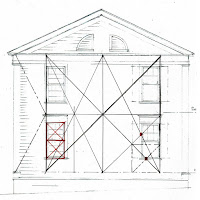 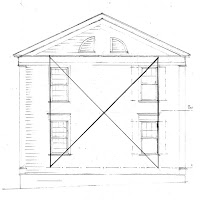 Thanks for this analysis! I am a distant relative of the Vail family and remember visiting the farm when I was a child (0ver 509 years ago). Do you know where this house was moved to?

it was dismantled and placed in a storage container which was moved to another part of Vermont. I do not think it has rebuilt. Unfortunately, I expect that the parts just sit in a box. I loved coming along on Vail Road and seeing the house. I am sorry it is gone.

Thanks for your response, Jane. I guess I'm glad that the parts were salvaged, but it's hard to believe that the old homestead is gone! It would have been such a disappointment to my mother, whose own mother grew up on the farm; but it was in a state of disrepair. Again, my thanks to you for posting this! David