The house recorded by Henry Glassie in Folk Housing in Middle Virginia * were basic shelter for people with few resources. They may have been the first house for someone homesteading, built by a sharecropper or by someone enslaved.

This is Fig. 35, The Parrish House, a "small mid-eighteenth-century house of sawed logs", p. 84 in Glassie's book.*

The geometric diagrams I drew in May 2014,** were accurate but much too complex for these houses. More importantly they didn't begin as a carpenter would: with the size of the foundation and the floor plan.

The red line across the bottom of the floor plan is 'how long', about 21 ft. That distance can be the beginning of the layout, the first Line that determines all the others.

That Line can be the radius for a circle: 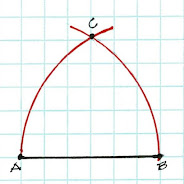 The arcs of the Line A-B cross at C. That's the center of the circle for the layout of this house.

In the diagrams below: 1) B-C is the radius of the circle. 2) Beginning with B on the circumference  the arcs of the daisy wheel are added. The 6 even spaced points around the circle A, B, D, E, F, G  are located. 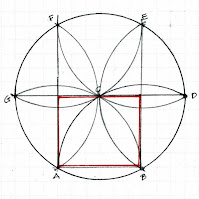 Connect the Lines. A-F and B-E are perpendicular to A-B. G-D is the diameter. They mark the width and length of the rectangle for the house plan.  If there is a question about accuracy, diagonals can be used to true the shape. 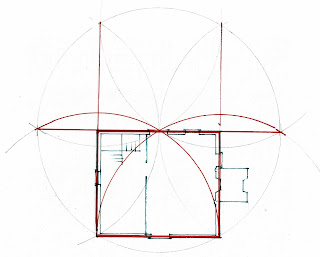 Here is the plan within its circle, the circle that begins with the carpenter's choice of width, his 'module'.

The masonry block for the 2 chimneys is square, centered, and 1/3 of the width the house. Glassie's photograph shows a shed sheltering that fireplace.

*Henry Glassie, Folk Housing in Middle Virginia, U Tennessee Press, 1975. The book includes more information, drawings, and a photograph of the house. It no longer exists.

I considered deleting the 2 posts, but their existence brought a comment and question which prompted this update.

As I read them I realize how much I have learned about geometry since 2014. I saw it and tried to explain it, just as Henry Glassie did in his Rules, Chapter IV, The Architectural Competence.

When I began to study Practical Geometry there were no books, no one for discussions or critiques. I was teaching myself, reading early pattern books line by line. Laurie Smith was the only person I knew who saw geometry as I did, and he was in the UK. Later that year he came to the States; I took a workshop with him. I was able to work with him until his death last year.

I don't want this information to be lost again. I want others to find it, question it, reject and/or improve upon my analysis, their own analysis, expand our understanding.