Beatty-Cramer House and its daisy wheel, Part 1 of 2 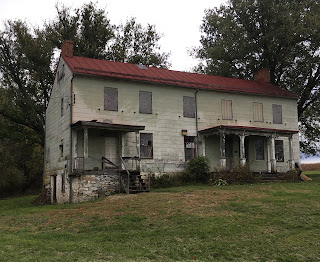 This house in Maryland was about to be burned down because its owner had no use for it. It looked to be a c.1850 farm house that might have also been an inn. 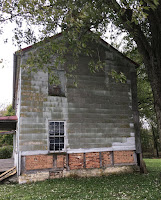 A local historian asked to look at it.
He had seen the frame and the brick nogging (infill between the posts used for insulation) where the siding was missing on the end. Both looked to be Dutch, not English; the spacing appropriate for a Dutch jambless fireplace. The post below the window had been cut to make room for the window.
What had it been when it was built? 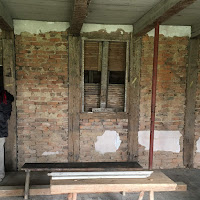 Inside he found another house, 1-1/2  stories: the main room on the north end with beams 4 ft apart supporting the 2nd floor.
The original kitchen to the south end had been down half a story. It opened out on grade to the well house  a little farther down the slope. 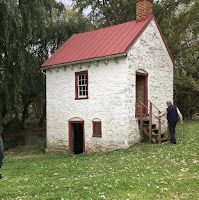 This 'inner house' is the Beatty House, built in the early 1730's by the family of Susannah Beatty who moved here from Ulster County, NY.  The property is now owned by Frederick County Landmarks Foundation.
The Beatty House is 20 ft. x-.40ft., story and a half with a lower kitchen, and an H-bent timber frame, an Anglo-Dutch style found most often in New York.
The well house, just south of the main house, had a well below and a smoke house above. The Foundation has restored it. 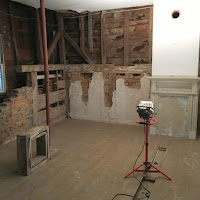 In the 1850's, new owners, the  Cramers, dramatically remodeled.
The windows were relocated; the old openings blocked.
The half story split of the wings was eliminated; the 2nd floor gained full head room.

All of this was done by building a new structure around the original  house. 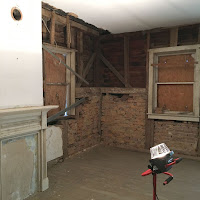 The photographs shows the original 2nd floor half story with the new house wall behind it. The views are to the northeast corner and the southeast corner. The end of the plate - where it was cut off  for a window - is visible in the northwest view. I've added a close up view below.

The southeast view shows the new windows cut into the original frame. Also note the original nogging in all the photographs. 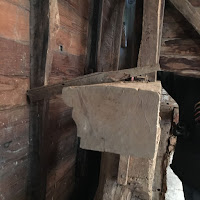 On the second floor the plate, which had been carved to be the fascia and soffit for the roof overhang, was left in place. The new house was simply framed outside of it. 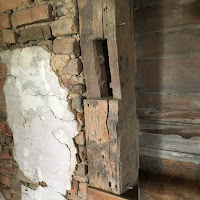 As shown above, much of the history of the house is visible in the frame. Here is the mortise for a missing beam.

There are remainders like this all over the house. The original frame can be read, and the later renovations too. The attic over the raised south end - the c. 1850 kitchen and bedroom wing - was framed with reused rafters: many with scribe marks but not in order. 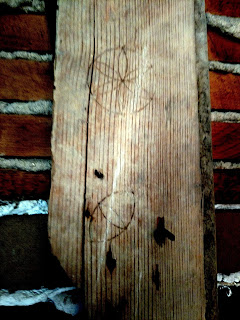 Could I discover how/if these diagrams governed the layout?

The Foundation had measured drawings of the Beatty House - the original house. They gave me a set.
I began to look.
Of course the builder considered the land, the size of the house, what rooms were needed, how situated. He knew how he would frame, where the windows and hearth were to be located. Much of this would have been tradition.
The siting was specific to this location: the wall facing the road and the width of the house were known before the actual staking of the Lines. 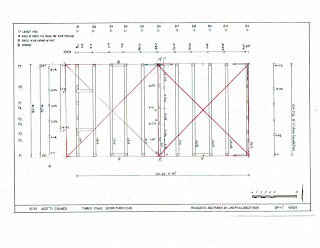 This is framing layout for the bents to support the second floor.
East is to the right. 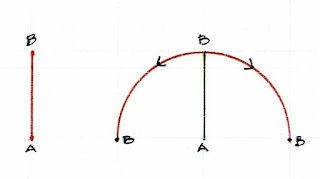 The east room is a square. The west room is less than a square. The framing is shown for the jambless fireplace in the south room, that for the north room is missing. The ends of the tie beams are still there in the exterior east wall.


I found that the plan could be determined by the 'eye', the 3 petals of a daisy wheel.
Here is an introduction to how the diagrams can be used.

The first length is the Line A-B, the width of the house.
The Line becomes a radius for the arc  B-B-B. 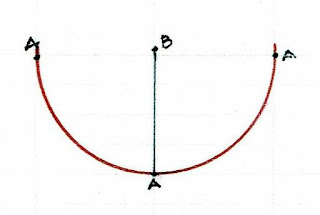 Switching ends of the Line - using B-A  instead of A-B as a radius - creates the arc A-A-A. 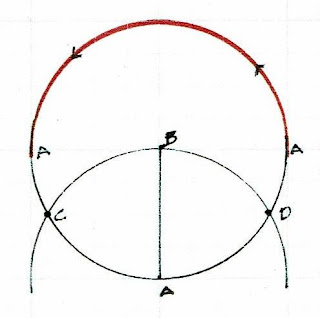 Both arcs can easily be laid out together. They create the Eye: A-C-B-D. 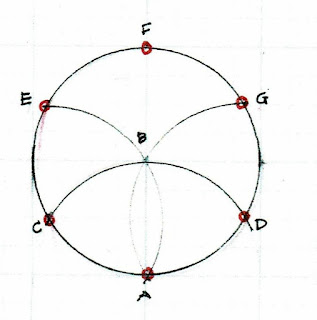 6 evenly spaced points on the circumference of the circle are easy to mark:  A-D=G-F-E-C-A.


Don't groan!
There are people in my workshops who need this step by step instruction.
There are people who tell me this is poppy cock.
Both groups have little knowledge of geometry, and thus no understanding of  how Geometry can be Practical or why a compass is a construction tool. 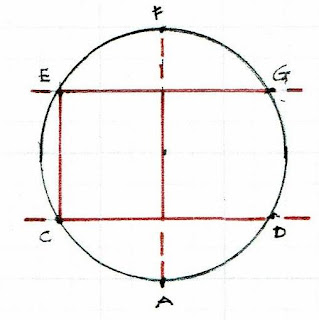 To reiterate: The eye is 3 petals of the daisy wheel. The length of one petal is the distance between the petal tips. It gives the builder his first dimension from which all the others come.
Here it is the width of the house.  Thus C-E is the  same length as A-B.
B, the center of the circle, is only a dot here for clarity.

C-E, C-D, and E-G  can all be drawn - all are straight lines between 2 points. Adding the center line A=F determines the rectangle that is the west side of the house. 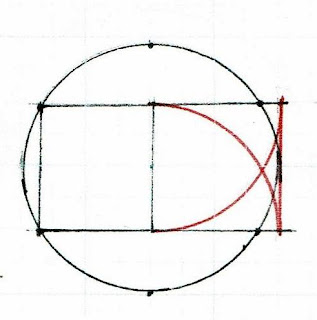 Extending Lines C-D and E-G beyond the edge of the circle and then using the radius to lay out a square for the east side of the house completes the floor plan.
Note that no measurements were needed to lay out this plan. All of it was done using the length of the width of the house. Twine and pegs  - and a good mind - would have been tools enough. 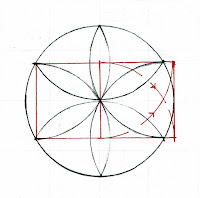 I first thought the house was laid out as described below.
Today I think not.
Still this is a clear clear description of how a house could be laid out with a given dimension, a Line (twine), and pegs. 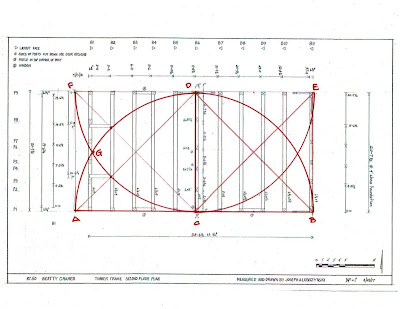 The 2 squares can be seen as 2 half circles.
The front wall is A-B;  initially it is a Line of unknown length.  The width of the house (C-D) is the radius. It is set where the builder thinks the wall between the 2 rooms should be.  With C as the center of the circle swing an arc from A to B.
Then with D as the center of a new circle, swing an arc from E to F.
G marks the intersection of both arcs.
The line perpendicular to A-B and D-C-E  at G, parallel to C-D  is the inside edge of the south wall of the south room.

G is located on the inside of the west wall. I've seen many barns and buildings whose dimensions begin from that side, or perhaps they end there.

Many buildings were laid out from the 'in' side of the sills. See my post of the Streetsboro, Ohio, Baptist Church. 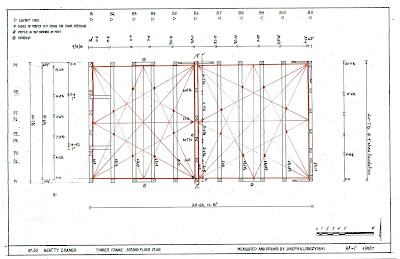 The bents for both rooms are easily laid out by the Rule of Thirds, begun at the inside of the sills. See the red rectangles laid out on the inside of the sills.
The narrower west room placed the bents symmetrically: 2 on the west sides, 2 on the east sides of the Lines.
The east room placed the bents on the east side of the Lines. This gave a little extra room for the jambless fireplace.
See the red spots on the sides of the bent.
The east and west sides of the house are not the same width. But once the spacing for the fireplace bent was set, a compass set at the right width could have been used to mark the other bent locations. Or the Lines could have been laid out on a framing floor.

The supporting side beams for the jambless fireplace were located at the quarter points of the exterior wall.
The builder could have marked the inside width of the west wall on his Line, folded the Line in half and then in half again. He would have the quarter points.

The elevations and the daisy wheel are in 'Beatty Cramer House and its Daisy Wheel, Part 2 of 2'.

For an introduction to the Rule of Thirds see: https://www.jgrarchitect.com/2016/10/practical-geometry-drawing-diagrams.html

Daisy wheels and eyes scratched into building walls or framing were common in England, I have seen them and other carved designs in houses and churches in the UK. In the UK, they were used superstitiously to keep witches or other bad phenomenon at bay.

Hello 'unknown'.
Please check out the work of Laurie Smith, an English timber framer and geometer who lectures for the National Trust. He can show you how geometry - daisy wheels and eyes included - was used in construction.
You might like to read about Peter Nicholson in my blog and my posts on master builders' portraits which include their compasses. Do you think they are holding them to ward off evil?

Here is Laurie Smith's website. http://historicbuildinggeometry.uk/
I hope you enjoy it; his graphics are much more polished than mine.