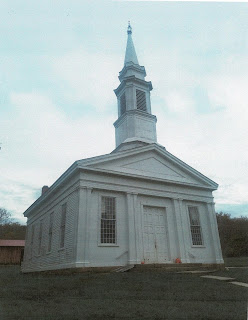 This post about the Streetsboro Baptist Church, built c. 1820, is about the second phase of its construction - its decoration - the front facade and the steeple

The first post discussed how the framer used the geometry of the 3/4/5 Triangle to layout the floor, the bents, the walls and  windows, the roof and steeple.

Often in pre-Civil War construction, after the framers made the building 'tight to the weather', the joiners did the finish work: window sash, doors, molding.  Different trades had different skills and tools. 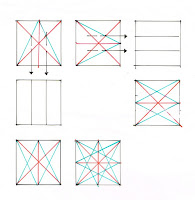 I think this division of labor happened here. The geometry for the front of the church is not the 3/4/5 Triangle but the square and its division by the Rule of Thirds and the Rolling Star

The diagram on the right describes how a square divided in half with its diagonals (noted in red) can be divided into 3 equal rectangles by adding lines from the center of one side to the corners on the opposite side (noted in green). The layered lines make a star that is continuous (follow one line and see!) This pattern is sometimes called 'the rolling star'. We do not know what name the carpenters gave it. 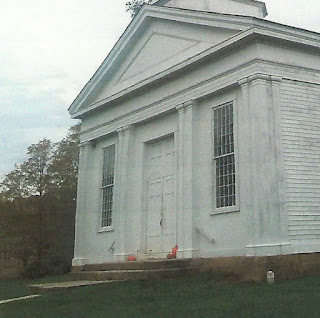 Here is a close-up of the church front on a cloudy day in October. 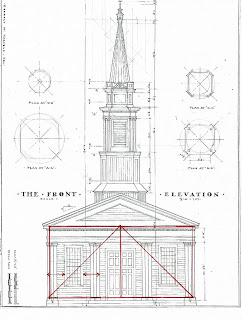 The joiner saw his facade as 2 squares, or as one square in the middle and a half on either side - see the next diagram.


The windows had been placed by the framer. The pilasters on each side needed to be equidistant (see the red arrows). He had to include that in his layout. He needed to decide:

How deep would the frieze be? The architrave? the capitals?
What is the size of the door?
How does he integrate the pilasters' placement with the door? 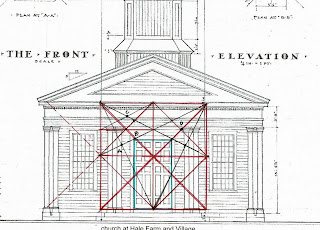 He used the control points (where 2 lines in the Rolling Star intersect).
(A) shows the double pilaster width as part of the star.
(B) locates the upper corners of the door, its height and width.
The door is set back just enough to be framed by the shadow of the wall.
(C) locates the division between the architrave and the frieze. That band of molding circles the church. It and the molding which outlines the pediment make the building whole. Without them the front would seem just plastered on the front of a box, the roof unimportant.
(D) gives the height of the pilasters' shafts and the beginning of the capitals.

The bases of the pilasters extend as far down as necessary to cover the sill and sit proud of the foundation. They are actually the water table working its way around the ends of the pilaster shafts. 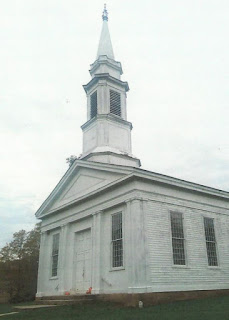 Providing a base to support the steeple was the job of the framers. Its dimensions at the roof are based on the 3/4/5 Triangle. 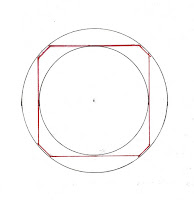 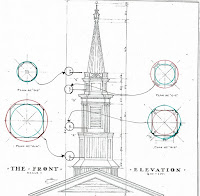 The steeple uses neither the geometry of the frame nor that of the front facade. It is a series of blocks, decreasing in size, with their corners clipped. The design uses the square and the circles that fit within and without it. Was it the work of the same joiner?

The HABS drawing above shows the steeple sections. 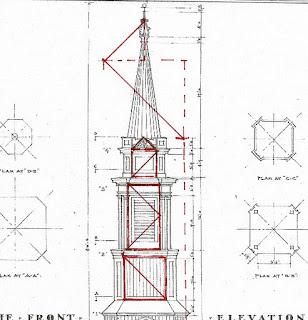 The moldings on those edges and the series of roofs as the tower extends create patterns of shadow and light. 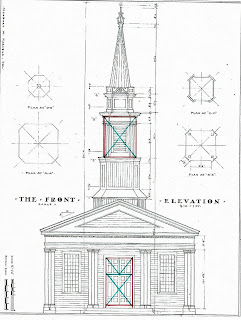 The  height and width of the door comes from the geometry of the Rule of Thirds. But a 3/4/5 triangle is part of a 4/4 square; so the door - 3units by 4 units rectangle below and a half above - is also part of the dimensions of the church itself. See the green diagonals at the door.

The section of the steeple which holds the bell is also a 3 x 4 rectangle.
The windows, not marked here, are double 3x4 rectangles.

Look again at the first picture. The church's grace and presence come from a simple manipulation of proportion in the design and the use of light and shadow to emphasize its character.

* The Sandown, NH, Meeting House and Gunston Hall in Virginia are good examples of this separation of craft. At Sandown a skilled joiner built the main door and the pulpit, perhaps the wainscotting and box pews. George Mason of Gunston Hall brought William Buckland from England to create the porches and interiors for his new brick house.

I was wondering how much math is involved with architecture?

I'm sorry to take so long to answer.

Architecture is math and physics. Buildings are real, they are made with materials with physical properties and dimensions.
Architects must be able to think in 3 and 4 dimensions: width, length, height and time. We must understand how materials will work in all those dimensions. We also must be able to explain those ideas to others so we can create a building together; that requires mathematics.