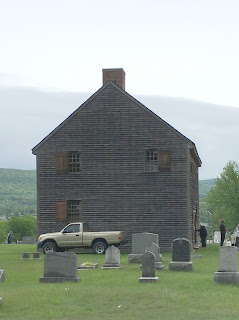 Update: 10/25/2017
To check the reliability of the HABS drawings  I measured the Meeting House this month. Yes, the drawings used here are accurate.


This Meeting House for the East Hoosuck Society of Friends (Quakers), built in 1786, is now a museum in Adams, Massachusetts. It sits high on  a hill in its cemetery, looking east over the Hoosic River to the Berkshire mountains. This is its west side.

As I was creating a handout for the guides about the scribe rule markings visible on the frame, I wondered what the geometry might be. Quaker communities existed nearby in New York, Pennsylvania, and New Jersey. We knew Quakers migrated up the Hudson River watershed from Rhode Island and Nantucket after the  Revolution. Would I see similarities to other frames I had measured?
I did see similar ways of laying out a frame. However, without more research I cannot say these layouts were particular to Quakers.

The Friends Meeting would have told the master carpenter how large the building should be,  that windows were needed for light and ventilation, fireplaces for warmth. These Friends knew that the door should face south,  that the wind here came around the mountain from the northwest, that a chimney is best supported by bringing it through the roof at its peak. 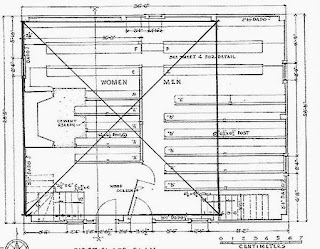 The framer would have began with the floor plan; so I did too.  He made the meeting house 28' wide on the west end; the posts set in the corners.

He laid out a square from the inside of the posts and marked locations for  posts on the corners.*

Why would he have begun his layout on the inside edge of the posts?

Perhaps because the trench in which to place the footings for the posts would be outside the line. The ground under the frame would not need to be excavated.

The plan could also be trued from the interior edge of the posts much more easily than from the exterior when the posts were in place: the diagonals would be made equal across the rectangle. Contractors today still 'true' foundations by pulling lines. 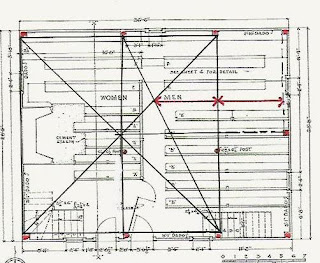 His center line located the middle posts on the north and south walls as well as the 8 sided posts that are located between the pews.

Using the Rule of Thirds, he laid out the eastern end. The location of the eastern wall posts is 1/3 the width of the main square beyond the square.
I have marked the 1/3 of the square and the extension with arrows in red.

The center line running east west determined the post on the east wall. 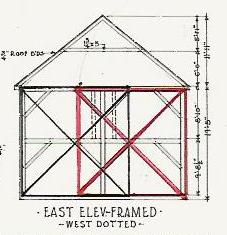 His post locations set, the framer laid out the 4 bents. This is the eastern exterior bent.

It uses crossed squares with the side of the square the height of the wall from floor to plate.
Even the braces follow the geometry. 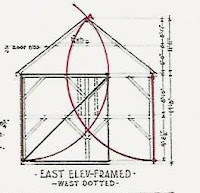 
This way of finding a ridge was also used in the Hartford, NY, barn I measured in  2014.    http://www.jgrarchitect.com/2014/12/a-hartford-new-york-barn-was-carefully.html 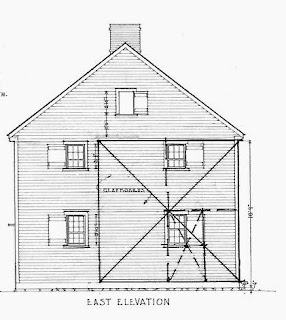 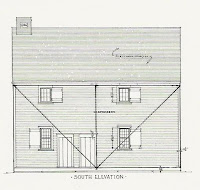 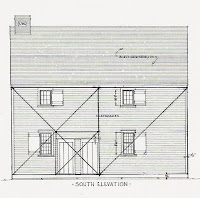 The south facade of the meeting house is 2 squares wide.

Quakers worshiped together, men and women, and children.

Their  Meetings for Business were held separately: women on the left, men on the right, with a wall between them which could be raised or lowered as needed. Thus the two doors which sit neatly within one quarter of the square.

The window sizes on the south side do not fit the geometry. They were probably enlarged  when the men's stair was added.
Both scribe and square rule framing details as well as joist pockets without joists indicate renovations.

For me it's fun to see how the first floor windows are located at the bottom of the stairs, where light would be needed for safety.


*The hybrid barns  in New Jersey which I looked at earlier were also laid out based on dimensions measured between the posts: http://www.jgrarchitect.com/2017/06/practical-geometry-for-hybrid-dutch.html

For more information about the Meeting House and the Quaker community in Adams please see: