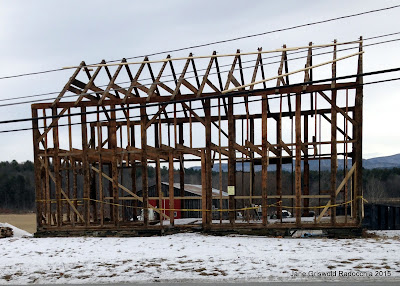 The house has been stripped to its frame. The sheathing removed, each board numbered as it came down. The stair and moldings (inside and out) carefully moved into storage.

Now the frame is visible -
no ridge beam,
12 bents: each is a post on either end mortised to a 2nd floor joist.
The plate across the top holds them all together; The 14 rafters sit on the plate and are not spaced to match the bents.

The joists on each end are mortised into posts.
Plates, mortised into the sides of the  posts, space the bents and carry the intermediate 2nd floor joists.

Here is a post with its joist and the pegs that hold the tenons of the plates seen from the outside.

Here seen from the inside, are: 2 posts, an intermediate stud; 2nd floor joists, plates and intermediate joists.
. 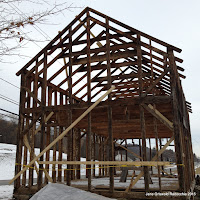 .
We think it was assembled bent by bent, the intermediate plates added one at a time as each bent was set into the sill.

I have measured the first floor - twice The first time it was just too cold. I hurried. I wasn't careful.

The framer used Hudson Valley Dutch framing. The house was clothed in the latest Federal style with possible Shaker influences. Inside it retains the traditional system.

I need to add more, especially about the Dutch way of framing.
An orthographic perspective would make the frame easier to read.
The frame details deserve a post of their own.
So does the careful cleaning and repair of the frame by Green Mountain Timber Frames.
I want to redraw the front elevation to reflect the frame we saw and measured compared to the plaster and clapboard surfaces I saw and measured in the beginning.

However, it is July, months later.  Time to share!


The link to  the men who took down and repaired this house, Green Mountain Timber Frames:  https://www.greenmountaintimberframes.com .

Flood Doctor will be there to fix the problem and restore your home back to normal as quickly as possible.
water damage restoration in Arlington Virginia