I find - in upstate New York and Vermont - different geometries. The steps that led from a line and a length to a post and beam frame seem to depend upon nationality. In general builders with  Dutch and German heritage began their layouts with circles. Carpenters whose ancestors came from English usually worked with rectangles. However, my data base is not large.  Therefore:

When Voices of the Turtledoves, The Sacred World of Ephrata, by Jeff Bach, was recommended to me at the Preservation Trades Network Workshops this summer, I bought it. And I read a lot of it, especially Chapter 5: "God's Holy Point of Rest": Ephrata's Mystical Language in Space and Time.

Bach writes that the Cloister's adaptation of "familiar patterns" of construction to sacred, mystical proportions "contributed to Ephrata's anticipation and awareness of God's presence." p. 115. 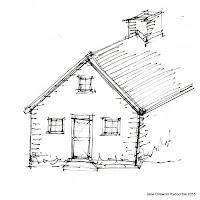 Here is my sketch of the house based on the dimensions and the houses illustrated in Fig 7, Jacob Hibshman's survey of Ephrata. page 122. It is not particularly handsome, just serviceable.

I was, of course, interested to see what geometry, what 'familiar patterns', had been used in the construction of a cabin, patterns which might been applied 50+ years later in New York and Vermont.

Secondly I was, and am, curious to see how the vernacular proportions might have become  mystical symbols and forms. That question is not answered here. 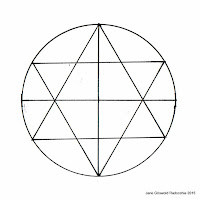 The mystical geometry which interested the Cloister's founder, George Conrad Beissel, is illustrated in Figures 9 - page 125 - :  a box composed of pyramids which meet in its center and

a circle bisected in both directions and its hexagrams -as copied here.

My question was:
How would a carpenter with a pair of dividers lay out a cabin?


I began with the diagram in Figure 9 because it is a very simple geometry, quite easy to lay out: a circle divided into 4 equal parts and the star that is determined by its radius. A carpenter with only a little training could have drawn this diagram to use as a reference for the cabin's dimensions. 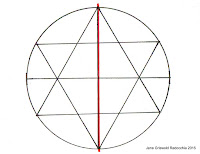 Assume that the circle's diameter - drawn at small scale - could be the cabin's length, 25 feet  - shown in red. 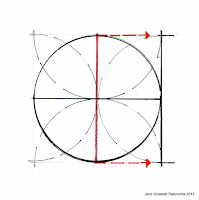 Move the 25 ft. length to the right side. This way of manipulating the circle is implicit in the crossing of the diameters - the division of the circle into halves and quarters. 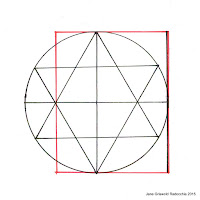 The width of the cabin, 20 feet from the outside of the circle - the red line on the right -  is determined by the intersection of the triangles on the left.
The floor plan of the cabin is outlined in red. 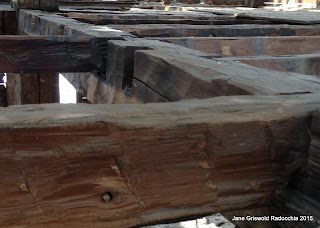 The description of the cabin says the height to the joists was 8'-6".
However, the joists were most likely let into the plate as seen here in another house frame.
A standard depth would have been 6". The height of the cabin from floor to plate probably was 9 feet. 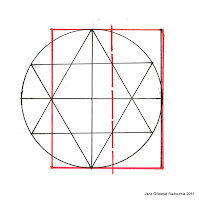 The dotted red line on the right side is 9 ft from the perimeter of the circle.

The cabin's dimensions were determined by 3 lines laid over 2 simple easily drawn forms organically related to each other.


This analysis is unusual for me. I usually write about buildings I know personally. I think, however the diagrams are worth sharing - so direct!  simple!

I should also note that the diagram would have been 'drawn' on a board with the dividers, then used as reference; the lengths scaled up from the drawing. Carpenters do this today when working out a framing problem, using a pencil  - or sometimes a nail. Boards with such markings are regularly found during repair and restoration in the sheathing of houses and barns. We often miss the marks because they can best be seen in a raking light - and carpenters tend not to look for them on old roof sheathing.

10/21/2015:
There are 85 entries in HABS/HAER  for Ephrata. I have looked at some. The geometric relationship between the hexagram, cube and mystical numbers and the Saal, for example, is not obvious. The plans and elevations, the 3 dimensional shapes of the rooms do not easily correspond with the diagram, nor with circles and triangles which are not overlaid.