This post, first published in 2014, has been revised based on a better understanding of the geometry. 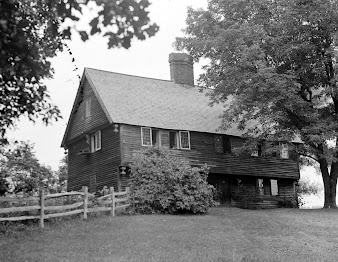 The story about this house:  It is still here because it was owned by an old Boston family with extensive land holdings.Their herdsmen drove cattle to market in Boston along Rte 1 (which is practically next door to this house) and  used the house as a way station on their trips into the city. So it wasn't torn down, updated, or abandoned. We are lucky.

The pictures are from the LOC HABS archive. Note the drops and brackets. The windows are casements; in the picture they have been swung open.
For more information and photographs in color see  http://www.topsfieldhistory.org/parson_capen.shtml

The geometry for the house is based on the square.

Here is how a square is derived using a compass, a straightedge and a scribe. 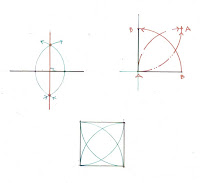 Once a carpenter knew his geometry he could layout a square in fewer steps.

The square with its arcs gives the carpenter 4 points - where the arcs cross each other - for dividing his square in half horizontally or vertically. This could have been used for the hall and the second floor beams. 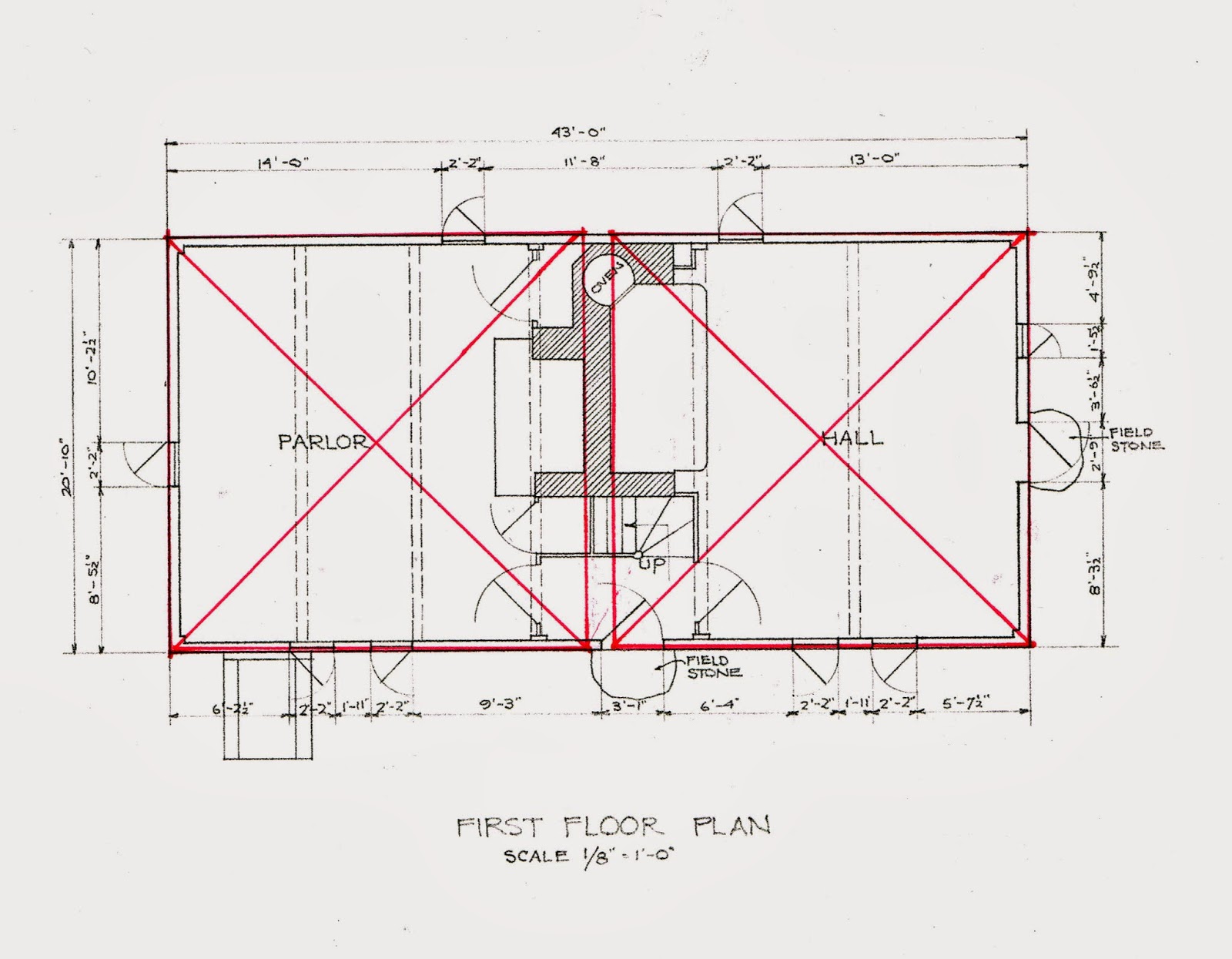 The chimney and fireplaces were to be in the middle of the house. So the builder laid out the house foundation from the chimney block. The diagram shows in the center the brick which would have formed the back wall of the 4 fireplaces  with 2 square spaces on either side: the parlor and the hall.

Next comes the fireplaces themselves, on both floors, and the flues. On the first floor the main masonry block is a square in plan, the oven needed half a square. Its flue joins the hall chimney. 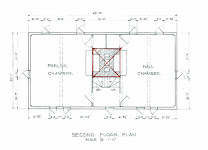 On the second floor the chimney mass is square. 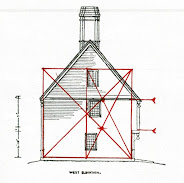 The house has 4 bents, one on each end and one on either side of the chimney mass.  The  fireplaces depths on the second floor determine where the 2 interior bents are placed. It's possible there are bents across the rooms as well. However, since the  summer beams on the first floor appear to be located over windows and the second floor beams do not match the first floor beams, I think not.
The Rule of Thirds was used to lay out the bents. It determined the heights of the floors and the placement of the windows. (The red arrows indicate ceiling heights.) 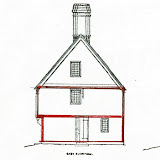 See this description for how the Rule of Thirds works: https://www.jgrarchitect.com/2020/08/lesson-6-rule-of-thirds-part-1_21.html 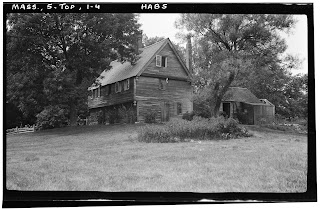 The second floor overhangs the first floor by about a foot on the south/front side. This was popular in England as a way to protect the daub and wattle walls from rain and wind. Here weather boards - known today as clapboards - covered the frame, but the tradition continued. The attic extends out over the second floor on the sides of the house for the same reason.

These HABS photographs are beautiful and clear. Click the images to enlarge them. 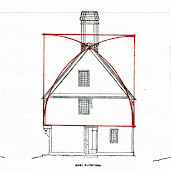 The roof pitch  and the placement of the ridge pole might have been laid out from the second floor.  I have seen this proportion - the crossed arcs of the side of the square - in other First Period houses, It may have been  used here.

Note the corbel beside the 2nd floor window which supports the roof overhang. 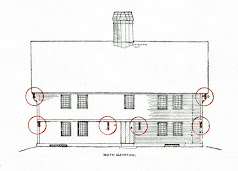 Here is the front elevation with the drops and corbels noted. They accent the ends of the cantilevered beams which are the top plates of the bents. 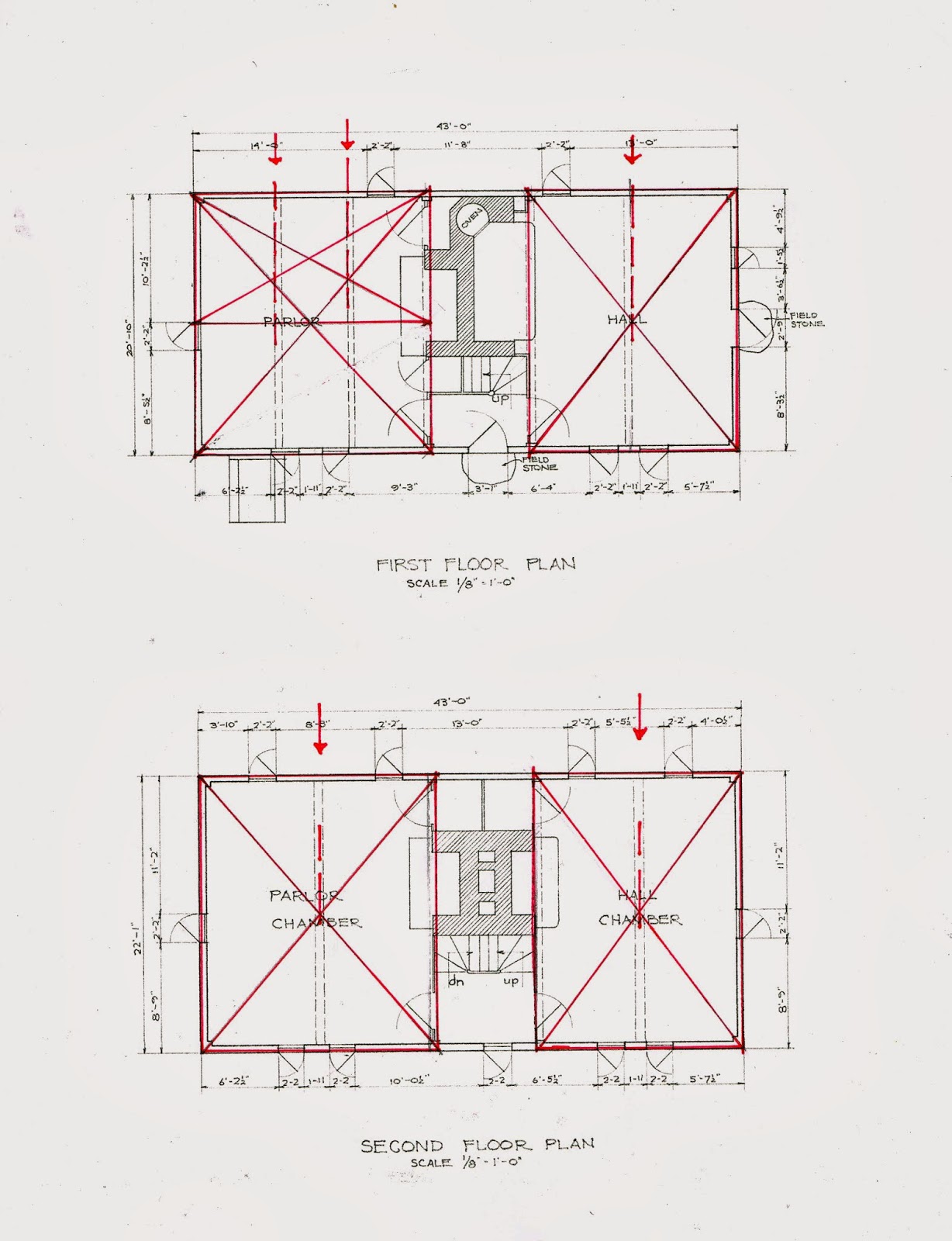 The beams:
In the hall the beam which supports the second floor joists was set in the center.
The parlor, the room to the left, is larger. It needed 2 beams. So the space is divided into thirds. These beams are joined to the beam that runs between the 2 bents on this side. The windows were placed where a post would be located under those beams if they were part of bents.

On the second floor  the ceiling beam are centered. All the beams appear to be set to the side of the lines, not on the line. 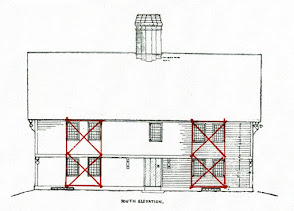 This drawing may be an accurate depiction of the front elevation. However, the plans are not quite consistent with this layout.  The windows might be set equidistant from the corners of the house, or not.  They may be centered on the second floor rooms, but not on those on the first floor.

Both sets are grouped together in the same geometry. The casement windows are all the same size.


The measured drawings for the Historic American Building Survey, HABS, were done at 1/8"= 1'-0", a scale which is fine for concept, but not good enough for serious consideration of  construction details.  They have very few dimensions. The drawings from 1916 do not quite agree with HABS.
Some observations:
* The Golden Section is not used here. I find that the Golden Section is about growth; houses are about stability.
* The front door is not centered on the facade; if it were the door could not be opened back against the front wall. The brackets sit under the 2nd floor beams extended to support the cantilever.

4/21/22: I wrote much of this 8 years ago. The layout of the foundation based on the location and size of the chimney back still makes sense. I revisited the framing and the elevations, understanding that the layout begins with the framer who must decide where the bents will be; how tall;  where the marks for the mortises and tenons will be. And how will the second floor and roof cantilevers be supported? I explored how a daisy wheel might have determined the layout. The results were messy. The points were not useful markers for building this frame.