( I need to take new picture of the store. Posting the whole tour, 40+ buildings, to the blog is a work in progress. Obviously the maps need to be here too.)

#1. Thatcher and Welling Store, 1833, The market was the mill store for the Welling’s paper mill. Thatcher was Edward Welling’s brother-in-law. The market is a Greek temple in brick. The curved bricks for the round columns were specially made for building columns. The second floor extension under the portico was added later. 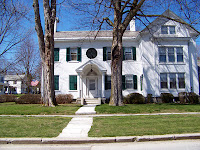 # 2 – EM Welling House, 1827, has 2 front doors. One faces Main Street. The other looked out over the Welling mill yard and store, to his factory on the site of Haviland's grist and saw mills. The house has been expanded over the years, each wing sympathetic to travelers coming into the square see the original house but with its own identity factory, on the site of Haviland’s grist and saw mills. This is the classic Georgian way to set a house, so it can be seen from a distance, as one approaches. 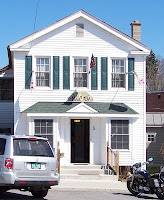 #3 – The Union Store originally sat where the McCullough Library is today. It was moved in 1920. It is a stripped down version of the Greek Revival style. The gable faces the street; the returns on the eaves suggest the pediments which are so clearly defined in the buildings on either side. Note that all 3 buildings, though different width and heights, have 3 windows - 3 bays - across the front.