The contractor called: the old door and its pediment were down, the new entrance was going up.
Of course, I showed up!

The original sheathing was exposed. But, almost no ghosting - the tell-tale signs of where the first entrance had been. Two boards showed evidence of a hand rail. A beam had been cut away a bit. Neither was enough to determine the original dimensions or profiles (the shape of the mouldings used). The contractor, joiner, and I all really wished there was more to look at, learn from.

The new door, sidelights and columns were in place. The men lifted the fanlight and its surround and set it above the door for me to see. The winter sunlight bouncing off the snow was brilliant. 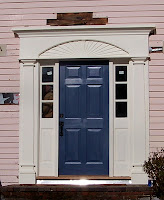 Not bad.
But hard to see: so white in the winter sunshine, jarring between the pink house and the blue door. As I expected, it looked too new: not enough layers of paint. The mouldings seemed fine: the shadows in the right places. The columns attenuated as they should, the fan shape right, but was it too flat? The 2009 door and sidelight seemed out of place: clearly modern. I was so involved I couldn't see it!

For me, this is a common reaction. I won't go back now for a while. I'll turn down the road as if by accident, and come across the house unexpectedly - and see then how it feels.