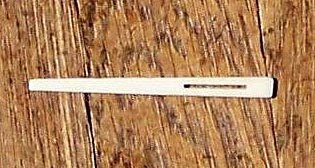 And although I can quilt and knit adequately, I'm no expert on needlework, so I learned a lot working on the exhibit. And now I've held a bodkin.